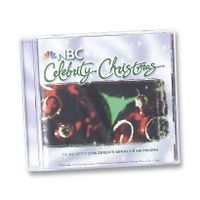 As noted above, I picked this up for mere pennies on eBay, purely for the novelty of it, never imagining that this would have any real musical value, when what to my wondering eyes would appear but the cream of studio session musicians backing up these tv stars, starting with that most amazing guitarist Tim Pierce on most of the tracks, with many tunes also featuring Leland Sklar on bass, Dave Koz on sax, David Spinozza on guitar, T-Bone Wolk on bass, Greg Phillinganes on Hammond B-3 organ, Jack White on drums, Bill Champlin on piano, John Molo on drums, and Everette Harp on sax. I guess we have to thank Loren Harriet and Mark Weiner, producers, for the quality of the music that might otherwise have resulted in nothing more than a vanity affair.

Sorry if I sound so surprised about all this, but I'm not even familiar with many of these shows/stars. Sean Hayes actually does a reasonable job on "The Christmas Song." Bebe Neuwirth & John Lithgow have some fun with "Baby, It's Cold Outside," and while the last thing we needed was another version of this warhorse, this time around it sounds more like fun. Who knew Katey Segal could actually sing - if you didn't know this was a celebrity project you'd maybe even buy into this version of "Have Yourself a Merry Little Christmas."

We know Marie Osmond is a singer but until I heard this traditional rendering of "O Holy Night" I might have wondered who would really ever want to hear her sing. "Santa Baby" is another song that no one ever need do again, but if anyone could get away with it, it would be Wendy Malick's Nina Van Horn character from Just Shoot Me. Jane French is apparently another actual singer, connected to NBC by virtue of her singing the theme song to one of their shows; her version of "The First Noel" is worth hearing again. Alex Kingston turns in a beautiful "Coventry Carol" complete with haunting sax by Everette Harp. Megan Mullally even pulls off a credible "Silent Night," no easy task.

So that's the good stuff, already wildly exceeding all expectations. Anthony Ruivivar and Jane Leeves can both keep their day jobs with the acting thing; their songs however are at least redeemed somewhat by the excellent backing musicians. There are way fewer embarassments overall than you would have thought, with only two really cringe-worthy tracks. Three characters from The West Wing singing Paul McCartney's sappy "Wonderful Christmastime" seriously falls into the joke category, although fans of the show might treasure this moment of whimsey from these folks. Which brings me to the one and only real atrocity committed in the name of Christmas on this disc, and that is Jay Leno's smarmy spoken word recitation of "'Twas the Night Before Christmas." I assure you you've never heard such phony intonation and fake emotion as Jay bestows on this Christmas classic. For someone who's achieved greater career success than most mortal men using little more than his voice, I would expect something better from Jay; this is cringe factor nine.