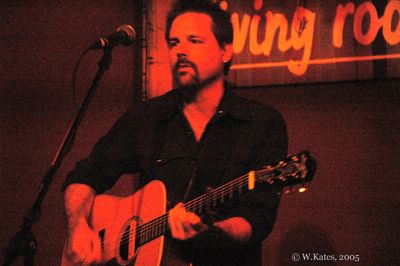 It's always great to check out new music, in this case it was Jon Randall, performing at the Living Room, courtesy of Dave and Sony/BMG. Randall is a talented singer-songwriter of the country persuasion, and Walking Among the Living

his Epic Records debut due out on September 20th is his fourth album and he's got something of an interesting history.

A native of Texas, by age twenty he had found work playing guitar with Emmylou Harris' band, the Nash Ramblers, a gig which ultimately won him a Grammy for their At the Ryman live album, released in 1992. His solo debut, What You Don't Know followed in 1995 on RCA; seeing him now, the long hair on the cover of that first album looks a little humorous. 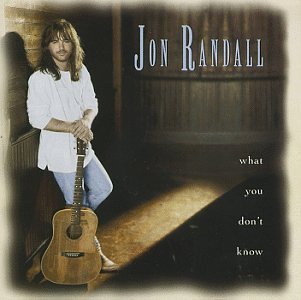 His second album, Cold Coffee Morning, initially delayed by a label shakeup at Asylum, ultimately came out in 1998 and included duets with Willie Nelson and Lorrie Morgan (who he was married to at the time). His third effort, Willin' was released in 1999 on the Eminent label.

In addition to his experience in Emmylou Harris' band, he's worked with Trisha Yearwood, Lee Ann Womack, Patty Loveless, Susan Werner, Lyle Lovett, and Bill Anderson, and he's toured in support of Vince Gill and the Dixie Chicks. Current squeeze and labelmate Jessi Alexander did not appear to sing backup this night, but Randall brought an excellent band to play with him consisting of a bassist and an acoustic lead guitarist.

His set was most enjoyable, at times bringing to mind Lyle Lovett and occasionally Jesse Winchester, but most of the set reminded me of Vince Gill, who he not only sounds like vocally, including some nice falsetto, but his guitar work and even his appearance bears something of a resemblance to country's premier singer-songwriter. He'll be opening for Vince Gill all this fall on a major tour, so if you're so inclined you can see a direct comparison.

His material was all pretty interesting, but I remember thinking that his song about cheating seemed maybe a bit too remorseful (although he might be ahead of the curve on this occasionally disturbing new trend in country), and the thought occurred during it that he would sound great covering the old Billy Paul classic, "Me and Mrs. Jones" (just a thought). While the Living Room is not a place where you would expect to find a major label country artist, it's great to be able to see someone like Randall in such an intimate and informal setting, and I'm looking forward to checking out Walking Among the Living when it comes out.