Battlestar Galactica Season 3.0 - It's All True 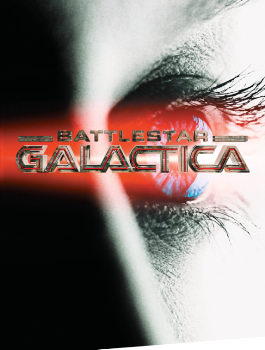 From director Kevin Smith on last week's Ebert & Roeper to Ken Tucker in the latest Entetainment Weekly, the reviews are unanimous that the current Battlestar Galactica television series is the best written, most intense drama series currently (or maybe ever) on network television. Season three debuts tonight on the SciFi Channel and is not to be missed. 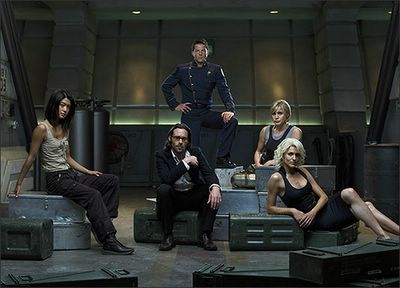 When it comes to science fiction, I'm an agnostic: I have no use for everything from Star Trek to Stargate, and prefer to ponder the stuff, if at all, in print form (yay, Tom Disch; boo, Harlan Ellison). Nevertheless, Battlestar Galactica gets to me as much as any serialized drama on the air. There are no actors in stupid alien makeup, no cornball comic-relief characters. The worst the series gets, as far as mumbo-jumbo sci-fi lingo goes, is that the people in this outer-space future constantly say ''frak'' instead of the F-word.

Galactica has a conceptual hook that pays off as adventure, as theory, and as metaphor. It goes like this: The remaining humans from the bombed Twelve Colonies are in perennial search of a new homeland and in perpetual battle against the Cylons — man-made machines gone evil on us, some of whom look human. The actual humans are led by a brave spaceship admiral (Edward James Olmos) and, by her example as a moral deep thinker, a teacher-turned-government leader-turned-teacher again (Mary McDonnell). The Cylon enemies include sexies like platinum blond Number Six (shoulder-bladey Tricia Helfer), who's turned one human — the show's current president of the Twelve Colonies — Gaius Baltar (frowny Brit James Callis), into a pathetic, quivering jelly of a man. (I suppose one has to say, this being science fiction: not literal jelly.) Baltar is a stand-in for the fanboys tuning in: If you diagrammed his skull you'd see three sections — rationality, guile, and ummm, pretty girrrrlll!

This season centers on attempts by Olmos' rusty space cadets to rescue McDonnell's enslaved-by-Cylons refugees from a barren patch of space rock that (barely) supports human life. McDonnell and the supporting players we've come to know are now either tortured husks, conflicted collaborators, or seething revolutionaries. That's where Battlestar Galactica is most sci-fi-like: It presents life as a miserable dystopia (see: everything from Orwell's 1984 to Blade Runner) filled with people seeking to create a utopia (hopefully, on the fabled Earth). The best villain is a religious-hypocrite Cylon played by Dean Stockwell, channeling his Blue Velvet-era venality. The best hero is Galactica spaceship pilot Sharon (Grace Park), a Cylon who turned her (glowing red) back on her fellow ''skinjobs.'' For viewers seeking contemporary metaphors, there are suicide bombers, talk of ''the insurgency,'' and feisty debates about warfare strategy. Any show that can accommodate decadent cruelty, tragic bravery, and political divisiveness is one you ought to be watching, frakkin' spaceships or not. Grade: A- 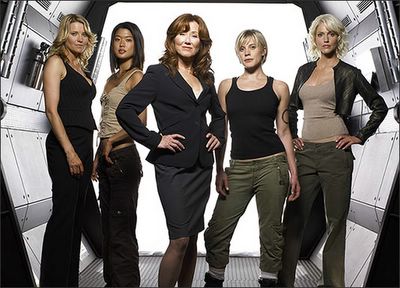 If you're new to Battlestar Galactica, many great viewing pleasures await you on DVD. Start with the miniseries in which the original lame series from the 1970's (originally something of a cheesy Star Wars knockoff) was "reimagined" into compelling drama. Seasons one and two are also available, season two divided into two DVD sets, season 2.0 and season 2.5 reflecting the manner in which the original shows are broadcast on the SciFi Channel. 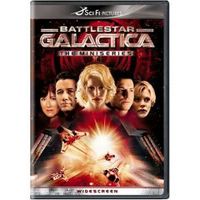 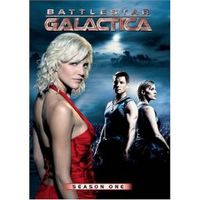 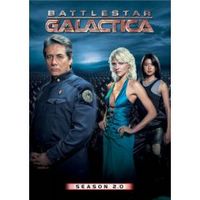 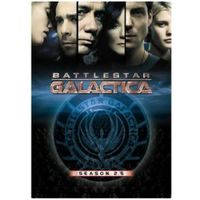