First big thanks to Dave who happened to catch Chiara Civello at the Living Room recently and was so knocked out he insisted that I come check her out at the next opportunity. Chiara is Italian, originally from Rome and now based in New York. She's a gifted singer songwriter whose style is varied with significant leanings toward jazz and Brazilian jazz/pop. She's got a beautiful voice, great songs, and an excellent band; it seemed like a rare privilege to be able to hear such a quality performance in such a small and intimate venue as The Living Room. I'd have to say that I was easily as knocked out as Dave was. Chiara writes the majority of her songs, even got to co-write a song with Burt Bacharach for her record which also features two covers, one of an excellent Rosa Passos tune and the other, the now classic-sounding "Caramel" by Suzanne Vega. After graduating Berklee College of Music, she landed in New York and was discovered by Russ Titelman who produced a demo and got her signed to Verve where her first album Last Quarter Moon

was released in 2005. Though an excellent record, sales did not meet Verve's expectations and as I understand it she is working on a second album and is now a free agent, label-wise. If you've not yet had the pleasure of hearing Chiara Civello, click on over to her myspace and check out the tunes on the player. All photos © W.Kates, 2006. 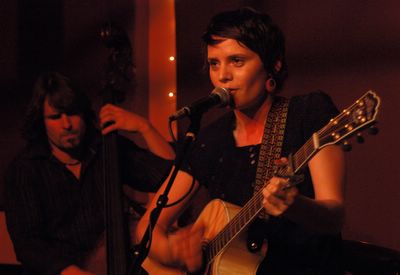 One of the cool things about the Living Room with it's hourlong set slots is that it affords the opportunity to check out other artists performing before and after the set you may have come for. In tonight's case, we heard a thoroughly enjoyable set by New York singer songwriter Julia Darling. 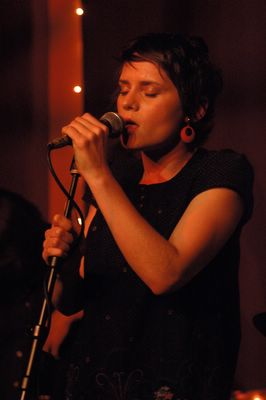 Originally from New Zealand, Julia has been a dancer, a poet, and a street musician and now regularly plays New York clubs like The Living Room. Her songs are interesting and she is a dynamic performer, easily winning over folks who are seeing her for the first time. 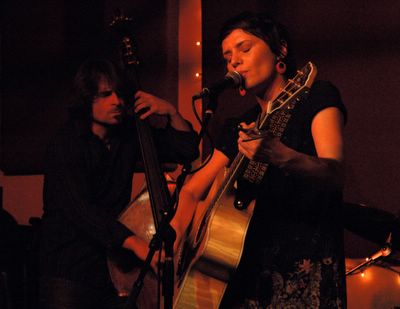 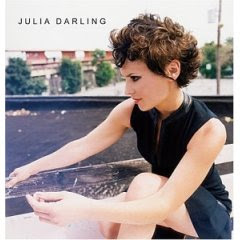