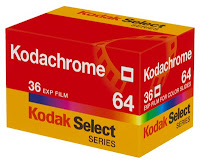 The Eastman Kodak Company declared bankruptcy this week marking a sad chapter to their 100+ year history of providing photographic equipment, supplies, and services to the world. You didn't have to be a photographer to feel a trace of sadness at the news on Thursday. If you grew up before there were digital cameras, you most certainly have used either a Kodak camera, film, processing, or more likely, all three.

In my life before digital, I shot only color slides. Kodachrome 64 was my film of choice. Kodak developed my slides and I looked at them on a Kodak Carousel slide projector that I bought with money I earned one winter shoveling snow in the neighborhood when I was about twelve.

Paul Simon captured very well the love that photographers had for Kodachrome in this song from his 1973 album, There Goes Rhymin' Simon. They weren't making videos in 1973, but there are a plethora of homemade videos on YouTube, of which this one is the best.

In 1986, Cyndi Lauper had a number one hit with "True Colors", the title track to her second album. She also got a Grammy nomination for Best Pop Vocal Performance. It didn't take long for the song to be licensed to Kodak for use in television commercials that ran all through the late 80s, and forever linked this song with Kodak.

For a bonus video this week, here is one of those Kodak commercials.

Charlie Ricci said…
For your readers who are sad about the demise of film here is an article about the last roll of Kodachrome ever made. You can find it here.
1/21/2012