The Rolling Stones - Havana Moon, The Stones Rock Cuba on 3/25/2016; With Their Career In It's Sixth Decade, The Rolling Stones Truly Take A Licking And Keep On Ticking; Still The World's Greatest Rock & Roll Band 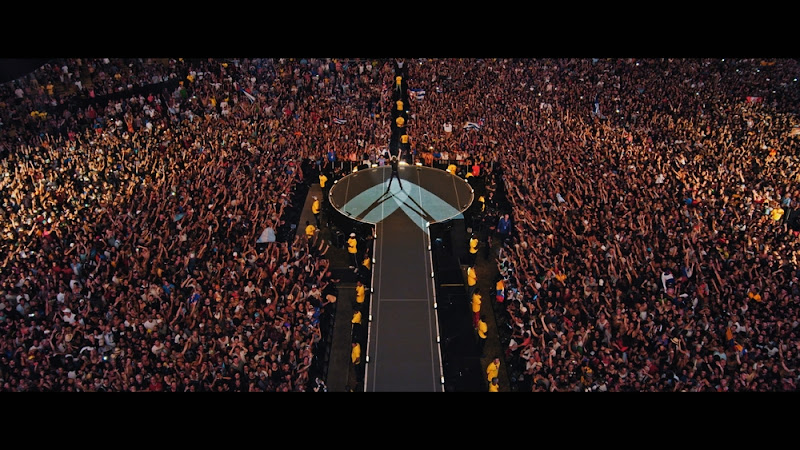 The Rolling Stones played a free concert in Havana, Cuba on March 25, 2016, capping off an historic week in which the thawing of relations between Cuba and the United States was celebrated with an official visit by President Barack Obama. The concert had it all: history for one thing, Cuba had never seen a rock concert on the scale of this magnitude. The concert had a huge audience; estimates varied but it's a safe bet that the Stones played to several hundred thousand people. The Rolling Stones are never short on drama, but this one had drama to the max. The one thing this concert had that may be surprising is that the Stones, despite their advanced ages, gave a superb performance, much more about that below. 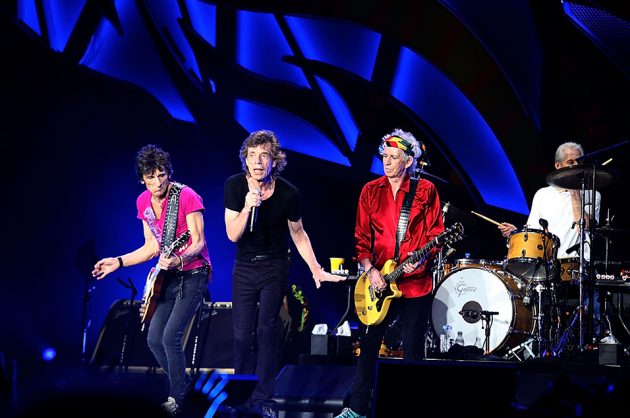 First, about the event:


“Finally, the times are changing,” proclaimed Mick Jagger to a vast, euphoric crowd in Havana on Friday night, as the Rolling Stones completed their Latin American tour with a concert that may well prove a pivotal moment for a generation of Cubans.

Hundreds of thousands thronged to the Ciudad Deportiva stadium to see the British rockers, who follow hard on the heels of a visit by Barack Obama, in a week that few on this island are ever likely to forget.

Amid growing hopes of reform and further opening, the Stones frontman emphasised how far the country has already come in cultural opening from the 1960s, when their songs were considered ideologically divergent.

“We know that years ago, it was difficult to listen to our music in Cuba, but now here we are in your beautiful land,” Jagger said in Spanish. “I think that, finally, the times are changing. That’s true, no?” The crowd roared their agreement.

It was the closest to an overt political statement in the two-hour concert, which some democracy activists feared would be used by the one-party state to perpetuate its hold on power.

The Stones – who long ago made the transition from youth rebels to rock aristocrats – avoided any hint of criticism of the current government of Raúl Castro. Instead, they largely let their music – and spectacular special effects – speak for themselves about the benefits of greater engagement. Their fans had still bigger expectations.

“This will be one of those weeks that people will use to measure other events. In the future, they’ll ask, was it before or after the Stones played,” predicted Tania Livia, a businesswoman attending the concert. “This is the biggest moment in my life,” said tattooed club owner Ferrer Castillo, who had travelled 200km by bus and taxi to see his heroes.

“For me, this is a historical moment on the same level as Nelson Mandela walking out of prison,” suggested Francoisse Fraissenet, a French woman who said she has seen at least 25 gigs by the Stones. Another fan from Brazil pushed her way to the front to ask: “Where do I get a concert T-shirt?”, but it wasn’t that kind of gig.

This was a free concert, rushed into being in just a few months. There were no seats, no refreshment kiosks and only a handful of rusty metal portable toilets. With no turnstiles, estimates of the crowd size were largely guesswork. Some said 200,000. Others more than half a million. All this observer can report is that it was dense, stretched in all directions as far as the eye could see, and was extremely good natured.

When it came to the staging, no expense was spared. Even before the music started, the lighting and video displays were breathtaking. While many Cubans have to make do with small, old grainy televisions in their homes, here they were suddenly in a field staring up at giant high-definition screens.

Considering the paucity of time that the team had to unpack the 85 container loads of equipment, set up the stage and erect the lighting rigs and screen towers, there were remarkably few glitches. Jonathan Watts for The Guardian, in Havana, Cuba, Saturday 26 March 2016.

Note: The above is an excerpt, the complete article appears in the booklet to the concert CD/DVD/BRD, The Rolling Stones: Havana Moon.. 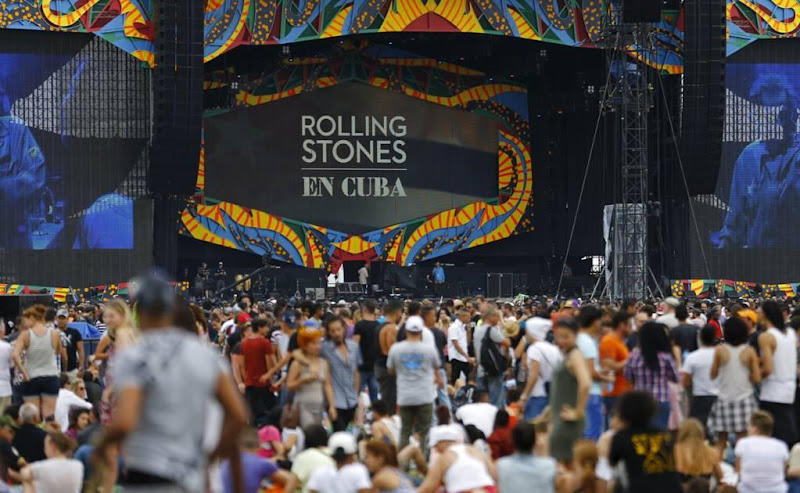 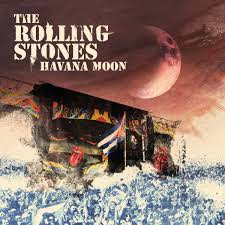 For the record, when the Rolling Stones took the stage at Ciudad Deportiva stadium on March 25, 2016, Mick Jagger and Keith Richards were both 72, Charlie Watts 74, and Ronnie Wood 68. I am sure that when they were in their thirties, they never imagined themselves as rocking septuagenarians. So, then, it is a little bit amazing to report that Havana Moon is as good a live Stones record as they have ever done. Yes, I know that's a rash statement, but if you listen to any track in this tight two hour set you will hear a band playing like they mean it. Perhaps most incredibly, you will hear Jagger doing a vocal in which he doesn't sound any older than when the song was first recorded; it doesn't matter whether it's a rocker like the set opener "Jumpin' Jack Flash" or a sensitive ballad like "Angie".

The band sound is very muscular and the mix is excellent. The guitar work by both Richards and Wood is phenomenal; you might think these two have played together before. Watts' drumming is always just what the song needs, so reliable. The Stones have said in interviews that they consider every concert to be an opportunity to continually get better, to outdo everything they've done before. This might sound like hyperbole, but I would say that the evidence is right there in the proverbial grooves.

Those are the primary members. The support musicians have been with them a long time and they excel as well, especially Chuck Leavell on piano; he also serves as the band's musical director. They have Darryl Jones on bass and backing vocals, Karl Denson and Tom Ries play saxes (Ries doubles on keyboards), and Bernard Fowler and Sasha Allen handle vocals. At this point they play like a well oiled machine.

The setlist for this show could not have been better. For early singles they did "Satisfaction" and "Painted Black". There were the middle period rockers such as "Jumpin' Jack Flash", "Honky Tonk Women", and "Brown Sugar"; the explosive guitar work was most satisfying. From Exile On Main Street, Jagger ripped it up on "All Down the Line" and "Tumbling Dice". After "Honky Tonk Women", Jagger did all the band intros, speaking what sounds like fluid Spanish I might add. The intros are edited out of the CD except for the last one in which he introduces Keith Richards. Jagger then gave the spotlight to Richards, who took the lead vocal on the next two songs, a very bluesy "You Got the Silver" and a rousing "Before They Make Me Run".

There were later hits like "Miss You" and "Start Me Up", still sounding shiny and new. There were the concert staples from the Let It Bleed album, a fiery "Gimme Shelter" with nice vocals by Sasha Allen and a very long "Midnight Rambler". In the entire set, my only quibble would be that the call and response between Jagger and the crowd (at the peak of "Midnight Rambler") drained the song of its usual drama and danger in that moment. That's a small nitpick. Considering all the factors, I'm guessing that it added to the audience enjoyment.

They saved "You Can't Always Get What You Want" for the encore. Entrevoces, a Cuban choir, started the song beautifully, then the Stones played a version that was ridiculously good. Then they closed the night with "(I Can't Get No) Satisfaction". Jagger spoke to the audience in Spanish quite a bit. In about two hours of performance, The Rolling Stones made an excellent case for the continuation of their title of the world's greatest rock and roll band. I think there are several hundred thousand Cubans who would agree.

The setlist from the concert is shown below, courtesy of setlist.fm. Havana Moon offers the entire concert, in correct running order on two CDs, which is my ideal for a live album. The director of the film was quoted as saying that he wanted a program that could be broadcast on television throughout South and Central America. Apparently, for the purpose of time, five songs were omitted from the program, but those same songs are included on the DVD as bonus tracks. The package is also available with two CDs plus Blu-ray disc.

Havana Moon is the latest in a series of archival Stones concerts, which they have made available at very reasonable prices. There is a touch of irony in this because tickets to the Stones' regular concerts are so expensive. Still, the archival releases are to be applauded and encouraged. The street price for Havana Moon with DVD is about $21 or with Blu-ray disc $25. The DVD and Blu-ray disc have two sections that are not on the CDs. One is an introduction with shots of Havana, Cuba and the site of the concert, the set-up of the stage and speaker towers, etc. The other is an interlude of interviews with the band during which a performance of "Loving Cup" plays in the background; this song is not part of the live set.


There are three more tracks from Havana Moon available as videos: "It's Only Rock 'N' Roll (But I Like It)", "Paint It Black", and "Out of Control".


Watch Havana Moon, Behind the Scenes posted by Sergio Barone