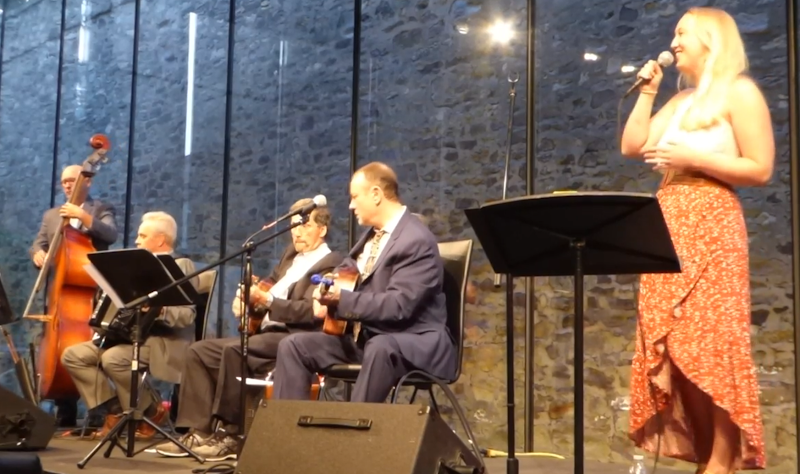 The Hot Club of Philadelphia performed at the James A. Michener Art Museum in Doylestown, PA on August 15th. There are numerous Hot Club bands that take their inspiration from The Hot Club of France, which was formed in the 1930s by Django Reinhardt (guitar) and Stéphane Grappelli (violin).

About Django Reinhardt and The Hot Club of France:


Django Reinhardt has astounded and thrilled numerous generations of guitar players and jazz lovers with his amazing command of the guitar. January 24th, 1910 at Liberchies Belgium, Django was born into the open air, rambling lifestyle of his gypsy parents. At the age of eight, his mother's tribe settled near the belt of fortifications that surrounded the old Paris, near the Choisy gate. He never wore a suit or lived in a real house until he was twenty years old. These French Gypsies or Manouches were a world unto themselves, medieval in their beliefs, and distrustful of modern science. Django grew up in this world of contradictions, one foot in the bustling big city of Paris and the other in the age-old life of the nomadic gypsy. Though born into poverty Django had the soul of a nobleman and this natural elegance of bearing and attitude expressed itself in his music.

It was at an early age Django became attracted to music. When twelve years old he received his first instrument, a banjo/guitar that was given to him by a neighbor who had noticed his keen interest in music. He quickly learned to play, mimicking the fingerings of musicians he watched. He was soon astounding adults with his ability on the guitar, and before he was thirteen he began his musical career playing with popular accordionist Guerino at a dance hall on the Rue Monge. He went on to play with numerous other bands and musicians and made his first recordings with accordionist Jean Vaissade for the Ideal Company. Since Django could not read or write at the time "Jiango Renard" was how his name appeared on these records.

On November 2nd, 1928 an event took place that would forever change Django's life. At one o'clock in the morning the 18 year old Django returned from a night of playing music at a new club "La Java" to the caravan that was now the home of himself and his new wife. The caravan was filled with celluloid flowers his wife had made to sell at the market on the following day. Django upon hearing what he thought was a mouse among the flowers bent down with a candle to look. The wick from the candle fell into the highly flammable celluloid flowers and the caravan was almost instantly transformed into a raging inferno. Django wrapped himself in a blanket to shield him from the flames. Somehow he and his wife made it across the blazing room to safety outside, but his left hand, and his right side from knee to waist were badly burned.

Initially doctors wanted to amputate his leg but Django refused. He was moved to a nursing home where the care was so good his leg was saved. Django was bedridden for eighteen months. During this time he was given a guitar, and with great determination Django created a whole new fingering system built around the two fingers on his left hand that had full mobility. His fourth and fifth digits of the left hand were permanently curled towards the palm due to the tendons shrinking from the heat of the fire. He could use them on the first two strings of the guitar for chords and octaves but complete extension of these fingers was impossible. His soloing was all done with the index and middle fingers! Film clips of Django show his technique to be graceful and precise, almost defying belief.

Django was influenced by jazz recordings of Eddie Lang and Joe Venuti, Louis Armstrong and Duke Ellington. This new music found a place deep in Django's heart. It provided the perfect vehicle for his prodigious talent for improvisation. Django rarely if ever played a solo the same way twice. Numerous recordings prove this to be true. His creative genius was not only that of the master improviser, but also that of the composer, and he can be credited with numerous pieces with beautiful melodies and sophisticated, subtle harmonic structures. However, Django could not read or write musical notation and he was at the mercy of others that could to get his ideas down on paper.

1934 proved to be the most important year of his life. The Quintet of the Hot Club of France was born! As the fates would have it, the Quintet was formed by a chance meeting of Django and Stéphane Grappelli. A band of fourteen musicians including Django, Stéphane, Roger Chaput, and Louis Vola were commissioned to play at the Hotel Cambridge at teatime. During intermission Django would find a corner backstage and play his guitar. One day Stéphane joined in and both were so pleased with the exchange they went on to play together more and more frequently joined by Roger Chaput (guitar), Louis Vola (bass), and eventually Django's brother Joseph (guitar). A small record company Ultraphone recorded their first sides Dinah, Tiger Rag, Oh Lady be Good, and I Saw Stars. These first records caused a sensation! The Quintet went on to record hundreds of sides and had a following on both sides of the ocean.

1939 found the Quintet touring in England when the war broke out. Django returned to Paris while Stéphane remained in England. Django played and recorded throughout the war years substituting Hubert Rostaing's clarinet for Stephen's violin. He somehow avoided the fate of many of his kinfolk who went to their deaths in the Nazi concentration camps. After the war he was rejoined by Stéphane and they again played and recorded. He toured briefly with Duke Ellington in America and returned to Paris where he continued his career until 1951 when he retired to the small village of Samois sur Seine.

On May 16th 1953 Django suffered a massive brain hemorrhage and died, leaving behind his wife Sophie and son Babik. His music remains as vital and exciting today as it was when he lived, a legacy of joy to all future generations that rediscover the genius of the Belgian gypsy Django Reinhardt. [Joseph Dinkins, Red Hot Jazz Archive] 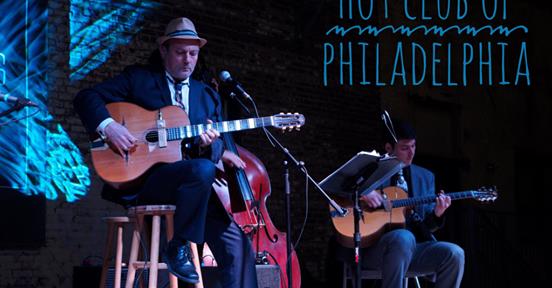 Wahrhaftig hosted the show in addition to providing acoustic gypsy guitar and vocals. He introduced the songs, sometimes telling stories and providing background on the material. From the first song, the standard "Exactly Like You", it was remarkable the degree to which they sounded like the recordings I've heard of Reinhardt with the original Hot Club. The second selection, "Blue Drag", is one that was written by Josef Myrow. The first two were also instrumentals.

Wahrhaftig took the lead vocal on "September Song", his voice is well suited for this style of music. "Bistro Fada" came with a very interesting story. When Woody Allen was filming his 2011 movie Midnight in Paris, he called Stephane Wrembel for a song, saying, according to Wahrhaftig, "I need it by tonight." Wrembel then wrote it, recorded it, and provided the finished product to Allen as requested. The resulting composition, "Bistro Fada", may be the tune I enjoyed the most that night. I also think it comes very close to capturing the spirit of Reinhardt and the original Hot Club at their best.

Meg Rozinski came out to sing lead on the gorgeous "The Bluest Kind of Blues", another Reinhardt composition. Next up was the Gershwins' "Someone to Watch Over Me". Rosinski sounded great on both the first half, which was all her, and on the last half, which featured a vocal duet with Warhrhaftig.

Wahrhaftig explained that, "'La foule' began life as a Peruvian waltz. Edith Piaf heard it on a tour of South America and loved it so much she had French lyrics written for it." Then they played it and even in a foreign language it was a very memorable tune.

After a break, during which Wahrhaftig sold CDs and conversed with anyone who walked up to the table, the band retook the stage for their second set. First up was another French number, Jardin d'hiver" [Winter Garden], a song that will be on their next album, their third, now in the works according to Wahrhaftig. That was followed by "Joseph Joseph" a classic klezmer tune.

"How's the World Treating You" was introduced as a Louvin Brothers song, which has been done by many artists including Alison Krauss and James Taylor. The song was written by Chet Atkins and Boudleaux Bryant. Next up was the classic "People Get Ready" featuring Dave Hartl's accordion; his amazing solo sounded as if he were playing an organ. Although Curtis Mayfield and the Louvin Brothers are both pretty far removed from Django Reinhardt and Stéphane Grappelli, the Hot Club of Philadelphia has a penchant for doing more recent works in the gypsy jazz style. And they do it quite well.

The overriding concept of the original Hot Club of France was to perform American jazz as an acoustic band with no drums and no horns. The Hot Club of Philly ended their show with Cole Porter's "You'd Be So Nice To Come Home To". Their style of acoustic gypsy jazz is one I could listen to anytime, anywhere. They take acoustic music to another level. C'est magnifique.

Many thanks to the Michener Museum for the sound and lighting. Thanks also to Beverly Kates for the camera work and to Lindsey Mitchell for video production.

P.S. Although it was not mentioned in the Django Reinhardt history, I learned during the research for this article something I never knew about the Holocaust. In addition to the six million Jews that were killed, there were also one million European gypsies killed, according to several sources.