Eva Cassidy - Acoustic; Finally Released On CD, These 20 Tracks Reveal the Essence of Her Art

Photo courtesy of EvaCassidy.com
If you've listened to Eva Cassidy, you probably know the beautiful artistry that she brought to her music. In the nearly two decades since the world became aware of her career, that was tragically shortened by cancer, it seems like everything that she had recorded has been released. 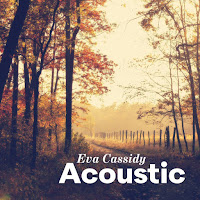 Acoustic is a twenty song collection of tunes that Cassidy recorded that consist for the most part of just voice and acoustic guitar. It was first released digitally in 2017. When I discovered it on Spotify then, I went looking for information about it and found none. Listening to it these last few years, I've been impressed with several things. These recordings pretty much represent the core of Cassidy's repertoire. Even though we may be used to hearing some of this material produced in different ways, the artistry and her singing style shines clearly on these tracks.
If I didn't know differently, this set sounds like it was all recorded in one afternoon. The mental picture that emerges is of her in a studio, alone, but for a producer and maybe a technician. The sound of this set suggests that it was all recorded as a piece. It might have been a demo reel or it might have been an album; in reality, it makes no difference.
The cause to celebrate is that the recording has been released on CD. With the CD we finally learn the source of these recordings. It turns out that eleven tracks were recorded by Chris Biondo in his Maryland  studio, something akin to what I had pictured. Eight tracks came from live recordings she'd made at Pearl's in Annapolis. One track was from Blues Alley. Most folks will be familiar with that venue from the live album that she made there.
One thing that makes this project hold together so well is that the material recorded at Pearl's and Blue's Alley has no trace of an audience. Not only is there no applause, but there is no extraneous sound during any of the songs. All twenty tracks seem to have a unified sound, as if they might have all been recorded together.
They did make one change since the original digital-only release. Possibly, anticipating that the use of "Time After Time" in a jewelry commercial over the 2020 holiday season might stimulate interest, Acoustic was resequenced to lead off with that track. I must also point out that leading with "Time After Time" may have been an artistic decision. It just doesn't get better than hearing Cassidy sing this modern standard.
Ultimately, it doesn't matter that this album was recorded at three different places. It also doesn't matter that two of the tracks include other musicians. And, whether or not these recordings have been released before, it is a huge accomplishment to collect them all on one album. What's most important is that we have this gorgeous legacy that Cassidy left us.
Many thanks to Chris Biondo for making this project a reality. This wonderful record should be at the center of any Eva Cassidy collection.
Watch "Time After Time" live at Blues Alley, Washington D.C.
Recorded by Bryan McCulley on 3 January 1996.
Songlist:
1. Time After Time
2. Wayfaring Stranger
3. Early Morning Rain
4. At Last
5. Wade In The Water
6. Dark Eyed Molly
7. Songbird
8. Bold Young Farmer
9. Tennessee Waltz
10. It Doesn't Matter Anymore
11. People Get Ready
12. The Water Is Wide
13. Kathy's Song
14. True Colors
15. You Take My Breath Away
16. American Tune
17. I Wandered By A Brookside
18. Autumn Leaves
19. Who Knows Where The Time Goes
20. Danny Boy