Svetlana and the Delancey Five - Night at the Speakeasy; Stunning Debut From One of New York's Finest Swing Bands Is, In a Word, Delightful 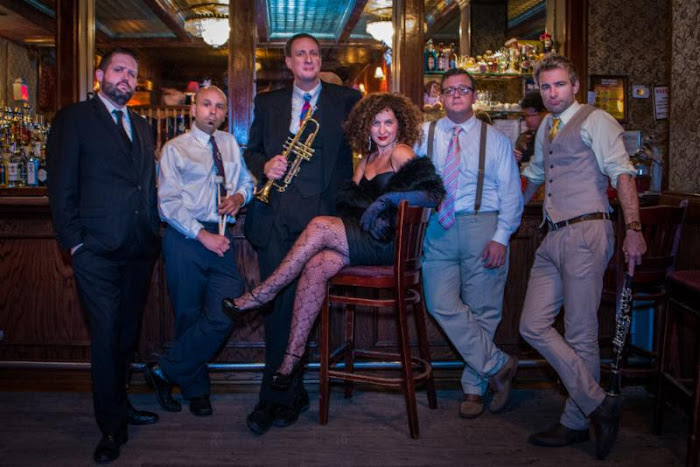 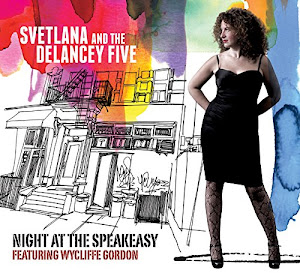 It is a rare and wonderful thing when an album contains excellent versions of familiar songs side by side with new original songs that sound as good as, if not better than, the classics. Night at the Speakeasy, the stunning debut from Svetlana and the Delancey Five, is just such an album. Treat yourself to the opening track, "All I Want", then we will resume below in about 3 minutes and 44 seconds.


Svetlana and the Delancey Five - "All I Want"

Everything you need to know about Svetlana and the Delancey Five is right there in this song. Start with Svetlana Shmulyian the Russian born front woman, vocalist, and songwriter. I love the vocals, I love her clear and sweet tone as well as her delivery. The level of musicianship in the Delancey Five is extraordinary. There is the sure and steady rhythm of bassist George Delancey and drummer Rob Garcia. The other instruments each answer every vocal line before a succession of sweet solos. There's Dalton Ridenhour on piano, Adrian Cunningham on woodwinds, specifically clarinet on this song, Charlie Caranicas on trumpet, Vinny Raniolo on guitar and special guest Wycliffe Gordon on trombone. Gordon also contributes vocals and arrangements on certain tracks. "All I Want" was written by Svetlana showing that she has a true gift for melody as well as lyrics. Svetlana also penned one other original song, "It's All Good (Big Noise)" and she wrote an additional verse for "You Won't Be Satisfied".

The other original composition on this album is "Dance Inbetween the Moments", written by drummer Rob Garcia. This uptempo number directs you to "take the F train to Delancey and dance...". It also has a nice clarinet solo; Cunningham amazes me with his seemingly effortless performance.

"You Won't Be Satisfied" is one of two tunes on this album that Louie Armstrong once sang with Ella Fitzgerald. The other is "Under A Blanket Of Blue". Svetlana's duet partner on these songs is Wycliffe Gordon; Gordon's vocals are outstanding, he sounds something like a modern day Louie Armstrong. These tracks are a highlight of Night at the Speakeasy and "Under A Blanket Of Blue" is rapidly becoming my favorite song.

The diverse song selection is just another of the joys of this album. Night at the Speakeasy was produced by Guy Eckstine. The Grammy Award winning producer did an amazing job on this record; it's a home run on every level. Watch the EPK below.

Talking about the project, Eckstine said, "I had a blast making it. Svet reached out to me via Facebook. I went to see her live show at Backroom Speakeasy and I was sold. I thought she had a great voice that I could really work with in the studio, and her band was top notch. The addition of Wycliffe just sealed the deal."

Talking about the sessions and working with Svetlana, Eckstine said, "She had arrangement ideas solidified with Wycliffe and drummer, Rob Garcia. She had more than enough songs to record, so I helped her whittle down the repertoire. The band recorded a few takes of each song and picked out the best version and then really worked her hard on the vocal sessions. I think that is where I contributed most...and then attending the mixing session too. She is very open, warm and is not afraid to go for it in the studio... It's a swing record with some new standards thrown in too, and encompasses a few different eras from tin pan alley, be bop era and pop music. I hope she wants to work with me again as I had a great time!"

About Svetlana, Eckstine added "I just love her tone and spirit. She is unafraid and in a sense her naiveté is what adds that special something that is intangible and innocent." Many thanks to Guy Eckstine for his comments.

Showing their versatility, Svetlana and the Delancey Five take on standards of swing and jazz alike, such as the Gershwins' Broadway show classic "Lady Be Good". They swing out on two Duke Ellington standards, "Just a Sittin' and a Rockin'" and "Do Nothing Till You Hear From Me." I've heard "Do Nothing Till You Hear From Me" (seems like) a million times, but never before noticed the all important line that follows, "and baby you never will". 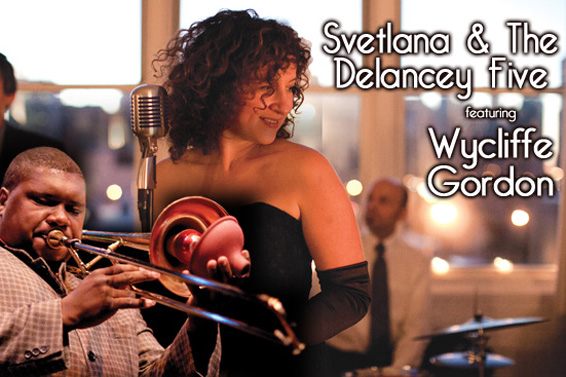 I like that this set includes two modern standards. The Beach Boys' "God Only Knows" lends itself to a jazz interpretation pretty well. The Brian Wilson composition would seem to resist any urge to swing, but the Delancey Five gives it just the right amount of nudge in that direction. Beatles purists might cringe when they hear "Because" done in a 1930's cabaret style, but there's no denying the beauty of the composition or the imaginative interpretation so elegantly executed. Trombonist Gordon has mastered the art of using the muting bell on the business end of his horn to give the music a wah-wah effect which provides the retro cabaret flavor. This song sounds like it could just as easily be the soundtrack of a classic 1930s Warner-Brothers cartoon.

In the liner notes, Will Friedwald writes: "My personal favorite song on the album is a rare vintage tune 'You Are Like A Song' by the legendary Russian German trumpeter and composer Eddie Rosner (known as 'the Soviet Satchmo'). Svetlana sings in the original Russian of which I don't speak a word, but the warmth and sweetness in her voice makes me holler 'Da!'"

This is smile inducing music and it seems likely that the players are smiling too. If I had one word to describe the music on this album, it would be delightful. And nowhere is this more so than on the two jazz standards that close the album. These are both compositions by Vincent Youmans and Irving Caesar. "Sometimes I'm Happy (Sometimes I'm Blue)":

Sometimes I love you, sometimes I hate you
But when I hate you it's 'cause I love you
That's how I am, so what can I do?
I'm happy when I'm with you
The final track is "Tea For Two" from the 1925 musical No, No, Nanette. It doesn't get any more delightful than those two tracks. 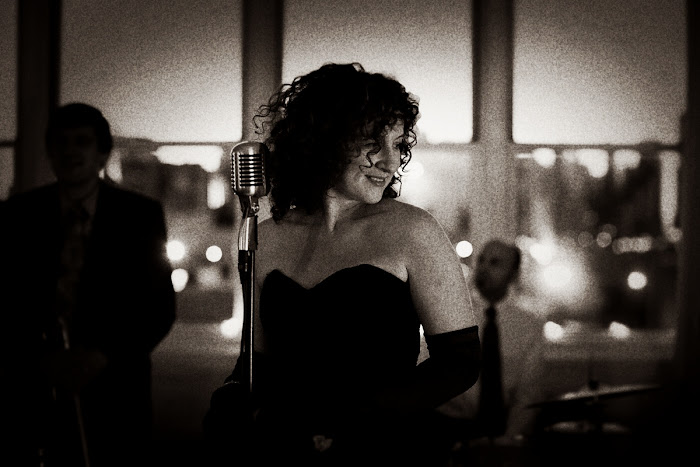 In the EPK, Svetlana says, "People just connect to this music even if they don't like jazz. You know, they just connect to the happy feeling and to the groove and to the soul and so I think that's what makes this music universal." That's so true. I believe that this album has the potential to tap into a huge audience that doesn't listen to jazz or buy records. In 2002 Norah Jones did exactly that with her debut album Come Away with Me; the most common reaction to that album was "I didn't know they made records like this anymore." I think that Night at the Speakeasy has the goods to both have a hit single with "All I Want" and win lots of Grammy's as Norah did.

Svetlana has a very unique back story. "It's an interesting culmination of the story of a Russian girl who grew up singing, studying piano and classical vocal, singing in traditional Russian choirs - but, at insistence of her family of engineers, studied a more practical subject of mathematics.

It's not an immigrant story that begins in hardship, however. 'I had a fabulous, happy childhood in the dark concrete buildings of Moscow,' Svetlana recalls. 'I have a great family and I guess that's where it starts and ends - it doesn't matter where you are or how long you have to stand in line to get bread and butter. I come from a family of nerds and engineers and the reality of becoming a full-time artist seemed really far-fetched, but in my heart of hearts I always knew I was an artist'" (from their press release). If you'd like to read more, Svetlana did an excellent and very thorough interview with Danielle Miceli of New York Cabaret Today.

Svetlana formed the Delancey Five about four years ago on New York's Lower East Side. They have played numerous New York venues such as B. B. King's and The Blue Note, but their home is a place called The Back Room located just off Delancey Street behind Rattner's Deli. It is an authentic speakeasy that is accessed using a secret passageway and a password (provided on their Facebook page) is required for entry. Svetlana and her band play there every Monday night. This speakeasy, which has been in continuous operation since Prohibition, is said to have been a hangout for historical mob figures like Meyer Lansky and Lucky Luciano. Click here to watch an excellent five minute feature from The Travel Channel showing the Back Room and including Svetlana.

This is a terrific record, and I can't get enough. I'm already ready for them to record another. If I could get into NYC easier, I surely would be a regular at the Back Room on Monday nights. 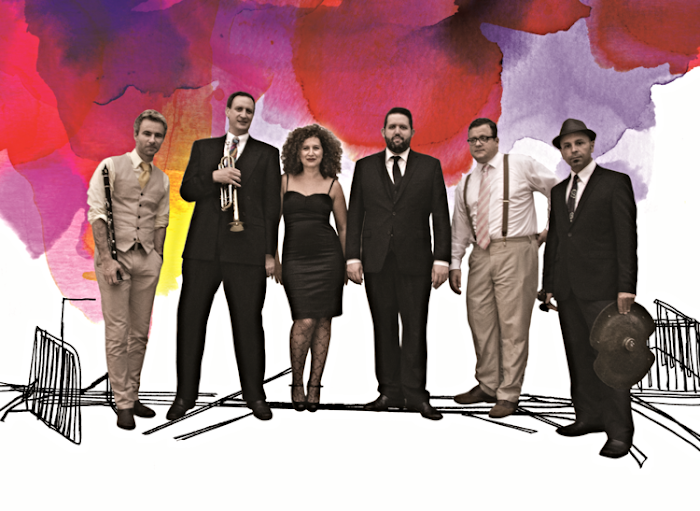 Photos courtesy of Svetlana and the Delancey Five

01/22/2016 Update: The CD release show by Svetlana and the Delancey Five on January 15th at B.B. King's in NYC was sold out. Way to go Svetlana. Wycliffe Gordon has quite a catalogue of albums and I've been listening to them on Spotify. There is a lot of good listening here and it may be the subject of a future article.