Dion - New York Is My Home; Yes, That Dion Has Made A First Rate Rock Album, Still "Creative and Relevant" After All These Years 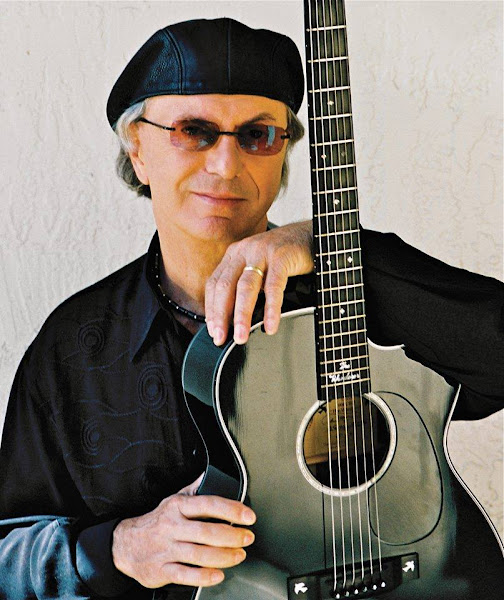 Dion. Dion DiMucci might not have been my first thought when I heard Mike Marone play a killer track the other day on his Loft morning show on Sirius XM. The song was "Aces Up Your Sleeve", and though I didn't recognize the singer, the guitar work made my hair stand on end. It sounded like early Mark Knopfler circa the first two Dire Straits albums, think "Sultans of Swing". I missed the intro so I jumped onto the Loft's Facebook page and posted a request to know who it was. The answer came back shortly from Mike; it was Dion from his brand new album, New York Is My Home, released February 12th.

Dion is fronting this explosive, well-produced rock band with superb guitar work and a brand of rock that sounds timeless. Timeless is how we must also describe the singer. This album is so good, and Dion is so at home with the material, that you would never ever know that this is a singer who is now in the sixth decade of his career and that he can even now, at age 76, restore our faith in the redemptive power of rock and roll. Bruce Springsteen, a guy who knows a little bit about the redemptive power of rock and roll himself, said of Dion, "All hail Dion, the real link between Frank Sinatra and rock n roll."

There's a very good reason why Dion sounds so at home with this material and that is because he wrote or co-wrote most of it. New York Is My Home also features a duet with Paul Simon on the title track, a song written by Dion to showcase the love of NYC that these two musical titans share.

Dion told the Morning Call newspaper, "It’s the best album I’ve ever done. I feel more relevant today than I did back when I recorded ‘Runaround Sue.’ Unbelievable – it’s like I’m having a ball."

Another reason why Dion sounds so comfortable singing these songs is that his last two albums were blues albums. Although New York Is My Home leans a little more toward rock, the blues is always there and Dion's voice reminds me of Robert Cray especially on the two blues covers, Lightnin' Hopkins' "Katie Mae" and Tampa Red's "I Ain't For It".

For the record, Dion started his career in the 1950s, hitting his stride in the early 60s with "The Wanderer" and "Runaround Sue". He peaked again in the late 60s with "Abraham, Martin, and John" an indelible song that has been with us ever since. Dion's career has continued through the decades. I last caught up with him in 2000 when he released the excellent Deja Nu, which contained two Bruce Springsteen covers, including a very cool Doo-wop version of "If I Should Fall Behind", and yes, you read that right, a very cool Doo-wop version.

Watch the official video for "New York Is My Home" by Dion and Paul Simon. 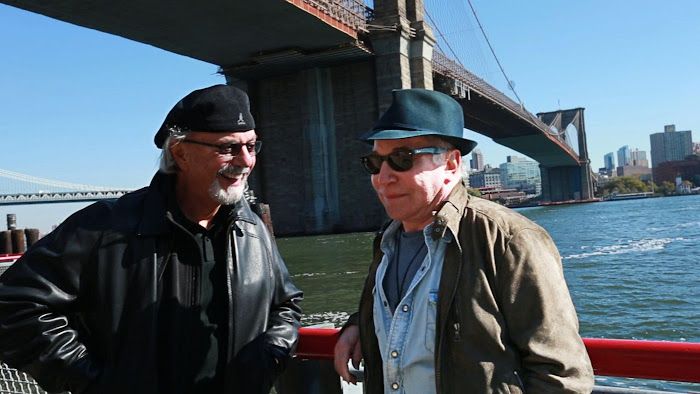 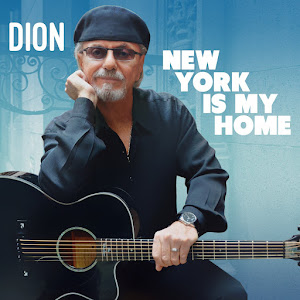 Tracklist:
1 Aces up Your Sleeve
2 Can't Go Back to Memphis
3 New York Is My Home
4 Apollo King
5 Katie Mae (Lightnin' Hopkins)
6 I'm Your Gangster Of Love
7 Ride With You
8 I'm All Rocked Up
9 Visionary Heart
10 I Ain't For It (Tampa Red/Hudson Whittaker) 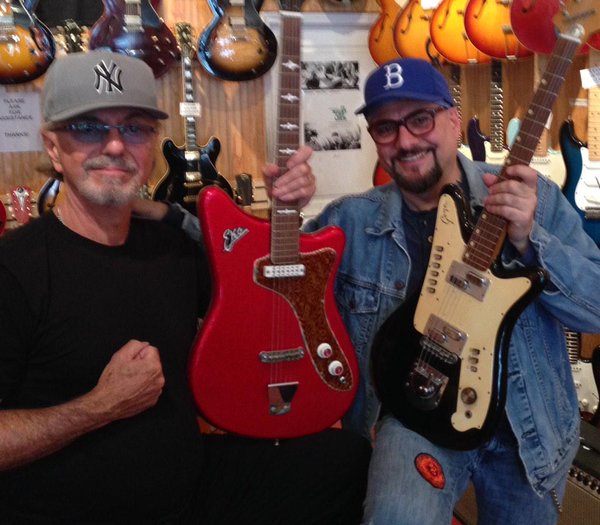 Photo courtesy of Jimmy Vivino : "Me & Dion @RivingtonGuitar #NYC
Finally wkin on the record we threatened to make 28 years ago... Takin' our time!"

Check out New York Is My Home (the track list above is linked to the music). How did Dion come to find this amazing band? The fact that New York Is My Home was produced by Jimmy Vivino may tell you all you need to know. Vivino's prodigious skills have been on display on TV for many years as a musician and more recently bandleader for Conan O'Brien's TBS show, Conan.

Here is the complete text of what Dion told John J. Moser of The Morning Call, July 9, 2015:


“...And I just finished a new album with Jimmy Vivino and the Black Italians. It’s coming out in a couple of months. It’s the best album I’ve ever done. I feel more relevant today than I did back when I recorded ‘Runaround Sue.’ Unbelievable – it’s like I’m having a ball.

That band is within the Conan O’Brian Band. So they’re, like, blues guys. And we did a rock/blues album, with a couple of other things in there. I did a duet with Paul Simon on one thing. It’s about New York – it’s just so good. I love it.”

I’ve seen Jimmy play around here. He plays with The Fab Faux, The Beatles tribute …

“Yeah, The Fab Faux. Yeah, he’s a connoisseur. That guy’s like a historian. But he’s really a blues artist. When it comes down to it, he could play with … I mean, he’s in Fab Faux but of course he’s a blues historian. But his natural [state] is like me – he’s very much into blues.”

Is there any new music on the new album? Anything you wrote?

"Oh, it’s all new. On the new album it’s all new. Except one Lightning Hopkins song. But it’s basically all songs I wrote. Crazy good. Like I said, I feel more creative and relevant today than I did back then. It’s crazy. [Rock journalist] Dave Marsh, he told me, he said, ‘You’re the only guy from the ‘50s who stayed creative.’ I started arguing with him. He said, ‘Prove me wrong.’ And I couldn’t prove him wrong.”

Bonus Video #2: Last night Dion and Vivino also performed "I'm Your Gangster of Love" for the web extra on teamcoco.com. 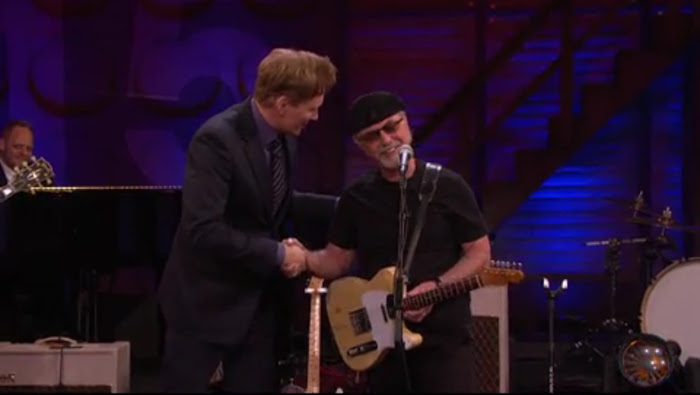