Revisiting Watergate With The Films All The President's Men (1976) & Dick (1999), Plus A New Watergate Revelation 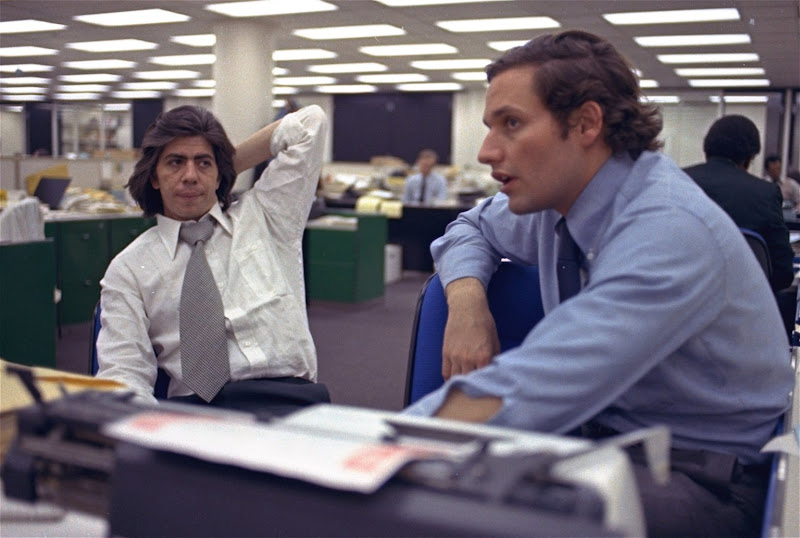 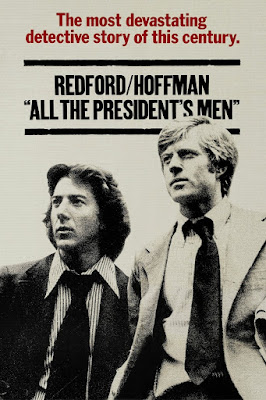 All the President's Men (1976), directed by Alan J. Pakula
The Watergate era ended on August 9, 1974 when Richard Nixon resigned the presidency and left the White House in disgrace. Before the year was out, Washington Post reporters Bob Woodward and Carl Bernstein published a book about how they investigated and broke the story of the Watergate scandal and cover-up. Two years later, the book became a major motion picture with Robert Redford and Dustin Hoffman starring as Woodward and Bernstein. The movie was nominated for eight Academy Awards including Best Picture and Best Director. Jason Robards won the Oscar for Best Supporting Actor for his portrayal of Executive Editor, Ben Bradlee.

All the President's Men is a gripping detective story, and even though it covers plenty of territory regarding the burglary and cover-up, you still find yourself wondering as the movie nears its conclusion, if they are going to get it all in within the 138 minute running time. The movie is satisfying on every level, and viewing it now in 2016 their technology looks kind of quaint. The detective work is all leg work and phone calls, with no cell phones and no internet; the resulting stories were typed on typewriters and handed in to the editor.

Like most of America, I found the Watergate scandal to be completely riveting. I followed every detail both in the newspaper and on the evening news, which was presented on CBS by (Uncle) Walter Cronkite. Cronkite delivered each of Woodward and Bernstein's revelations from that day's Washington Post. We knew all about the arrest, the money, the connection to the Committee to Re-Elect the President; was there ever a better acronym than "CREEP"? We knew all the names including: G. Gordon Liddy, E. Howard Hunt, James McCord, Jeb Stuart Magruder, John Mitchell (Attorney General), Maurice Stans, H. R. "Bob" Haldeman, John Ehrlichman, and John Dean.

There was no better national theatre than when the Watergate Senate hearings were carried live on television in 1973. The Senate Select Committee to Investigate Campaign Practices was chaired by "Sam" Ervin, Jr.. Senator Sam was an old-fashioned, southern lawyer from North Carolina, born in 1896. In his obituary, the Washington Post described him: "With his arching eyebrows and flapping jowls that signaled his moral indignation at much of the testimony before his committee, his half-country, half-courtly demeanor and his predilection for making points by quoting the Bible and Shakespeare and telling folksy stories, Ervin quickly became a hero to many."

In addition to the national news, I devoured every issue of New Times Magazine, but my ultimate favorite read during Watergate were the pieces penned by Hunter S. Thompson. When each new issue of Rolling Stone hit my college mailbox, my world stopped until I read Thompson's latest screed. Such as, "Nixon will be remembered as a classic case of a smart man shitting in his own nest. But he also shit in our nests, and that was the crime that history will burn on his memory like a brand. By disgracing and degrading the Presidency of the United States, by fleeing the White House like a diseased cur, Richard Nixon broke the heart of the American Dream."

From the bungled burglary on June 17, 1972 to the interworkings of CREEP and "the plumbers", to the daily revelations such as the Nixon tapes, Nixon's secretary Rosemary Woods' "accidentally" erasing a key portion, to the Senate hearings, the midnight firings to the live coverage of Nixon's resignation and departure from the White House by helicopter, I gobbled up every morsel.

Watch the CBS News coverage of Nixon's departure from the White House (reported by Dan Rather).


A New Revelation: I thought I knew pretty much all there was to know about Watergate, but as I watched All The President's Men this time, I was positively floored by a detail that I had somehow missed in the past. On the surface, Watergate is the story of how a bungled burglary of the Democratic National Committee offices wound up bringing down a president. There's no denying that this is the obvious headline of Watergate. But, I think the bigger story of Watergate is contained in a small detail right there in the movie.

I mentioned above that late in the movie I wondered how they would get all the facts in. In the final fifteen minutes the details fly fast and furious. Woodward and Bernstein state that "the plumbers" were a group of ex-CIA agents and other operatives directed by G. Gordon Liddy, who had a long history of perpetrating dirty tricks on behalf of Nixon. As a direct result of Watergate, we learned that one of the goals of these dirty tricks was to manipulate the Democratic primaries in 1972, such that Nixon would run against the candidate he could most easily beat. History tells us that at the outset of primary season, the most likely candidates were party insiders such as Maine Senator Edmund Muskie and former Vice President Hubert H. Humphrey. In November 1972, Nixon faced Senator George McGovern in the general election.

McGovern was the anti-war candidate, champion of the youth movement with his pledge to end the Vietnam War. When the votes were counted, McGovern won just one just state. Nixon won the election in a landslide. Or, more to the point, Nixon stole the 1972 election by rigging the primaries. All these years later watching All The President's Men and there it is, right in the movie. They go by it quickly, you have to listen carefully or you'll miss it. This is the bigger story of Watergate. The bugging of the DNC seems minor in comparison to the years of illegal acts ("dirty tricks") performed on behalf of Richard Nixon. That, and the fact that their strategy was successful in 1972. Nixon's men may have lost the battle (Watergate arrest), but they won the war (the presidency). Nixon's comeuppance on August 9, 1974 didn't come a moment too soon.

What follows is quoted from the Washington Post (October 10, 1972) by Woodward and Bernstein. It details what "the plumbers" did in their attempt to torpedo the campaign of Ed Muskie.


Law enforcement sources said that probably the best example of the sabotage was the fabrication by a White House aide -- of a celebrated letter to the editor alleging that Sen. Edmund S. Muskie (D-Maine) condoned a racial slur on Americans of French-Canadian descent as "Canucks."

The letter was published in the Manchester Union Leader Feb 24, less than two weeks before the New Hampshire primary. It in part triggered Muskie's politically damaging "crying speech" in front of the newspaper's office. 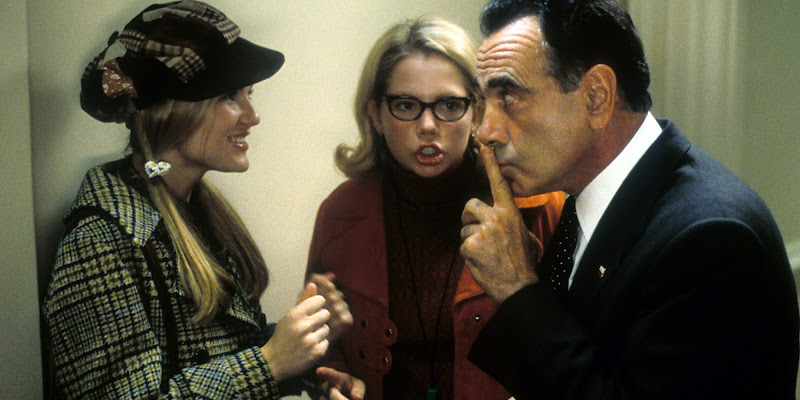 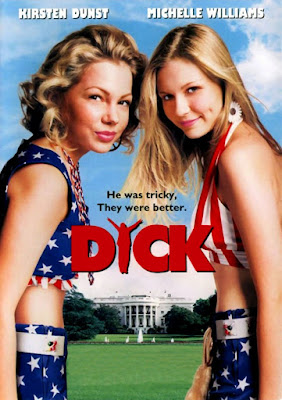 Dick (1999), directed by Andrew Fleming
Dick is a delightful comedy about Watergate, which imagines that all of the Watergate revelations were due to the inadvertent actions of two fifteen year old girls. One of the teenagers lives at the Watergate Apartments, and when the girls sneak out one night to mail a letter the door they blocked open to get back into the building is discovered by the night watchman. He calls the police who arrive in time to find the five Watergate burglars in the offices of the Democratic National Committee.

The next day, the girls are on a class trip to the White House, when they recognize (and are recognized by) some of the Watergate burglars. Richard Nixon ("Call me Dick") appoints the two girls to be the official White House dog walkers. At the White House, they happen upon sites of paper shredding and mountains of cash for payoffs.

It goes on from there with the girls involved with everything from the famous 18½ minute gap to being a source for Woodward and Bernstein, who are played as buffoons by Will Ferrell and Bruce McCulloch, respectively. The movie suggests that these girls are the secret source that Woodward and Bernstein refer to as "Deep Throat". At one point, Woodward tells the girls that the true identity of Deep Throat will never be revealed. "For our safety?" "No, it's just too embarrassing."

The more details you know about Watergate the funnier this is, but even people with only a rudimentary knowledge of these events will find much to like about Dick (the movie). The casting is excellent especially Kirsten Dunst and Michelle Williams as the two girls, and Dan Hedaya as Nixon. The direction and cinematography are first rate as well, but what really makes this movie special is the writing. The movie has a fantastic soundtrack loaded with the songs of 1972, everything from The Jackson 5 to Elton John. Especially great are the movie's final scenes. First we have Nixon's resignation, together with high fives at the Washington Post, while we hear "I've Seen All Good People" by Yes. I won't give away the ending, but let's just say that never has a Carly Simon record seemed more appropriate than during that final helicopter ride when Nixon looks down to see the message that the girls have gone up on the roof to deliver. It's a perfect ending, just perfect.