Raul Midón - Sellersville Theater, 9/21/2016; Midón Is a Brilliant Performer and a True Inspiration 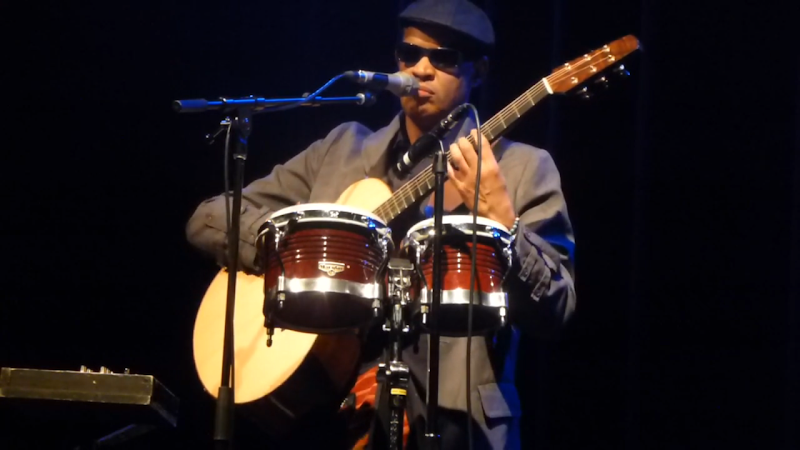 Let me say right at the top that Raul Midón's music is so good and blends so many genres that by rights it should be receiving airplay on many different types of radio stations, both terrestrial and satellite, and as such, his concert appearances should be selling out everywhere.

Unfortunately, we live in an imperfect world, one in which I've yet to hear his latest on the radio, and when Midón took the stage at the Sellersville Theater the audience would have fit into a venue like the Rockwood Music Hall (NYC) or Burlap and Bean (Newtown Square, PA). I can safely speak for that small but adoring crowd when I say that I'm filled with gratitude that Midón played the date and didn't cancel like many others might have. Even though Midón didn't play anything from Soul Eyes, he gave a brilliant performance, had a great rapport with the crowd, and I found him to be truly inspiring.

I like it a lot when an artist offers up new material such as tracks that have yet to be recorded or released. Midón opened the show with a composition that he said would be on his next album, due in March 2017, with the terrific title of Badass and Blind. Midón, performing solo on acoustic guitar played some mind blowing guitar leads on this song titled "Pedal To The Metal".

Midón very generously and very endearingly took the time to explain each song as he introduced it. Aided by the theatre's camera policy (no flash), I captured some quite nice video of the show. Despite its look and sound, this is not a professional video shoot; Bev did the camera work using a Panasonic Lumix DMC-ZS20, a pocket digital still camera. Bev's camera work was as good as the performance and video production assistant Lindsey kept saying, "I love this guy" every time he introduced a song. On the setlist below, click on the name of the song to watch the video.

01. Pedal to the Metal - A superb set opener with tremendous guitar work and a really cool guitar solo.

02. Sunshine (I Can Fly) - This song begins with a solo on the mouth trumpet, a skill that knocked me out when I first saw him do it in 2005. Playing mouth trumpet involves using the mouth in the same way that you would if you were actually playing a trumpet, but there's no instrument. It's quite amazing how Midón makes it sound like an actual trumpet. I had gone to the North Star Bar in Philadelphia to see Shelby Lynne and Midón was the opening act. At the time, I was not aware of Midón, but I so enjoyed his set that I became a fan. It's interesting that the comments I made about him in 2005 are all consistent with the experience of seeing him now. This song comes from his first album.

03.Was it Ever Really Love - Midón is as good a storyteller as he is a singer, songwriter, and musician. This tune is about a hypothetical couple in love.

04. If Only - Another great sounding song from his next album. This one also has some mighty impressive guitar work. Just based on these two songs, I'm already excited about the prospect of his release of Badass and Blind.

05. Invisible Chains - Midón described this one as Rock Steady (reggae), and he played both the guitar part and the bass line as he sang, even throwing in a little rhythm. The songwriting blended perfectly with the style and I would call this a highlight except that all of Midón's set was that good.

06. Love is Blind - This is a lovely tune that Midón wrote for a collaboration project that was backed by the Dutch Metropole Orchestra, which Midón pointed out is one of the few jazz orchestras in the world.

07. If I Could See - In addition to his other talents, Midón also writes some poetry. This is a poem set to music, which is different from a song as Midón explained.

08. Separate Identity - Midón is a man with many musical projects. This is an instrumental, which Midón said will be part of an all guitar album that he is working on to sharpen his already prodigious guitar skills.

09. Listen to the Rain - Midón told an interesting story about working with Rickie Lee Jones and about the reason that she performs on both guitar and piano, saying, "I tell better stories on piano." This is Midón's piano song.

10. Mi Amigo Cubano - Midón co-wrote this with Bill Withers and told a very amusing story about their songwriting process. He also noted that they can be seen working on this song during the film documentary about Bill Withers called Still Bill.

11. Red Green Yellow - Both Midón and his brother became blind as premature newborns when they were placed in an incubator without eye protection (Wikipedia). It's really disarming to think about what the concepts of color means to a person who has never seen. That's what this song is about.

12. Waited All My Life - This one comes with a most endearing story about writing this song for the girl who later became his wife. He talked about his state of mind at the time, lamenting the various things that he could not do. Then he realized that he could focus on the things he could do, primarily the ability to write a song. He sang this at the time of their second or third date, I'll leave the completion of the story to Midón, click and watch the video. We all have things that we cannot do and I find this song, Midón's entire set actually, to be truly inspiring.

13. State of Mind - The very memorable "State of Mind" is the title track of Midón's 1985 release, which was produced by legendary A&R man and producer Arif Mardin working together with his brother Joe. The song contains more of Midón's incendiary acoustic guitar work. The impressive drum solo introduction was played, in part, using one hand on the bongo drums with the other slapping his guitar body.

Many thanks to Sellersville Theater for the excellent sound and lights, Beverly Kates for the camera work, and Lindsey Mitchell for the video production assistance.