Game of Thrones' Return on HBO Merits Inclusion in the Top Ten Television Moments That Captivate the Culture; Plus Two GOT's Podcasts You Will Enjoy 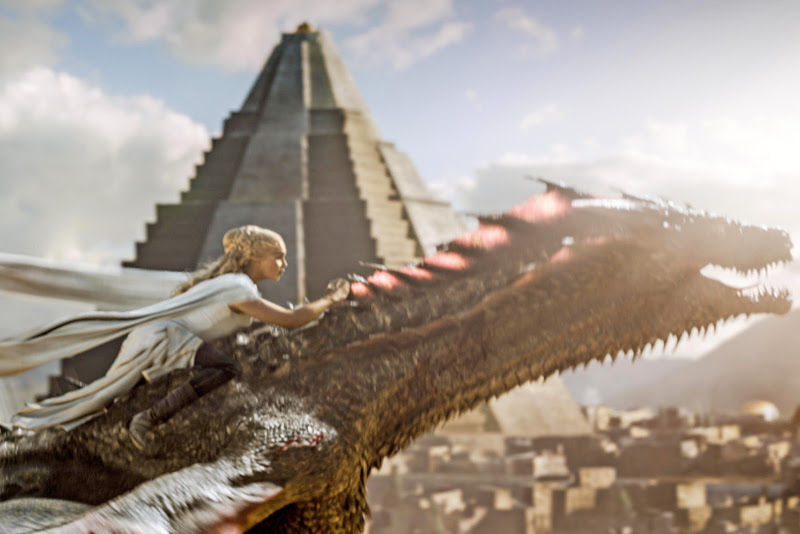 On the Season 8 preview Nerdette Recap podcast, Peter Sagal said something to the effect that the internet seems to be inundated with Game of Thrones right now. No kidding.

The nearly two year hiatus between Seasons 7 & 8 hardly seems as cruel now as it did in 2017 when it was first announced. The real problem was that the show got ahead of the books by George R. R. Martin (A Song of Ice and Fire), upon which the series is based. Although critics have complained that as a result the writing in Season 7 was not quite up to snuff, as it were, the delay has obviously worked to the advantage of HBO's most watched and most expensive show. In the last couple of weeks (Season 8 debuted last night), attention on the internet has grown to a fever pitch. And the attention is only likely to increase over the next six weeks as Game of Thrones winds to its conclusion.

And so it is that Game of Thrones has touched many nerves and in so doing it takes its place in the pantheon of television 'moments' that have captivated the culture. The following list is completely arbitrary and you can decide for yourself where Game of Thrones falls in this context. Feel free to add your input by posting a comment below.

1. Last episode of M*A*S*H
Topping every list of series finale viewership is the dramatic, two hour conclusion titled, "Goodbye, Farewell and Amen" (I'm getting choked up just writing the name). M*A*S*H had so endeared itself to viewers during its eleven season run, which ended in February 1983, that the finale directed by Alan Alda drew nearly 106 million viewers.

2. Dallas: Who Shot J.R.?
On the hit show Dallas, Larry Hagman played J.R. Ewing, a character that America loved to hate. In March of 1980, the third season finale ended with J.R. getting shot. Viewers had to wait eight months to find out whether the character was alive or dead and CBS had a field day with the rampant speculation that went on all summer until Episode 4 of Season 4 aired that October. The conclusion to the Who Shot J.R. publicity juggernaut drew about 82 million viewers.

3. Last episode of The Sopranos
On June 10, 2007, America was glued to their sets for the series finale of The Sopranos. Although its estimated 12 million viewers looks paltry compared with the above, The Sopranos was on HBO, a premium pay channel, and had a cultural impact way beyond its numbers. Many attribute The Sopranos as ushering in the current "golden age of television". The open-ended conclusion to the episode left the fate of the characters up to the viewer and has stimulated discussions that continue whenever great series are discussed.

4. Assassination of JFK
If you were alive and sentient on November 22, 1963 you likely know where you were the moment you heard that President John F. Kennedy had been shot. The nation turned to television for news and comfort, many to CBS anchor Walter Cronkite. Dan Rather was a field reporter for CBS that day in Dallas. The collective viewership gasped in shock two days later when prime suspect Lee Harvey Oswald was murdered on live television.

5. The Beatles on Ed Sullivan
We started hearing the rumblings from England during 1963, but The Beatles didn't come to America until February 9, 1964 to appear on the Ed Sullivan Show. They performed live on TV and in winning over the estimated 73 million viewers, The Beatles did, in fact, conquer America.

6. Watergate
Watergate, the scandal, took its name from the building where the Democratic National Committee had its office that was burglarized in June 1972 by operatives that were associated with the aptly acronymed Committee to Re-Elect the President (CREEP). The President, of course, was Richard M. Nixon and as the extent of his involvement in this event began to unravel, the very definition of "must see tv" included Senate Judiciary Committee hearings chaired by Senator Sam Ervin. It concluded in August 1994 with Nixon's resignation and departure from the White House. For more Watergate, read this.

7. O.J. Simpson
The murders of Nicole Brown Simpson and Ronald Goldman unleashed a media firestorm. From the white Bronco car chase to the courtroom trial, presided over by Judge Ito, it was all on TV and the nation was riveted. No matter what opinion you held, the parade of evidence and the fact that all of the participants seemed to come from central casting (including defense attorney Johnnie Cochran, "If it doesn't fit, you must acquit") made for compelling daily viewing in the summer of 1995. Even if the not guilty verdict didn't please everyone, the participation of defense attorney Robert Kardashian insured his family the tabloid recognition that ultimately resulted in a reality TV show that has haunted us ever since.

8. The last episode of Johnny Carson's Tonight Show
Johnny Carson so defined the concept of late night talk show that when he called it a career after 30 years it was the biggest of deals. After doing 4,500 shows, he did a full week of farewells culminating in a final two-hour episode for which NBC estimated a viewership of 55 million.

9. Last episode of Seinfeld
Seinfeld, the weekly NBC television show "about nothing", was so culturally influential and remains so ubiquitous that it's hard to believe that it ended over twenty years ago. Its dialogue became catchphrases and viewers knew the plots of every episode. So, after nine seasons and 178 episodes, Seinfeld took its final bow with a two part episode that aired in May 1998 with a viewership of 76 million.

10. The last episode of The Fugitive
Beginning in 1964, at a time when most television sets were still black and white, The Fugitive was on for only four years. It so touched a nerve in the culture that we remember it still, as well as a hit movie version produced in 1993. ABC made thirty episodes per year and when the weekly ratings dipped in the fourth year they ended the season and the series with a ground breaking finale that set the mold for future series finales. This show was a classic tension builder as the falsely accused title character, played by David Janssen, pursued the one armed man that he saw leaving the scene of his wife's murder, all the while with police lieutenant Gerard (played by Barry Morse) hot on his trail. The finale took place over the last two episodes 1967, drawing an astounding 78 million viewers despite the fact that it aired in August, a time when television networks aired only reruns during the summer.

Spoiler Alert: Do not watch unless you have seen Seasons 1 through 7 of Game of Thrones.


There are many podcasts dealing with Game of Thrones, providing further evidence of its impact on the culture. I've read about them and sampled some, and here are two that I wouldn't miss.

Binge Mode: Game of Thrones
This podcast comes to us from the good folks of The Ringer website. It is essentially a 1+ hour conversation between Mallory Rubin and Jason Concepcion, two people who are super knowledgable. You might find these two to be way too into it, in a good way. No detail of plot or presentation is lost on them. They really care about their popular culture. To my way of thinking, this is exactly what you want in a GOT podcast. I always listen to this one first.

Nerdette Recaps Game of Thrones with Peter Sagal
This show has high production values for a podcast, very similar to the NPR game show Wait, Wait... Don't Tell Me, hosted by Peter Sagal. On the podcast, however, Sagal seems more like the guests than the host. There's a good reason for both things. Greta Johnsen and Tricia Bobeda are always interesting women who do a podcast called Nerdette, about all things nerd. When it was determined that Sagal and they were kindred spirits, they decided to join together for this Game of Thrones podcast. Plus, all of the above are produced under the auspices of WBEZ, an NPR radio station which just happens to produce that hit radio game show. The thing that sets this show apart from the other podcasts is a strong and irreverent sense of humor shared by all three principals. The hour-long conversation is always a fun listen. 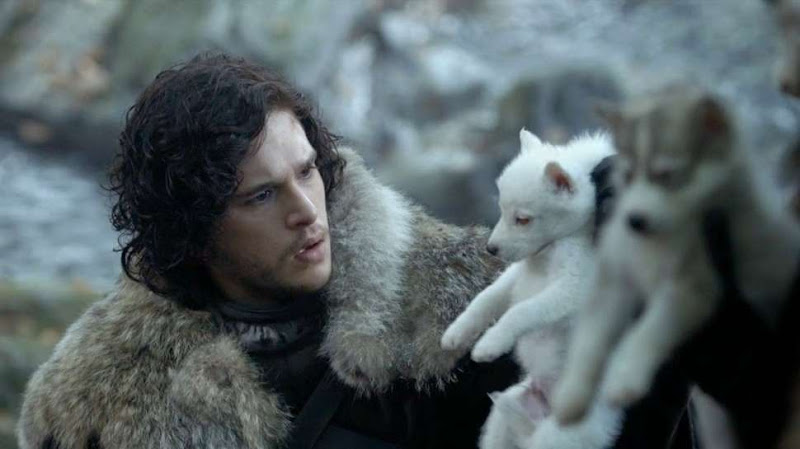 Jon Snow (Kit Harington) with his direwolf Ghost and Nymeria