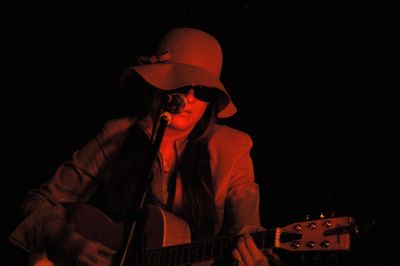 Pianos, located on New York's Lower East Side, a few doors down Ludlow Street from the Living Room, is notable for many things not the least of which is a terrific five dollar happy hour burger special, and a delicious gazpacho. Pianos also offers multiple music venues, with a downstairs club where the steady stream of equipment carried in suggests that the music leans more toward rock than the upstairs venue, where like the Living Room, singer-songwriters perform for free, earning their keep through voluntary donations and selling their cds. 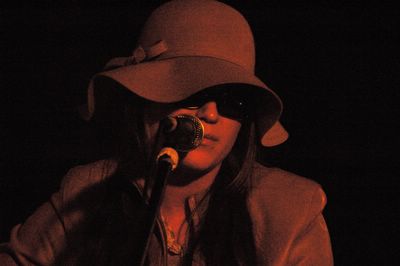 Walking back after seeing Jackie Allen at Joe's Pub, we stopped into Pianos just in time to catch Melody Gardot who had just gone on. The second floor venue at Pianos is essentially a room with a microphone, with no stage and no lighting to speak of. Melody at one point, humorously pointed out the irony that a club called Pianos doesn't have a piano. Melody sounded great playing a number of tunes from her Some Lessons EP, including the title track, to a small but dedicated audience who were glad to be able to hear Melody above the din coming from the bar on the other side of the room. Melody also offered a few new songs, including one called "Worrisome Heart" that she mentioned might wind up as the title track on the new album she's currently recording. 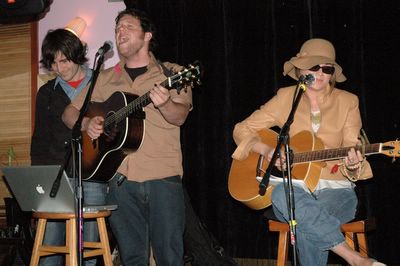 Melody was performing as part of Pianos' every Tuesday Cross Pollination concert series, described on Pianos' website as:

The set-up of the Cross-Pollination event is: Two of the best singer-songwriters in NYC each play a 40 minute solo set. This is followed by a three song collaborative set during which both artists share the stage and the mic.

The other participant this night was fellow Philadelphian Seth Kallen who had played his set earlier. Melody and Seth played a thoroughly enjoyable three song duet set for Cross Pollination. It was equally nice to take a little time after the set for some conversation with both Melody and her mom. All told a very happy bit of unexpected happenstance to be able to see Melody as well as the other two shows on tonight's schedule. Remember to click on each photo to enlarge. All photos © W.Kates, 2006.