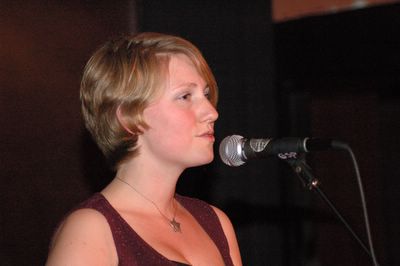 Victoria Vox brought her Jumping Flea Tour to Grape Street in Manayunk tonight and offered a thoroughly charming performance. Undaunted by a tiny turnout, Victoria played an excellent set of songs drawn mostly from her current album Victoria Vox and Her Jumping Flea. The stories between the songs were as engaging as the music; with a refreshing sense of humor, Victoria told about growing up in Wisconsin, living in France as an exchange student, and the travails of life on the road as a struggling musician. 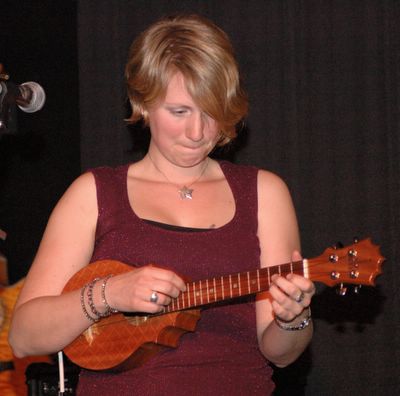 Accompanying herself on guitar and ukelele (the jumping flea) she played a nice mix of original compositions and cover tunes such as an inspired medley of "Somewhere Over the Rainbow" and "What a Wonderful World". The ukelele gives her music a nice retro feel, evoking the sound of the thirties and forties. Victoria embraces the Hawaiian ukelele tradition both in some of her song selections, and in her pineapple ukelele. Her original composition "America" has a beautiful melody and a touching sentiment. "Guilty" from the Amelie soundtrack sounded especially good in Victoria's rendition. Her time in France adds a really nice dimension to her music with some songs sung beautifully in French that sound cool even without understanding the words. 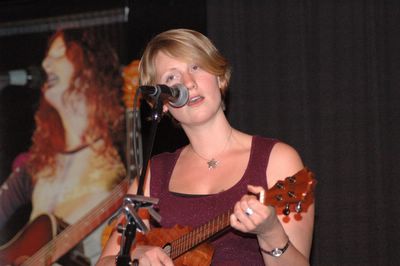 One of the bravest and toughest things an artist can face is to perform in front of a sparse audience, but the show tonight seemed no different than if it were performed for six hundred or six thousand instead of the six who were there when Victoria took the stage which is a huge testament to Victoria's professionalism and artistry. The venue gradually filled in and there was a more reasonable crowd listening by the end of the set. Raul Midon was previously the only artist I'd ever seen play horn without actually using an instrument, doing mouth sound that emulates a trumpet. Victoria used a similar technique on "My Darlin' Beau" a new original composition that sounds requisitely old, only her mouth sound was more like that of a french horn (naturally). Victoria was great to talk to after and as a bonus for multiple cd purchases, she includes a nice little cd sized cloth tote bag hand decorated with a thank you message. 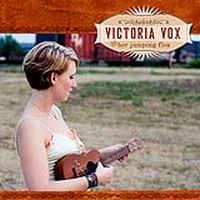 The World Cafe Live website listing of Victoria's August 11th booking there deserves credit for bringing Victoria to our attention and a quick link to her website revealed tonight's appearance at Grape Street. Victoria Vox and Her Jumping Flea is a quality piece of work that should rightfully find an audience with just a little exposure. Now if we could only get WXPN to play the record. Visit Victoria on MySpace or at her website, and go see her when she comes to your town. Remember to click on each photo to enlarge. All photos © W.Kates, 2006.