Norah Jones, Academy of Music, Philadelphia, 12/02/2016; The Day Breaks Tour Stops in Philadelphia, Plays to Adoring Full House Along With Josh Lattanzi and The Candles 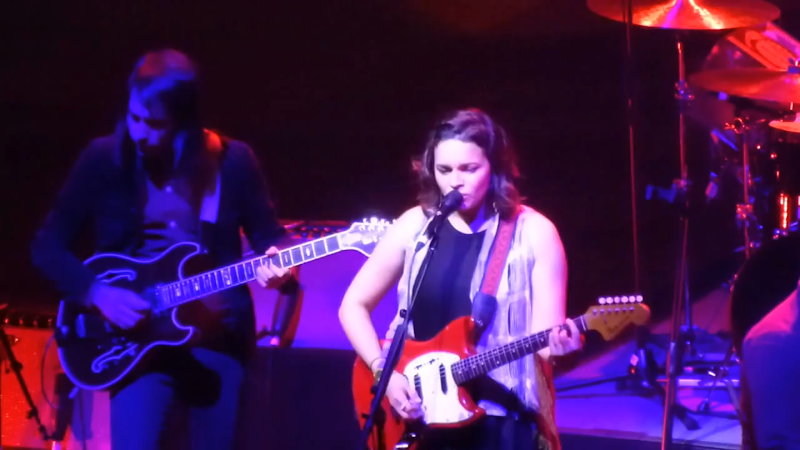 Seeing Norah Jones do a big time concert at an orchestra hall always seems such a far cry from the small clubs of New York's Lower East Side, where I've seen Norah perform many times. This time it was the venerable former home of the Philadelphia Orchestra, the Academy of Music, on Friday night December 2nd. The hall was packed for Norah, and she delivered her usual first rate performance.

She opened with "Sinkin' Soon", a tune that didn't quite grab me when it appeared on her 2007 album Not Too Late. At the Academy, however, it only took this track about two minutes to totally draw me in and turn my head around. That's the power of live music. I was especially captivated by the jazziness of the piece, which featured Jones on piano. Have a look at another recent performance from November 28th in Kingston, NY (linked to the setlist below).

Jones followed with "I've Got To See You Again", still on piano and almost seeming to revel in the very jazzy performance of this track that comes from her debut album Come Away with Me. Norah, still on piano, went into "Out On The Road" from her Little Broken Hearts album (2012). The sound mix was very good, even from up in the nosebleed seats, and Norah was in excellent voice.

"Tragedy" was the evening's first selection from her newest album, Day Breaks. Jones' piano combined with the organ for that beautiful mixture of country, jazz, and blues, the signature sound of her first album that she so nicely revisits on Day Breaks (video link below).

Jones moved to electric guitar for the next several songs, which included the crowd-pleaser "Come Away With Me" (video link below). She switched to acoustic for a quite nice Jerry Garcia cover, "It Must Have Been The Roses". The songwriter was Robert Hunter and the track first appeared on Garcia's second solo album Reflections in 1976 (video link below).

"Chasing Pirates" was another crowd favorite. Jones played electric piano for this hit that came from her 2009 album The Fall. For the next handful of songs, she returned to piano starting with the very jazzy "Burn" from the new album, which lead into her first mega-hit "Don't Know Why" (video link below). Then came a trio of solo piano songs which I thought was one of the coolest moves in the show (video links below). She began with a standard, "The Nearness of You", a Hoagy Carmichael composition from 1938 with lyrics by Ned Washington. Next came a very personal performance of "Little Broken Hearts". The solo set concluded with "And Then There Was You" from the new album.

The band rejoined Norah for the final three songs of the set, all from Day Breaks. "Don't Be Denied" was followed by "Flipside", which set the stage for "Carry On". "Carry On" (video link below), was the first single from Day Breaks and it's such a throwback to the sound of her debut, that it made a perfect set ender.

A standing ovation brought Jones back for a three song encore, "Sunrise", "Creepin' In", and "How Many Times Have You Broken My Heart?". For her encore, Jones had her band group around a single microphone, which tributes an early recording method. I'm not necessarily a fan of using this technique in concert; granted it's a nice throwback, but seeing Jones do this on her last tour, I don't think the sound quality of the encore compares to the sound of the rest of the set. That said, it was still exciting to hear these songs, and the audience sure didn't seem to mind.

Norah's back-up band on this tour is a group known as The Candles. They are lead by bassist Josh Lattanzi who also served as the night's opening act. When his set began, Lattanzi took the stage solo, singing and accompanying himself on acoustic guitar. As the set progressed, the other musicians in The Candles joined him, gradually, adding a musician or two with each song until the full group was on stage. Their good sounding set was drawn mostly from The Candles latest long player, Matter + Spirit.

Watch "It Must Have Been The Roses". Norah covers Jerry Garcia (song written by Robert Hunter).