Most music critics, partially as a holdover from the days of print journalism, use a deadline of November 1st for the purpose of looking at the year in music. Even though the news cycle is 24 hours or less at most online publications (even music), best of the year lists starts popping up after Halloween. My usual cutoff for the year in review is Dec. 1st, however, I'm not really locked in to an arbitrary deadline. Which is how, or maybe why, I found myself listening this morning to a new Paul Thorn collection that was released just last Friday, December 9th. December is ordinarily a bleak time for new releases; all the major new albums and all the interesting vault releases and box sets come out before the end of November (even the new Christmas discs) in order to be positioned for holiday purchase.

Normally, I don't even consider best of albums for my year end top ten (or twenty, or thirty, or fifty) list.

So why exactly do I find myself listening to Paul Thorn on Sunday morning December 11th with only two weeks until Christmas, a time that I ought to be listening to Christmas music? For starters, the article I posted two days ago covered 65 new Christmas releases which I've been listening to and writing about since mid-October. So, why Paul Thorn? Over the course of the last seven years or so, I've become increasingly aware of Thorn, not only hearing the occasional track of his but also some of the artists he has produced. It's all been good, however, with so much new music to absorb all the time my interest never seemed to gel, to take on one of his albums, or embrace his career.

Until now. This new best of release seems perfectly designed for someone like me, someone who has liked what little he has heard, but may need a more formal introduction. The Best Of Paul Thorn does precisely that. After listening to both the new album and the free download Acoustic Show in one sitting, I realized that I'm liking this guy quite a bit and this is something I should have done long ago. Thorn has a big bluesy electric guitar, a singing voice with just the right amount of world weary gruffness, and his music is rootsy Americana, music with strong elements of blues, country, rock, gospel, and soul. It's a southern rock down home ass kicking.

As the following description from Thorn's blog site explains, he has not yet had a hit, but I would place him firmly in the sphere of John Fogerty and Tony Joe White, not exactly household names themselves, except in certain musically aware housez.


We can't issue a Greatest Hits package. Paul has never had a hit. So we listened to your feedback at shows, asked around, and came up with a twelve-track anthology that spans two decades of Paul Thorn's remarkable career. The Best of Paul Thorn highlights the most important themes in Paul’s music - from the influence of his father and uncle in his past (the autobiographical “Pimps and Preachers”) to his call-and-response concert staple (“Mission Temple Fireworks Stand”) and his life-affirming outlook going forward (“What Have You Done To Lift Somebody Up”). A newly released extra track, “Rose City,” takes up the final slot on the album. Paul wrote this rocker years ago while working as a staff writer for Rick Hall at FAME Studios in Muscle Shoals and finally recorded it in Baton Rouge, Louisiana in 2015.

As a special bonus, we will include a download card that gets you a special live show recorded in Nashville back in February 2016 - The Paul Thorn Acoustic Band performing nine of your favorites - at no extra charge.

Inclusion of the free bonus Acoustic Show is a genius move. Everything about this live recording is superlative, especially the band sound. My first (mistaken) assumption upon seeing that an artist so known for his electric guitar performing an acoustic show would somehow be a lessor performance; well that would be wrong. Thorn's guitar sounds like the only thing acoustic in this show. The arrangements are amazing and I absolutely loved the keyboards and I think, perhaps, set against the acoustic guitar, you might be hearing much more of the keyboard work. But the main thing is that Thorn's guitar doesn't lose a thing by being acoustic. His guitar gets a nice full sound, completely not what you might expect, and vocally he's at the top of his game. This free bonus, by itself, is worth the price of the album. Listening to this just makes me want to see Paul Thorn live ASAP.

Watch "That's Life" recorded live @ Red Clay Music Foundry 10/24/2015. Thorn wrote this song for his mother and all the lyrics are phrases that she used to say. 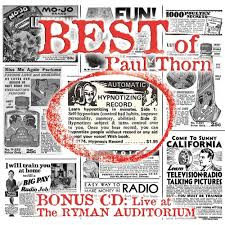 Tracklist: Click song title to listen
1. I Don't Like Half The Folks I Love
2. Mission Temple Fireworks Stand
3. Snake Farm
4. Pimps And Preachers
5. Long Way From Tupelo
6. Burn Down The Trailer Park
7. Bull Mt. Bridge
8. What The Hell Is Goin' On?
9. What Have You Done To Lift Somebody Up?
10. Old Stray Dog & Jesus
11. I Have A Good Day Every Now & Then
12. Rose City

The bonus download of the Acoustic Show was recorded 2/27/2016 at the Ryman Auditorium in Nashville. Watch this fan-shot video of the final song complete with introduction including band intros.

Bonus Video: Watch this acoustic version of "I Don't Like Half the Folks I Love", a song that is on the Best Of Paul Thorn, offering a refreshing bit of down home country candor.