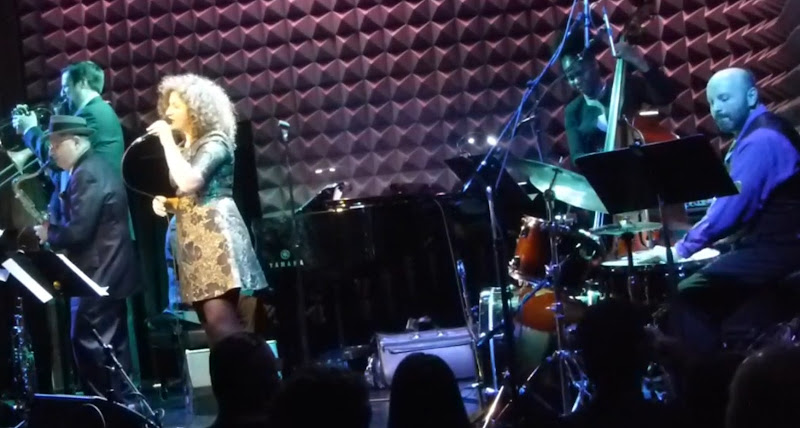 Early last Saturday, I posted this: "I'm excited to see Svetlana & The Delancey Five tonight at Joe's Pub. If you're in the New York area, there are only a few tickets left and you must see this delightful singer and her amazing band. I don't see how music can get any better than this." Within about three minutes at Joe's Pub, I answered my own rhetorical question. The only thing better than the music on the debut LP by Svetlana & The Delancey Five might be hearing it live. No matter how good a recording may be, even a live one, there is no substitute for being right there in the moment to experience a great singer and band. There's nothing else quite like it.

Svetlana & The Delancey Five were in fine form for her birthday show Saturday night, March 4th at Joe's Pub. This is one of the best venues in New York, in that it's small and intimate, with excellent lighting and sound. Svetlana voice was clear, true, and strong. The band was tight, loose, and played some superb solos.

The opener was an instrumental, "Bernie's Tune", a jazz standard written by Leiber and Stoller with Bernie Miller (hence the name). Svetlana followed with the first of five songs that she drew from her debut album Night at the Speakeasy, which I included in my top 10 list of Best Music of 2016. "Sometimes I'm Happy" was the first such song, a totally delightful standard: "Sometimes I love you, sometimes I hate you / But when I hate you it's 'cause I love you." It was also a pleasure to hear "It's All Good" and "Lady Be Good", the latter also featured tap dancer DeWitt Fleming Jr. who, at one point, seemed to duet with the drum solo. I had momentarily forgotten that Svetlana had done a Beatles' cover on the album, so when she said that the next song would take her to Liverpool and New Orleans, I was pleasantly surprised by the New Orleans-style treatment of "Because" from the Beatles Abbey Road, so good. The fifth song from Night at the Speakeasy was the encore, and we will get to that shortly.

There were two new originals, which got their world premiere at the show. "Baby I'm Back" featured a horn arrangement with piano, including a piano solo. The song's two best features are the melody (by Svetlana and Ryan Shea Smith) and lyrics (by Svetlana). I knew I liked it when I first heard it; with repeat listens to the video, my appreciation only grows. The other new song was "It Is You" (music by Svetlana / Ryan Shea Smith + lyrics by Svetlana). Both her introduction and the song itself was so sweet, sincere, and tuneful you could not help but fall in love with it. These new songs are so good that I can not wait for the second album.

In addition to the opener, there were three more cover songs not from the record, and they were all great to hear. The full house at Joe's Pub was treated to some fine genre bending on the "Tennessee Waltz", a country standard written by Redd Stewart and Pee Wee King, which got an uptempo horn arrangement with some swinging solos on sax, trombone, and trumpet. "Pure Imagination" was sweet in more ways than one. The song was written by Leslie Bricusse and Anthony Newley for the original version of the movie Willy Wonka & the Chocolate Factory; it was sung by Gene Wilder in the film. The Irving Berlin standard "Blue Skies" closed the show, complete with solos from Michael Hashim on sax, Charlie Caranicas on trumpet, Corey Wallace on trombone, William Test on piano, Endea Owens on upright bass, and Robert Garcia on drums (who also duetted again with Fleming on tap). Oh, and the exuberant vocals were by Svetlana.

The band returned to the stage minus Owens and her bass (who had to leave after "Blue Skies"). I really enjoyed Svetlana's subtle sense of humor when she introduced her last song, "You Are Like A Song", sung in Russian. "...For those of you who don't speak Russian ...yet." This beautiful song capped off an excellent set by Svetlana & The Delancey Five. I had been wanting to get up to New York to see this group play live for a long time, and I am quite glad that the birthday show at Joe's Pub presented an opportunity that I could not pass up.

Many thanks to Svetlana Shmulyian for the setlist, musician credits, and for an incredible night.
Many thanks to YouTube user WANDERMIND for the videos of tracks 3, 5, and 6.
Many thanks to Bev Kates for camera work and to Lindsey Mitchell for video production on tracks 7-11.
Whatever these videos lack in sound quality, they more than make up for with live energy. 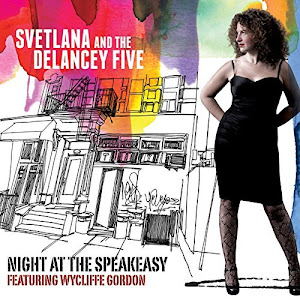 Svetlana & The Delancey Five - Night at the Speakeasy
Buy at Amazon