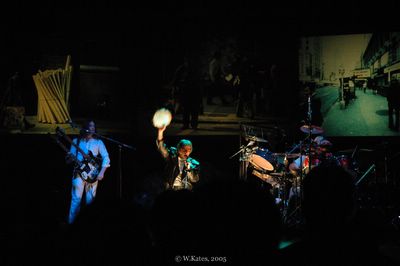 .The Lamb Lies Down on Broadway
Despite the many glowing testimonials I'd heard and read, I couldn't shake a certain basic skepticism regarding The Musical Box recreations of classic Genesis concerts, after all this is just a cover band, right? That, combined with the notion that Father's Day gifts should really not be any more extravagant than a $15.00 tie, led me to initially think that Jenn had taken leave of her senses when she made me a present of two tickets to the Musical Box performance of Genesis' Lamb Lies Down on Broadway tour to celebrate the 30th anniversary of the original Genesis tour from 1974-75, booked for four nights at the Xanadu Theater in the Trump Taj Mahal casino in Atlantic City, NJ for the final U.S. performances of this tour leg. 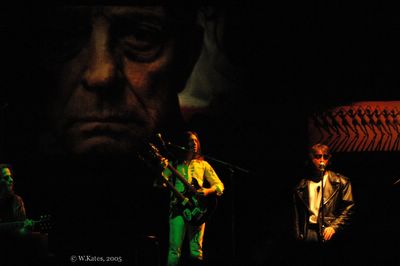 .Broadway Melody of 1974
It's likely that nothing I could say here could possibly reverse any similar skepticism in the uninitiated reader, however I will try. This Canadian band of music lovers and ultimate Genesis fans have far transcended the cover band limitations and have for all intents and purposes become Genesis, circa 1973-1975. Let's start with the music; all five musicians are so good at their respective instruments, that the live rendering of Genesis' music sounds every bit as great now as it did then, a truly remarkable feat, in and of itself. From the first moment when the band kicked in at the beginning of the first song with the power of the bass pedals, it was instantly clear that we were in for a musical and sonic treat. 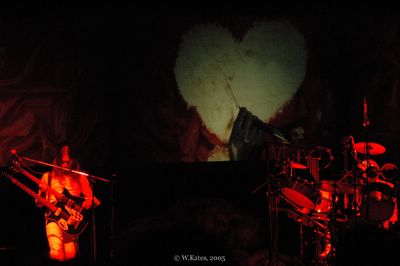 Genesis music during this era was complex like a classical concerto, intensely rocking one moment, soft and delicate the next, and always supremely melodic. The Musical Box does this music proud, from start to finish. There was no weakness I could detect in the musical performance; each member played their part as well as their original counterpart, actually intensifying the music at times. They played the same set list that Genesis did on this tour, which was The Lamb Lies Down on Broadway album in its entirety, followed by "The Musical Box" and an encore performance of "Watcher of the Skies." 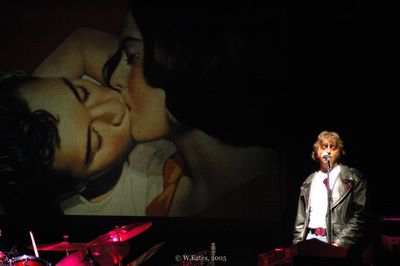 Denis Gagne does an excellent job with the Peter Gabriel role as singer, showman, and musician. He doesn't look exactly like Gabriel, but he's certainly close enough. Likewise, his voice is not an exact mimic of Gabriel's but it's similarity is uncanny, especially in the many vocal inflections that Gabriel used. Gabriel was responsible for the highly theatrical aspect of Genesis' live performance during this era, and Gagne does all the moves and wears all the costumes just as Gabriel did. 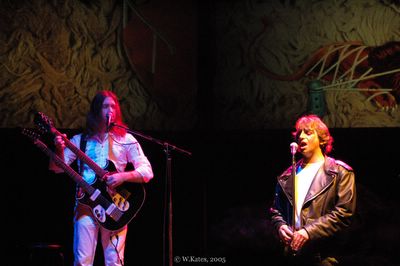 François Gagnon plays the lead guitar just like Steve Hackett, who in retrospect was largely responsible for the progressive nature of Genesis' music. Sébastien Lamothe plays the double neck Micro-Fret six string bass and Rickenbacker twelve string guitar along with the bass pedals, just as Mike Rutherford did. Éric Savard plays all the keyboard parts with all the virtuosity of Tony Banks, exactly matching the many keyboard sounds Genesis used. Martin Levac does a great job on drums and occasional vocals, even perfecting the same tilt of head that characterized Phil Collins' look behind the drum kit back then. Collins himself thrilled both band and audience recently when he joined the band onstage in Geneva to perform "The Musical Box." Hackett has also performed an encore song with them at the Royal Albert Hall in London in 2002; Gabriel and Rutherford have both attended shows. 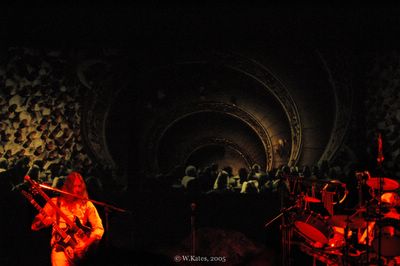 ."It's the bottom of a staircase that spirals out of sight" - The Carpet Crawlers

To stage an accurate recreation of a Genesis tour, the Musical Box does tremendous research to duplicate the staging down to the last detail. The Lamb tour was never filmed, so they had to rely on "hundreds of photos and slides of the original concerts, videos, amateur films, articles from papers and magazines, as well as information offered by numerous people who either worked on or attended the shows." The stage set, the lighting, the special effects, and the costumes all match the original production exactly. For The Lamb Lies Down on Broadway tour, The Musical Box are actually licensed by Genesis and Peter Gabriel to perform this show. To present the 1124 slides that were used on three rear-projection screens to illustrate the story of the Lamb, they were assisted by David Lawrence who was the original slide operator during the Genesis tour. The slides used in the Musical Box production are duplicates if not the original slides. Similarly, the costumes are identical to those worn by Gabriel. 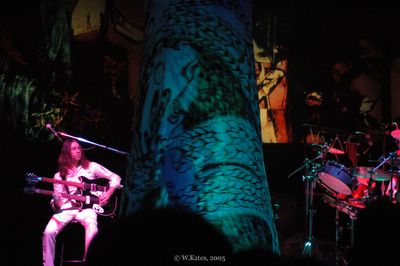 On their website, they describe the pre-production for this project, in which Tony Banks allowed the band access to Genesis' original 24 track masters of the Lamb recording sessions at the Farm Studio in Britain. "Some instruments and pieces on the album are very hard to pick out accurately. It has been a unique and valuable opportunity to be able to listen to the original recordings so that each instrument and vocal line can be identified and recognized in order to be able to more accurately reproduce this on stage. Sebastien (bass) and Denis (vocals) were able to go through each song and each of the 24-channel recordings to work out sections that had been previously difficult to hear." 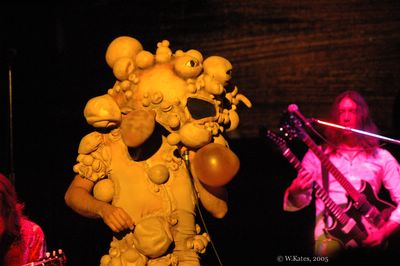 A historically accurate recreation of a rock band's tour is unprecedented; the only comparisons that come to mind are classical music, in which the classical repertoire is constantly reproduced by orchestras all over the world, mostly without the benefit of recordings or photographs to provide reference points on the original compositions and performances. The original instrument movement does exhaustive historical research in the attempt to reproduce classical music in the same manner in which it would have been performed at the time it was written.

Similarly, The Musical Box uses the original instruments (Taurus bass pedals, ARP Pro Soloist sythesizer, Mellotron, Hammond organ, Leslie amplifiers, Rickenbacker guitars, etc.) that were used by Genesis to create this music, in order to capture the exact sound. The other parallel that comes to mind would be the theater, in which various companies can perform a play or a musical without direct participation of the original composers or performers. Genesis in this period combined the best aspects of classical music and theater in their brand of progressive rock, and in this context, The Musical Box has actually become the current day touring company of Genesis. 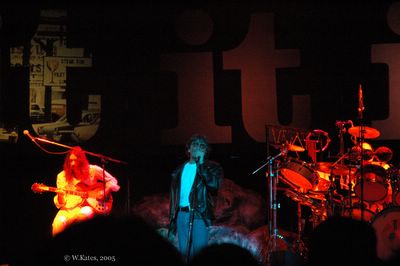 For anyone who has ever enjoyed the Gabriel era of Genesis, including Nursery Cryme (1971), Foxtrot (1972), Selling England by the Pound (1973), and The Lamb Lies Down on Broadway (1974), seeing The Musical Box perform is a chance to "take a little trip back" to experience this music played live as it was done by Genesis at the time. For anyone who actually saw any of these tours, seeing The Musical Box recreation is revelatory – you will not understand the magnitude of their accomplishment (as I didn't) until you experience it for yourself. 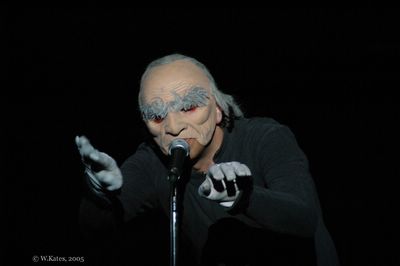 In the meantime, go to the website where you will find a number of video clips from both the Lamb and Selling England tours in which you can get a little sample of what The Musical Box can do; a DVD is planned. If the best gifts are ones that the recipients would not necessarily buy for themselves but ones that they would highly enjoy, I'd have to say I've received the ultimate gift (although I still say she spent too much!). Thanks J. 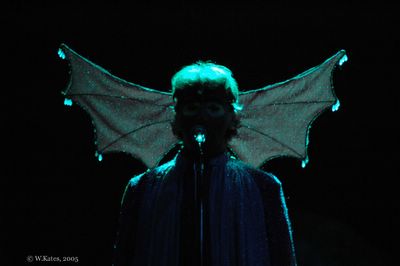 .Watcher of the Skies

Anonymous said…
it is not too much if it made you happy. you certainly deserve at least a concert ticket for all that you have done to help me out. love, jennifer
6/28/2005

Anonymous said…
that 'colony of slippermen' picture is probably my favorite you've ever taken...!
3/20/2009