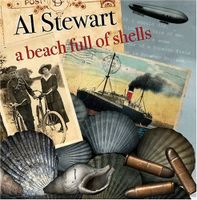 A Beach Full of Shells is Al Stewart's first U.S. release in ten years, not counting collections and live recordings. Stewart has always been one of our more literate and tuneful singer-songwriters. I can still recall being first introduced to Stewart's music by disc jockey Luke O'Reilly who at the time was an exchange student at the University of Pennsylvania who came over from Britain with an excellent record collection which he freely shared on his WMMR radio program in the formative days of fm progressive rock radio (1970-71). O'Reilly later became Stewart's manager.

Although he began recording in the sixties, it was a string of albums in the early seventies that included Past, Present and Future, Modern Times, Year of the Cat, and Time Passages that gave Stewart his greatest notoriety, mostly due to the huge worldwide success of "Year of the Cat." He's worked steadily over the years, with 1988's Last Days of the Century being another high point. Initial indications are that this new album is prime Al Stewart. Here's hoping that's true.