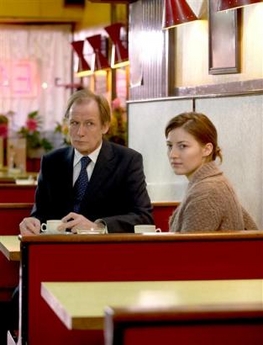 Being friends with Bono and Bob Geldof and sharing the mission to help end world poverty, especially in Africa, and being a filmmaker rather than a musician, Richard Curtis decided the best way of furthering the cause was to write this movie which premiered on HBO on June 25th. Directed by David Yates, The Girl in the Cafe is ostensibly a love story set in the midst of this year's G8 summit, fictitiously located in Reykjavik, Iceland.

In his previous efforts such as Four Weddings and a Funeral, Bridget Jones's Diary, Notting Hill, and Love Actually, Curtis has proven himself the master of the British romantic comedy, writing all of the above and also directing the latter. The love story in The Girl in the Cafe is the calling card to attract viewers to hear the political message. Bill Nighy, the aging singer from Love Actually, does a fine job as Lawrence, the assistant to the UK's Chancellor of the Exchequer. Lawrence by chance meets Gina, played by Kelly MacDonald, in a cafe; she's at least twenty years younger, they strike up a conversation which leads to dinner which curiously (conveniently) leads to an invitation for her to accompany him to Iceland for the G8 summit whilst knowing absolutely zero about her, other than she's Scottish which we can deduce by her accent.

Curtis is well known for having a great sense for selecting the music used in his movies, and The Girl in the Cafe starts off looking and sounding great, with artfully composed cinematography accompanied by Damien Rice's "Cold Water" which plays both at the beginning and at the end. The political message is strong (is is really possible that 30,000 die of starvation every day?), important (the assembled powers of the G8 summit have the power to eliminate this if they so choose), and timely (the G8 summit takes place in a few weeks). If you want to know what has motivated the Live 8 concerts, this movie spells it out very clearly.

Unfortunately, the personal story never rises above being a vehicle for the message, and has none of the humorous or poignant character development that made Love Actually so good. The majority of the interaction between the main characters is awkward and slow moving and when they inevitably get together late in the film it strains believability. But any concern for believability is totally thrown to the wind when Gina becomes a metaphor for the movement that is pushing the G8 to take action. Gina seems totally wooden through the first two reels, and when she becomes the voice of conscience at the summit it would initially seem to be totally out of character, however we really have no sense of her character. Even more inexplicable is Lawrence's repeated decision to keep bringing her to events where she has access to the G8 powers even after her first two ambush encounters with Lawrence's boss which play like assisted suicide for Lawrence's career.

You can't fault Curtis' motives here, and the message is presented in an informative way that never seems preachy or heavy-handed. It's just a shame that the rest of the story couldn't have been fleshed out with a little more of the screenwriting that Curtis is known for. Instead of a classic movie with a vital message, we are left with only a timely vehicle for said message; essential viewing for anyone who doesn't realize the scope of the problem, which is probably most folks, but not in a league, cinematically, with any of Curtis' prior efforts.

I was taken in by the love story and I was really hoping the couple would still be together at the end. While I agree with the political statement made here I thought it was a bit too preachy in the way it was handled and I found this to be the least interesting part of the film. A little more subtlety would have been better. I agree with you. Why would Lawrence keep bringing Gina to the events knowing she was going to mouth off. Not realistic!
7/18/2005

Anonymous said…
I've just watched this for the 4th time. It's now 2012 and I still love every moment of it. I have to disagree with the other two posts: for me it was all in character; why wooden't Gina be wooden, having just done time in prison for GBH? Why wouldn't she be as reserved as she was to start with having seen a child killed (probably her own)? And why wouldn't Lawrence continue to mismanage things? He's got a track record of not being able to handle the normal things of life (as he says himself) and by the end he's in love. Who doesn't behave irrationally when they are seriously in love? He's also old-fashioned and polite, and can't see how to stop her going to the dinner without offending her. He also agrees with what Gina says - after all she got it from him, so maybe his sub-conscious is at work too. When he says,'Why did you do it then?', she replies words to the effect, 'I took comfort in the thought that it was what you wanted, even though it wasn't what you wanted'. For me this is a brilliant piece of craftmanship by a supreme master, wonderfully witty and extremely amusing at times. It's that rare commodity perfect art, not for art's sake. I'd rate it even higher than David Hare's play Page Eight (which stars Bill Nighy in a slightly similar role, and I rate that very highly.
8/27/2012