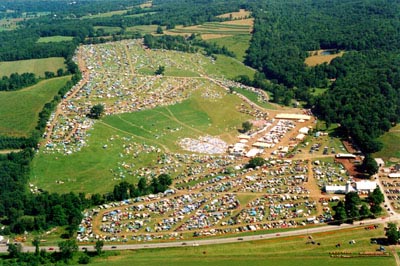 After several months of flip-flopping, a number of conflicting schedule priorities caused me to skip Falcon Ridge this year, but not without a good deal of second thought; and not a day went by this weekend that I didn't pause for a moment to think about what would be happening just then at the festival. Even if the performer list didn't quite pack the punch it did last year, that in and of itself would not have held me back.

The prospect of spending four days on a hillside of a beautiful farm near the New York-Massachussets border doing nothing but listening to music, catching up on some reading (but not too much sleep as memory serves) is enough to warrant attendance no matter the exact lineup. For the record though, I would not have missed sets by any of the following from this year's festival (in order of appearance on the main stage):

Kind of a surprise not to see Greg Brown on this list this year, he's the unofficial "governor" of Falcon Ridge. I'm already looking forward to 2006.