After detailed anyalysis of yesterday's rebroadcast of the Live 8 concerts on VH-1 and MTV, I can safely conclude two things: (1) MTV only utilized 75% of this rare chance for a do-over to redeem their abominable coverage of the live event, and (2) I've been way too consumed by all this, as you'll soon see. MTV billed yesterday's rebroadcast as "complete sets, uncut with no commercials" which was only partially true. Yes, the ten hours of music were presented commercial free, and yes, many of the sets were run uncut, but many sets were edited or not shown at all, while some sets ran twice.

In the most inexplicable programming decision since the original genius concept that people would care more about hearing the MTV veejays than the music, MTV ran many of the rebroadcast sets on both VH-1 and MTV. VH-1 aired the rebroadcast from 10am to 3pm and then it switched over to MTV from 3pm to 8pm. Both five hour shows were begun with a solemn speech by MTV News (MTV "News"?) announcer John Norris, who referred to the Live 8 event as "one of the most extraordinary events in the history of pop music and political and social activism." If only the folks in charge of programming these channels would listen to their own content.

He went on to describe the day as consisting of over 150 artists performing in 10 concerts on 5 continents. With all of that live concert performance to draw from, and only ten hours of airtime available to present the music, MTV wasted a good two and a half hours by running the same sets duplicated on both VH-1 MTV by the following artists:

What did they leave out in order to make room for two and a half hours of duplication?

Two and a half hours wasted out of ten hours available is 25% which is how I arrived at the above conclusion that MTV only redeemed themselves 75%. With all this great music to pick from, the choices would be difficult for any music person and I can't fathom how someone made the call to waste that much time with duplication.

Despite the glaring omissions, there was plenty to be happy about with the rebroadcast. First and foremost is the complete set by the reunited Pink Floyd.

It remains to be seen whether any bridges were really rebuilt after years of bad blood, but they sounded as great as they ever did on their four songs, David Gilmour's guitar work especially. We probably shouldn't read too much into this, especially with all the pre-concert reports that they still weren't speaking, even during the preparations, but Roger Waters, who was the absent member all these years described the reunion as "emotional" during the set, and we actually saw a group embrace at the end. 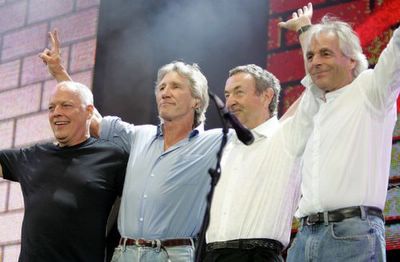 The U2 and Coldplay sets were nice to see complete. Will Smith was clearly getting the love from his hometown Philly crowd, it's mystifying why the one song by him they left out was "Summertime" the classic summer hit loaded with references to various Philadelphia locations. Bon Jovi may be bordering on self-parody these days, but the Philadelphia crowd was not above indulging a little 80's nostalgia. Annie Lennox sounded great, as did Keane. Madonna still seems to be the queen of pop on both sides of the Atlantic, Mariah Carey notwithstanding. Joss Stone was super soulful on her two songs. I'm not that familiar with Audioslave, but their lead guitarist was impressive and their set made me want to check them out.

The lead singer of Green Day looked kind of scary, and I could do without Velvet Revolver, Black Eyed Peas, Dave Matthews Band, R.E.M., Linkin Park & Jay-Z, Good Charlotte, and Robbie Williams (does he have even a fraction of his British following over here?). Obviously the goal in assembling an artist mix for an event like this is to hit as many constituencies as possible and they did a pretty good job of that with Live 8, even if the bill seemed to lean a little heavily on superstars who've had that title by their name for more than a couple of decades. You'd never know from the MTV broadcast that there were several country artists on the bill in Philadelphia and in Rome.

Sting was dead on with his songs selected for their lyrical context, starting with ""Message in a Bottle" followed by "Driven to Tears" and finally "Every Breath You Take" with customized lyrics relative to the G8 Summit ("we'll be watching you"). The final three sets from London, The Who, Pink Floyd, and Paul McCartney ended the day quite nicely (this combination would have been equally welcome thirty years ago). Too bad they couldn't find the time to air Stevie Wonder's complete set that closed the Philadelphia show.

It's been announced that EMI has purchased the DVD rights and that we will see a Live 8 DVD by November (at least we won't have to wait 19 years like with Live Aid). It remains to be seen what will be included, although I've heard that different versions will be produced for different countries. I guess it's foolish to hope for a complete set of every performance from every concert, but I'd buy it.