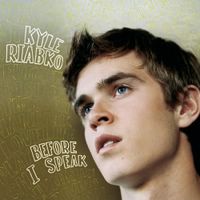 It's not much of a stretch to imagine the execs at Sony BMG reviewing sales figures for John Mayer (through the roof) and ringing up the folks at Aware with a directive to go find the next John Mayer. It's doubtful though that the majors are signing artists at high school talent shows, much less in the wilds of Saskatoon, Saskatchewan. After listening to Before I Speak it was somewhat of a shock to learn that this fully realized, full length major label debut cd was released this past April while Kyle Riabko was still finishing his senior year of high school in Saskatoon.

Riabko wrote all the songs, played most of the instruments and even co-produced the record which features a guest appearance by Robert Randolph. There's also a great sounding duet with Liz Phair, "Chemistry" and while the song is quite obviously about a relationship, he might just as well have been thinking about that fifth period science class when he wrote this. Word is that Riabko's junior year saw him touring with Mayer, Buddy Guy and Maroon 5 as well as recording this album.

As far as being the next John Mayer, Riabko's certainly got the look, but more importantly he's got the same triple threat ability to sing, play guitar (also bass and other instruments too), and write appealing songs. On a several of the songs, Riabko played all the instruments himself. The music on Before I Speak skews toward blue-eyed soul which sets him apart somewhat from his mentor. It remains to be seen if these songs will click with the mass audience that way that Mayer's have.

However, with well written songs, well sung, well played, and expertly produced, this is a most impressive debut, easily leaving Amos Lee's latest Blue Note full length in the dust. Somewhere in Philly, Mutlu must be saying "why not me." With a voice which sounds at least a generation older than his age, Riabko may be Canada's answer to Joss Stone, however the potential suggested by the quality of this debut suggests that Riabko may soon surpass all the artists to whom he is being compared.