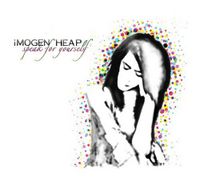 Many thanks to Dave from Sony BMG for not waiting for the November 1st release on one of his own labels, to preview by way of the import, Imogen Heap's second solo album, Speak for Yourself. Primed for the mass market by song placements in The O.C.

("Hide and Seek") and Garden State

("Let Go" by her band Frou Frou), this record offers up an intriguing combination of danceable fat beats flavored with occasional techno or even industrial sounds with some gorgeous multilayered vocals that give rise to Dave's labelling this "progressive pop." There's a lot more going on musically than in your typical pop record, but the multitracked and sometimes electronically processed vocals do have a sound that recalls the glory days of progressive rock. Since this music defies easy description, I'm going to reprint here the editiorial review of the import, from Amazon.com, written before she signed with RCA for U.S. release:

Whether partnered with Guy Sigsworth as Frou Frou, or on her own, Imogen Heap is an enormously gifted singer, songwriter, producer, keyboardist, and programmer. She does it all here on her second solo CD which showcases her remarkable talents. The stunning track 'Hide and Seek' offers the electronic equivalent of a cappella, with only Imogen's expressive voice heard via vocoder -- an early favorite that shot right to #1 on iTunes Electronic Chart in June 2005. The song was also featured on the season finale of THE O.C., and earlier in the season, THE O.C. previewed another track from this album called 'Goodnight and Go', a bittersweet ballad about the secret admiring of a neighbor.

Comparison's have been made to Bjork, Alanis Morrisette, Joni Mitchell and Annie Lennox, among others, but no one can hold a candle to Imogen Heap. Her electronic programming and keyboarding are so textured and layered, you will hear something new with each and every listening. Her canvas is cinematic, operatic, visionary, and always surprising with twists, turns, tangents and breaks that keep the listener on a journey of the unexpected. Whether evoking a hundred piece orchestra, an electric slide guitar, or a simple vocoder, Heap weaves her magic spell. As a lyricist, Heap has a wicked sense of humor, yet can drive a knife right through your heart when you least expect it. Don't miss out on one of the very best albums of the year. No domestic release date scheduled. Megaphonic. 2005.

The impulse to describe new music in terms of familiar reference points is strong, but in this case there's nothing quite like it to compare to. A good starting point, as suggested by Dave, is the video section of her website. Go to "solo videos" and check out "Hide and Seek" the song used on The O.C., a beautiful piece of acapella singing through the vocoder. A word of warning however, the Windows media player will start this video over again when it ends and if you stay through it more than twice, you may not be able to summon the will to turn it off; I normally detest repetition of music but I let it repeat play for a good hour and a half. Dave had a similar experience. Immi, as her fans call her, has been on a U.S. tour since early September, stopping at the Canal Room in New York this Sunday, and I'm looking forward to it.

Wednesday 10/26 update - Imogen was on Morning Becomes Eclectic today on KCRW and you can watch and/or listen to her live performance and interview with Nic Harcourt here. 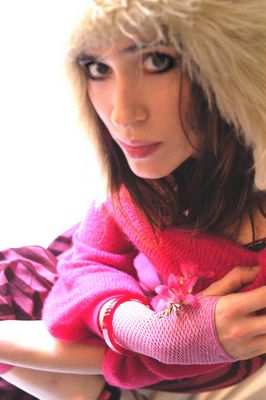 koeeoaddi said…
Synchronicity. My radio station, KMTT (The Mountain) just had their "New Music Throwdown" where they pit two new songs against each other and people call and email in with their opinions and vote for best song. This week it was deSoL with the song "Blanco y Negro" -- against Imogen Heap's "Hide and Seek." deSol won, but the majority of opinion was that it was impossible to decide because they were both so abysmal.

I have no opinion since I missed both songs and tuned in just in time to hear the horrified sputtering of listener after listener saying "God, I can't decide which one sucked donkeys more, the bubble gum thing or the dirge." "That second one sounded like a church organ someone left in the attic for 30 years -- never, EVER play that thing again!" and, finally, a simple and poignant, "Dude?!"

So now I'm going to have to listen and decide for myself. Thanks a lot. :-)

P.S. On the other hand, since my favorite band has been compared more than once to dying cows, I'll probably love Ms. Heap.
10/25/2005

William Kates said…
Music as unusual as this, is probably fair game for potshots, but having listened to the KMTT Live from the Music Lounge cds, I would've thought their listenership would be a little more open minded.
10/26/2005

koeeoaddi said…
Having heard the song now, in the quiet of my office, I thought it was beautiful, albeit decidedly strange. Stuck in traffic with the rest of my drive time KMTT listener pals, I admit I might have had an initial WTF reaction, myself. The song demands your full attention.

I shudder to think what the listenership would do to "Chinese White" by the Incredible String Band, on one of those throwdown shows.

Anonymous said…
Imogen Heap may end up being to the next 10 years what David Bowie was to the 1970s. She's that good. Her music is literally addictive. Frou Frou was great, but the new album is even better - I bought two so I could spare myself the trouble of carrying it back and forth from my car to the house! I haven't seen it in the stores yet, but if you do, JUST BUY IT. You'll thank me later.
11/05/2005

William Kates said…
Jeff - I'm right there with you on on the addictive part. I started listening to the import of Speak for Yourself about a month ago, and it's reached the point where I feel compelled to start this disc up again every time it ends, and I never normally listen to anything repetitively. It is that good. Thanks for your comment.
11/05/2005