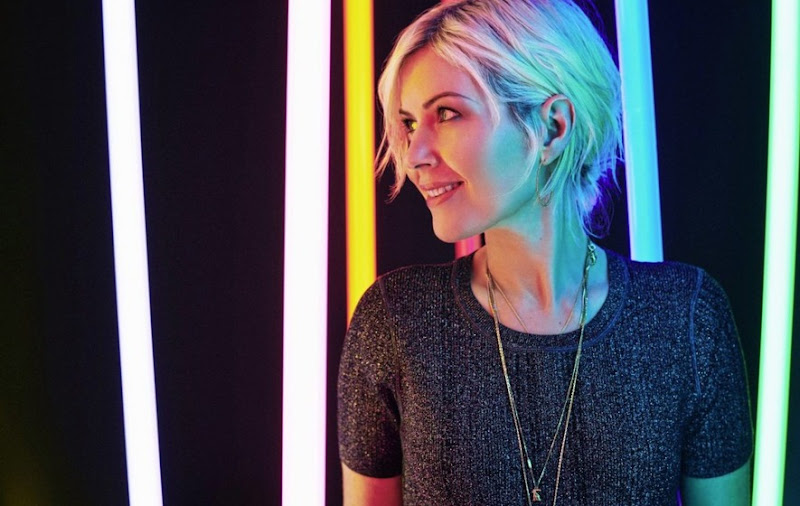 Dido played Philadelphia's Union Transfer Saturday night, June 22nd and offered her usual masterful performance. Although she played the much larger Tower Theater the last time through, Dido reportedly opted for smaller venues this tour. Perhaps because it had been fifteen years since she last toured here, she wanted the intimacy of smaller houses. When the show was first announced last winter, it sold out immediately.

The upshot of all this was that the fans secured their tickets early, and I did likewise when the show was announced back in January. And so, the multi-generational crowd was missing the component that you usually get at a weekend show, the folks that just want to go out on a Saturday night. That's the sort of crowd that talks continuously through the show; venues generally deal with that by running the sound at a bludgeoningly loud level.

The sound mix was superb. Every instrument was well defined, even when loud, yet there was always room in the mix for Dido's voice. At full tilt this band could rock out gracefully with the excellent drum sound of Adam Falkner augmented by Jimmy Sims' ballistic bass guitar and by propulsive percussion played by Jody Linscott, reprising her role from Dido's last tour in 2004. Switching between piano and other keyboards was Jamie Norton. Guitarist Pete Rinaldi played some really tasty electric leads when he wasn't accompanying Dido's voice on acoustic.

Dido's twenty song set was well proportioned from her five studio albums, with most of the selections coming either from her new album or the first two. When she documented her first two albums with the Live at Brixton Academy DVD/CD, I found those live recordings to be the definitive versions of those songs. Although I usually consider studio albums versions to be definitive, Dido's live renditions at Brixton were so much more powerful.

Fifteen years on, the excellence of Dido's live performance continues. When a concert stays with you after it's over, and for the next week or so you are recalling songs from her set, you know you've been to a good one. 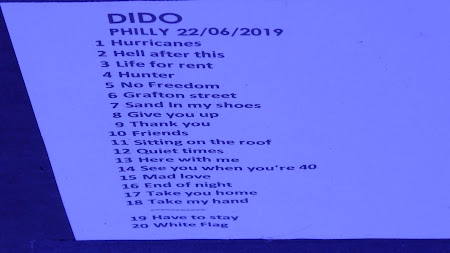 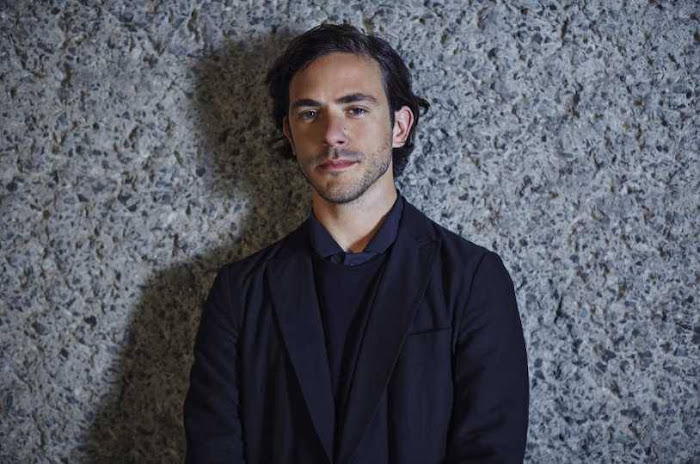 Jack Savoretti opened the show thanking Dido for giving him the opportunity to tour with her. Although he talked about this being his first time visiting Philadelphia, Washington D.C., etc., his latest album Singing To Strangers is his sixth.

In the UK, Savoretti generally headlines and has sold out some major venues in the London area. Singing To Strangers represents his first time reaching #1 on the British album charts. He has a good band and a voice that when energized sounds a bit like Joe Cocker.

Watch Jack Savoretti explain the significance of the title, Singing To Strangers.


Setlist: Click on linked songs to listen
01 Home
02 Other Side
03 Better Off
04 Singing To Strangers
05 Candlelight
06 When We Were Lovers

Posted by William Kates at 8:55 PM No comments:

The Japanese House - The Foundry, Philadelphia, 5/26/2019, The Foundry Crowd Gave Amber Bain the Old Philadelphia Welcome; Art School Girlfriend Opened With Polly Mackey's Songcraft with a Side of Electronics 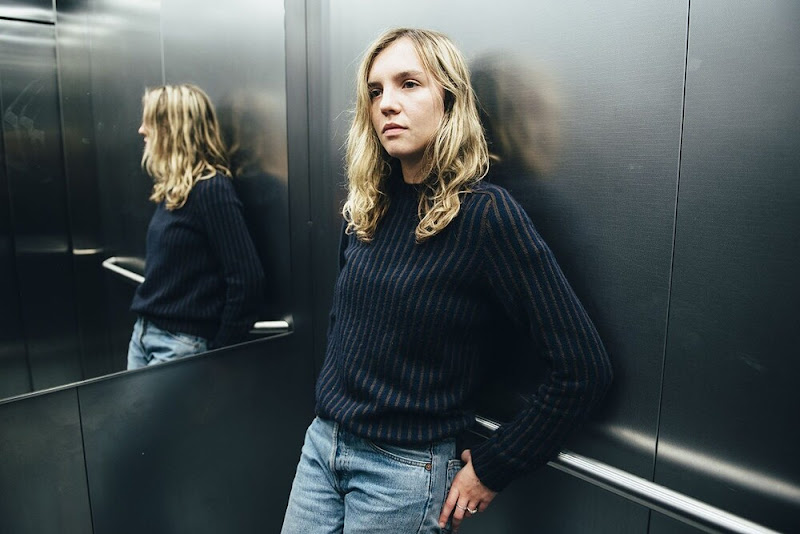 Photo: Courtesy of The Japanese House

The Japanese House played The Foundry reportedly for the fourth time, on Sunday night, May 26th. The Foundry is located inside the Fillmore in the Fishtown section of Philadelphia. The Japanese House is essentially Amber Bain, a musician, singer, and songwriter from England. Judging by the reception she got from the sold out Foundry, the crowd reaction sounded much louder than the venue's capacity of 450.

The crowd sang along throughout the set, and not just when asked. I was imagining that this must be what her performances might be like at home; at least we made her feel welcome here in Philadelphia. Home (away from home) is the place, incidentally, that was the source of the name. As the story goes, when Bain was young, her family went on holiday and stayed in Kate Winslet's house, which was called The Japanese House.

The Japanese House first caught my ear when I heard a single included in one of Lee Bennett's excellent playlists associated with his blog Teases and Dares. The promise of that single was more than realized when The Japanese House released their first full length album, Good At Falling, earlier this year after four solid EPs. The songwriting was exceptional and the execution was superb. At times, the album reminds of Imogen Heap's breakthrough record, Speak For Yourself, while being totally original and highly personal.

The set contained a nice mix of most of the new album along with some well chosen prior tunes. The crowd loved every one of them. There was a nifty cover version of Fleetwood Mac's "Dreams" contained within Bain's own composition "Saw You In A Dream"; nice.

As a full band, The Japanese House sounded phenomenal. Bain handled the lead vocals and played electric guitar throughout. The rhythm section, when it kicked in, sounded like the bass and drums were so in sync it was mind blowing, as you can hear in the videos below. The band also included a keyboard player who contributed some background vocals and duetted with Bain as well. 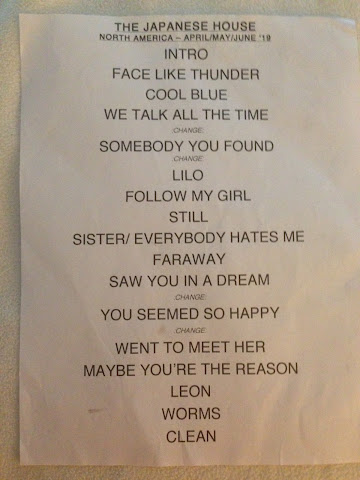 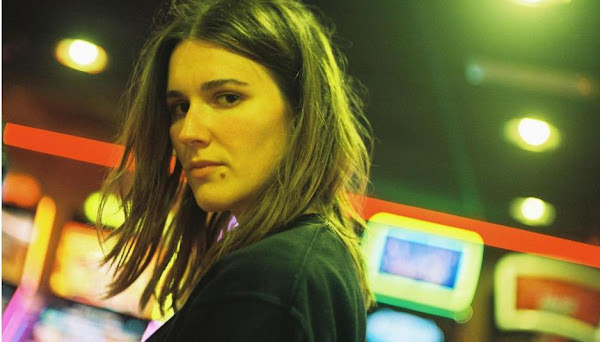 Art School Girlfriend is the group name used by Polly Mackey, an electronic musician, singer, and songwriter. She is currently touring with The Japanese House, another instance of pairing artists who have significant potential to appeal to each other's audience.

Mackay possesses a terrific voice. At The Foundry she played guitar and also controlled the electronics using a rig that included a laptop computer. The full sound of Art School Girlfriend was the result of her remarkable solo performance.

Art School Girlfriend has released two EPs and a number of singles. She opened with "Bending Back", which came from her debut EP Measures (2017). There were two songs, "Low" and "Distance (Blank)" from her second and latest EP Into the Blue Hour (2018). Her set included two recent singles from this year, "Come Back To Me" and "Diving", and she did one composition "Eyes On You" that has yet to be released. According to Mackay, it will likely be on her next record, in 2020.

Seeing Art School Girlfriend open for The Japanese House at The Foundry was an unexpected treat.