Showing posts from March, 2007
Show all 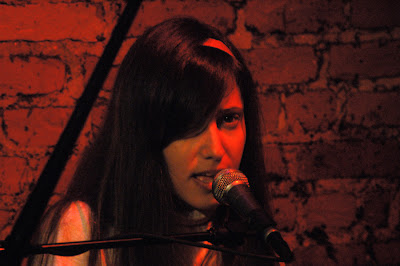 After months of hearing good things about Elizabeth & the Catapult, the calendar finally aligned for a spin to New York to catch her Rockwood show last night. As good she sounds on her 2005 EP, her live set was all that and more. Elizabeth opened with a beautiful cover of "Spanish Harlem" starting solo on piano with the band gradually joining in. Her set primarily consisted of originals, some from the EP, some newer compositions, along with some very nice covers. Her band sounded great, bass (both electric and upright), guitar (electric and acoustic), violin, and drums. The guitarist doubled on melodica, as did Elizabeth who emerged from behind the piano to also play a few songs on acoustic guitar. In addition to the great sounding originals, she unleashed a dynamite version of the Beatles' "I'm So Tired". Later she brought up two members of a group called Old Springs Pike to harmonize with her on a sweet sounding version of Crosby, Stills & Nash'
Post a Comment
Read more
More posts