Showing posts from February, 2022
Show all

Oz Noy/Ray Marchica/Ugonna Okegwo - Riverside (Outside in Music, 2022); Three Master Musicians Jazz Up The Standards During the Pandemic at Riverside Park, NYC 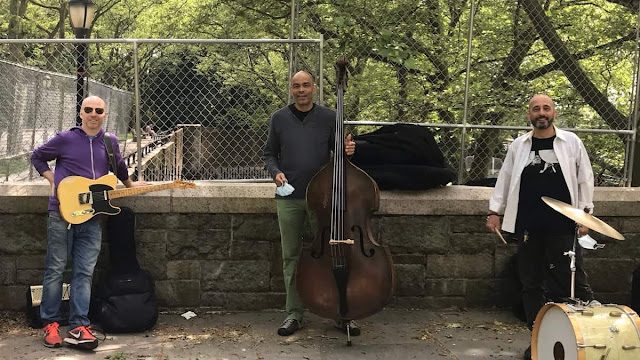 All Photos Courtesy of Oz Noy/ Ugonna Okegwo/Ray Marchica  Trio If only I had known then what I know now... In the first decade of this millennium, I was privileged to see a lot of live music in NYC. I'm still kicking myself for not seeing fabled guitarist Oz Noy when I had the chance. I knew by reputation that he was an incredible guitar player. What I didn't know, unfortunately, was the type of music he played or that he was the tasteful player that he is.  I didn't know that Noy was an accomplished player in his native Israel and that he played on Israel's most popular television show for two years before moving to NYC in the mid-nineties. I also didn't know that he plays at The Bitter End every Monday when he is in town and that his rhythm section often consisted of Will Lee on bass and Anton Fig on drums; both members of the David Letterman Show band. I was already familiar with Lee from his many endeavors, not the least of which were frequent gigs with guitari
Post a Comment
Read more
More posts