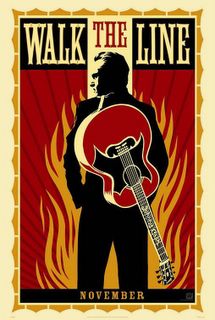 All the four star reviews are well deserved by Walk the Line, skillfully directed by James Mangold. For those who want something more than the stereotypical celebrity biopic, there's the great love story of Johnny Cash and June Carter, but what really puts this movie over the top is the masterful job T-Bone Burnett did with the music.

Although Johnny Cash had a lengthy and accomplished career and can easily fill a boxed set with his best songs, song selection for a movie like this is hardly easy. Burnett deftly avoids every possible pitfall in his handling of the music in Walk the Line. He left out anything that might seem cliched, including "A Boy Named Sue" which introduced a whole new generation of pop audiences to Cash in the sixties, and "Man in Black" where Johnny explains why he always wore black, just to name two somewhat surprising omissions; even still the song selection is just perfect. 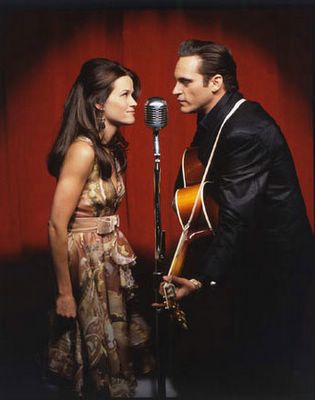 The production of the music is just right too, with the most amazing part being that the two lead actors that are totally credible singing their own parts. Burnett's had a respectable career as a singer songwriter, but he's really disinguished himself as a producer, and since he's extended his production projects to films, his work has been nothing short of genius. Starting with his first album as producer, the excellent Leo Kottke album Time Step (1983), he racked up production credits with Los Lobos, Marshall Crenshaw, Elvis Costello, Roy Orbison (the classic Black and White Night video), Bruce Cockburn, including his great Nothing But a Burning Light (1991), Counting Crows, the Wallflowers, Jackson Browne, and the awesome collaboration of k.d. lang and Tony Bennett on What a Wonderful World (2002), just to name a few career highlights. 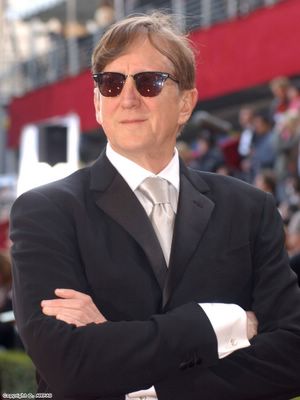 Burnett moved into film soundtrack production in 1985 and now has a list of soundtrack credits almost as long as his music production list. His film work has had a great impact to the point that his soundtrack for O Brother Where Art Thou (2000) singlehandedly revived the traditional American folk music genre and ultimately paved the way for new audiences to discover many great artists. Burnett worked similar magic on the Cold Mountain (2003) soundtrack. In Walk the Line, the music is an integral part of the story, and from the recreation of Johnny's 1957 audition with Sun Records owner Sam Phillips, to the Folsom Prison concert that bookends the movie, Burnett gets it right in every scene. 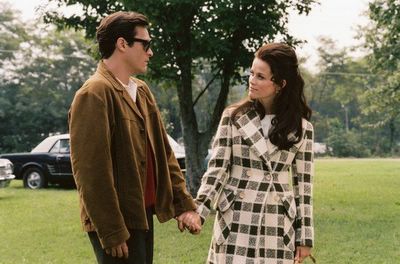 The degree to which Joachin Phoenix and Reese Witherspoon disappear into their roles is uncanny, as is their ability to sing their parts with complete credibility; equal credit for that goes both to the actors and to the many months of rehearsal and coaching by T-Bone Burnett. Phoenix positively channels Johnny Cash, much in the same way that Jamie Foxx became Ray Charles in Ray (2004). Reese Witherspoon has been good in movies before, but here she turns in easily the best piece of acting in her career. Both lead performances are totally Oscar-worthy. 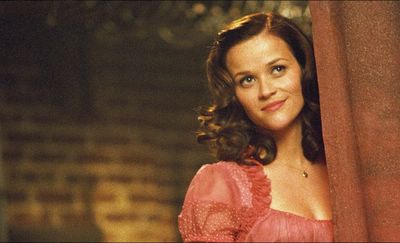 Certain elements of the story are prototypical of such biopic stories, the rise to fame, the cheating, the drinking, the pill-popping, etc. but the relationship between Johnny and June easily transcends the stock plot. Since we know that they ultimately had a marriage that lasted for thirty-five years until they both passed away in 2003 within a few months of each other, the lengthy period during which Johnny was married to someone else as they gradually fell for each other, creates suspense not so much for whether they will get together, but more for the when, why and how. 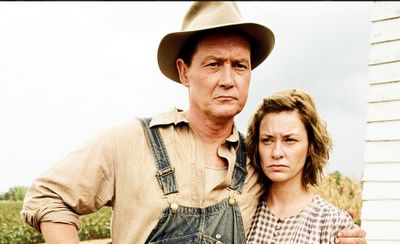 Walk the Line does a good job analyzing the motivations that drove Cash not only to excel at music but to self-destruct at the same time. At the core of Johnny's angst (according to the movie) was the childhood accidental death of his brother and the psychological brutality of his father which continued seemingly all through his life. All the suppressed anger and frustration finds its way out through the music and on stage in his concert performances.

The supporting cast is uniformly excellent, including Robert Patrick (Terminator 2, 1991 and the television series The X Files, 2000-2002) and singer-songwriter Shelby Lynne as Johnny's parents, and Ginnifer Goodwin, (Mona Lisa Smile, 2003, and the television series Ed, 2001-2004) who turns in a great performance as Johnny's first wife, Vivian. In a nice casting move, Waylon Jennings is played by Jennings' real life son, Shooter Jennings. Dallas Roberts also plays a very believable Sam Phillips. You might think that if you've seen one musical biopic you've seen them all, but you'll rarely see one as well done and as musically satisfying as Walk the Line. 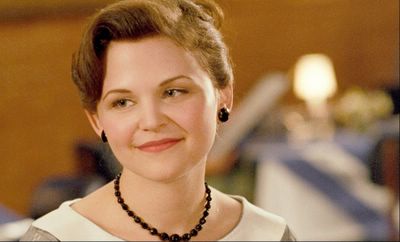