"And We Danced" (picture sleeve above) was released in 1985 as the second single from the album, Nervous Night, the Hooters' major label debut for Columbia Records. Here's the video.

The call went out to the Hooters' mailing list the last week of July 1985 that an audience with cars would be needed on the coming Saturday for a video shoot. Participants would report to the Exton Drive-In by late morning and be prepared to stay all day until after dark. 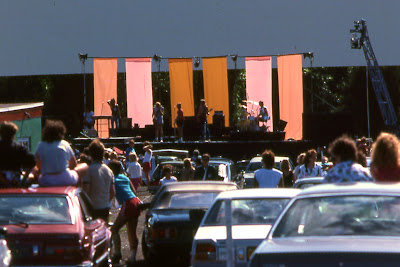 This stage set, early in the day, was a warm-up for the crowd and probably a dry run for the production team for the night-time performance to be filmed later. The banner backdrop does not appear in the video. 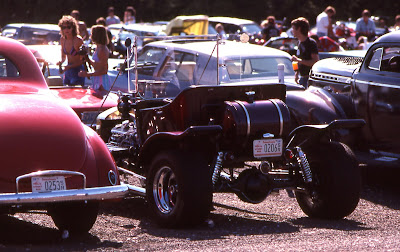 Some of the antique and custom cars that were on hand for the shoot. 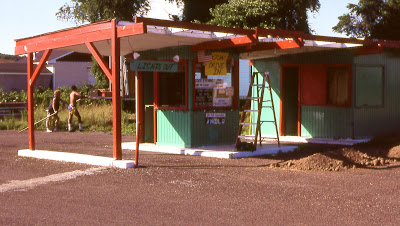 The production crew prepares the ticket booth for its shot. 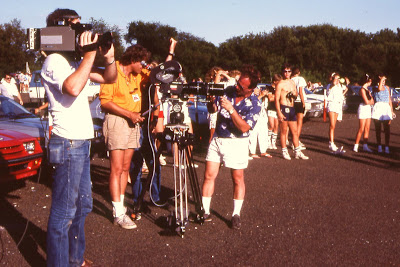 This is the film crew shooting the acoustic intro part of the song. 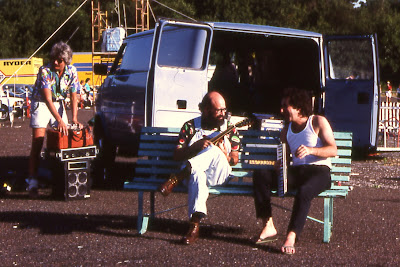 The acoustic intro was shot twice, first with the guys above playing Eric Bazilian and Rob Hyman; this shot appears at the beginning of the song in the video. 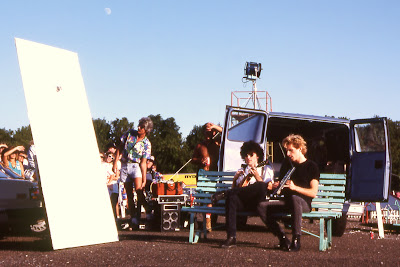 The second shot of the same sequence features Rob and Eric (above), and this shot appears at the end of the video, projected up on the drive-in movie screen. The significance of having two other guys appear as Rob and Eric has always eluded me (perhaps they represent Rob and Eric at an older age?), so if you know or think you know the meaning, please post a comment. 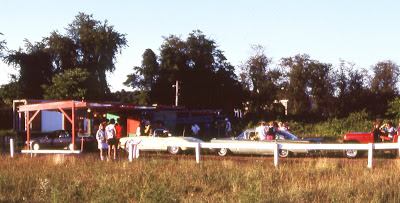 Cars line up for the ticket booth shot. Pierre Robert (tie dyed shirt) of WMMR hangs with the folks. He can be seen in the video during the concession stand sequence. Pierre has been perhaps the Hooters' staunchest supporter in local radio throughout the Hooters' career. Although Michael Tearson is widely regarded as being the first to play the Hooters on WMMR ("Man in the Street", 1980), WIOQ also played the Hooters early and often, giving their first independent single, "Fightin' on the same Side" (1981) plenty of airtime. The live demo "Man in the Street" that was first given to Tearson on cassette, was included as a bonus track on the CD reissue of Amore, the Hooters first, independently released album (1983) which contains eight classic Hooters compositions in their original arrangements. 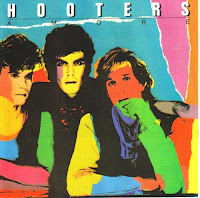 The Hooters - Man in the Street, bonus track from Amore CD Reissue (2001). After a lengthy hiatus, the Hooters reunited for a one off concert performance in November of 2001 at the Spectrum to help celebrate Pierre's 20th anniversary on WMMR. This performance led directly to several summer tours of Germany where the Hooters still reign as superstars, beginning in 2003. After a pricey benefit performance at World Cafe Live in late 2005 which was broadcast live on WXPN, the hometown audience finally got their first real Hooters concert in over a decade at the Electric Factory in the summer of 2006. Later this year, the long anticipated reunion of the Hooters will become complete with the release of Time Stand Still, the first new Hooters record since 1993. You can listen to some songs from the new album now on the Hooters' myspace player. 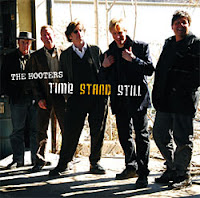 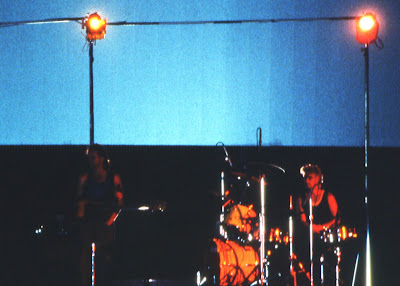 Finally, darkness and the filming of the performance part of the video. Above is Dave Uosikkinen on drums. 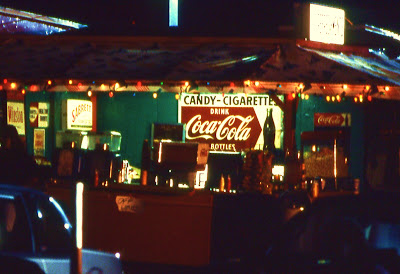 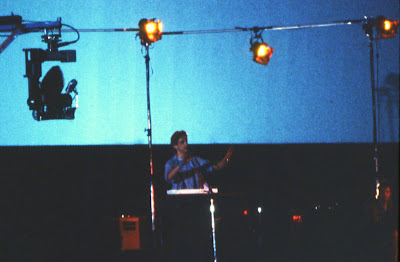 Rob Hyman on keyboards and vocals. It may be hard to believe now after so many years absent from the local live music scene, but at one time the Hooters were perhaps the most accessible of all the great bands and artists to emerge from Philadelphia and make it big. Throughout the early 80's they played often at small clubs like the 23 East Cabaret, the Ambler Cabaret, and the Chestnut Cabaret which as memory serves, were all owned or operated by Steve Mountain who still manages the Hooters through his company, Cornerstone Management. The club shows were distinctively different from the more formal concert hall sets, with each song kicking in hard on the heels of the previous song, building an energy level that was white hot. The combination of ska, reggae, and rock was compelling in their original songs (many great tunes from those days have still never been released) and the occasional well chosen cover songs were a similar delight. One club show in particular stands out as one of the best live shows I've ever been privileged to experience and that was when the Hooters played the Ripley Music Hall (prior to its conversion to Tower Records) on South Street. The show was a special anniversary celebration of some sort for the band and they brought a ska horn section to perform with them. Their version of "Wireless" that night was the most electrifying performance ever of this great song. "Wireless" has never had a CD release, in fact it's only ever been available as the b-side of the original "Fightin' on the Same Side" single. On the picture sleeve below, they dedicate the tune to the memory of Bob Marley. Have a listen. The Hooters - Wireless (B-Side of "Fightin' on the Same Side" single, 1981) 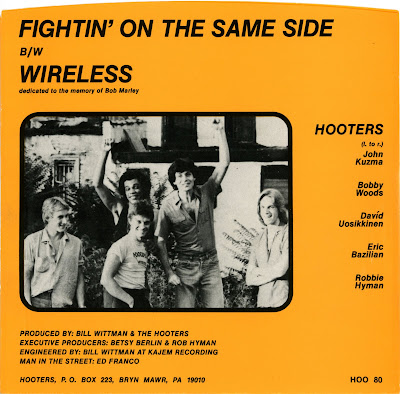 After dusting off the old turntable, installing a new cartridge and firing it up for the first time in what seems like 20 years to capture that single b-side, listening to "Wireless" brought me back instantly to why the Hooters' club shows were so different from their concerts. This is music that demands the audience stand up and move to it. Sitting down in a seat for music like this is not an option. Even listening to it now it's impossible to stand still during "Wireless". For all the success Rob and Eric have rightfully achieved as songwriters, producers, guest musicians, guest vocalists, and hit doctors, their ability to truly move an audience with their songs and their stage performance will always seem to me to be their greatest gift. To complete the picture, here are a few bonus pics from the same time period as the video shoot. These were taken at the 23 East in Ardmore, August 10, 1985. Rock steady, indeed. 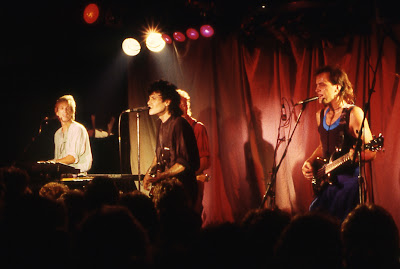 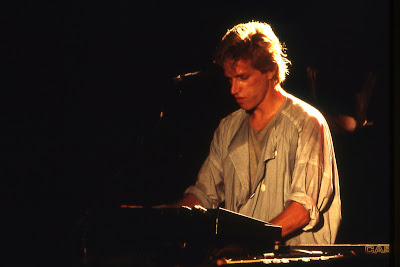 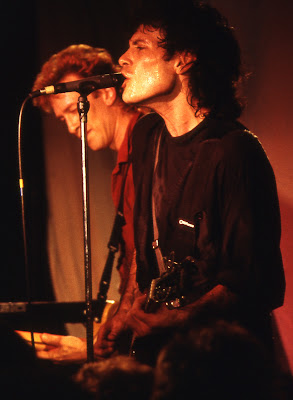 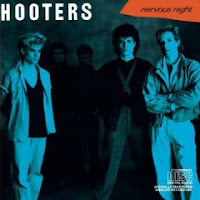 Unknown said…
Great entry! However, I feel the need to point out a small error. There actually was another Hooters show between Pierre's birthday and the World Cafe Live show. They played a set before Chuck Berry at a festival at Penn's Landing. I don't recall the year off the top of my head, but the set was about 75 minutes long.
8/31/2007

Unknown said…
They Played at Jam on the River in 2003. That's where I met Pierre Robert, and Lauren Hart (sp?)

Great entry! I must say that I loved seeing some of the older Hooters pictures, being a younger Hooters fan (I'm only 25)I didn't get to experience a lot of the Hooters in their prime.

Unknown said…
cool pictures! I was there at the drive-in and thanks for bringing back many fond memories. I had forgotten how it was an all-day, all night thing. I remember hearing the intro about 200 times that night, and I still love it
5/26/2010

Anonymous said…
The answer to the comment of 1/11/2012 is YES! I actually got to hang out with the guys often, as I worked at Glasrock Home Health Care which was 21 East Lancaster Ave...Right next door to the 23 East! They signed my copy of Nervous Night right before they headed out on their Australian tour. Saw them outside, ran home to get my album, ran back to work and they all signed off for me! Still have it all these years later! Still love their tunes! Many great memories of hanging out at the 23 East!
7/20/2012

Anonymous said…
Thanks for the great memories - I was teaching at Drexel at the time. I answered the call and am somewhere in the crowd for that video. It was a fun day mingling with everyone - I remember guys in the band playing hacky sack between takes. I still have the pass stuck to the album cover.
3/29/2013