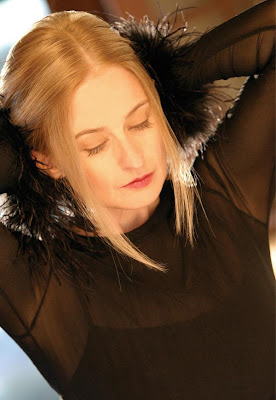 Julia Fordham's long awaited jazz album, China Blue (her tenth), is finished with release imminent on a new download site called Novatunes and is also slated for sale at iTunes and CD Baby among other online retailers.

The album was produced by Grant Mitchell; the title track is a new version of a tune that was originally on the U.K. version of her classic Porcelain

album (1989). "For You Only For You" is also a re-do of another great track from Porcelain.

Rather than be the 999th artist to do an album of jazz standards, Julia elected to go with originals, including only one cover, "I Keep Forgettin'", the Michael McDonald song. When McDonald heard this version, he liked it so much that he volunteered his own distinctive voice on background vocals.

Here's the tracklist:
"Funny Guy" was first heard as a bonus track on Concrete Love

(2002), which Julia described at the time as indicative of her desire to record a jazz album. It seems that the actual release is waiting for Novatunes to launch (planned for end of November), but in the meantime you can check out two of the new songs including the title track at Julia's myspace page. Photo courtesy Julia Fordham.