December 17, 2007
The following article was written by John Fogerty for the December 3rd issue of Newsweek. His description of his career and personal life is too good to rely on the impermanence of a link, so the full text is reproduced here, courtesy of Newsweek and the author.

After Creedence broke up, the musician spent years searching for his own sound. With love, he found it. 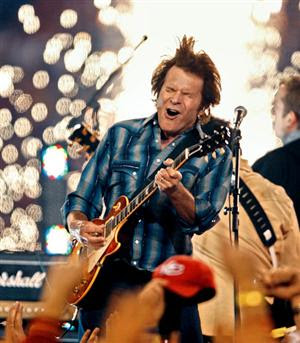 My new album, "Revival,"comes by its title naturally—a return to making the kind of music I became known for early in my career. I get a real feeling of being back where I belong. But I didn't just decide to do that. I was in need of another kind of revival before that music could be created.

Twenty-one years ago I was a castaway—a drifter, floating along with the stream. Not plotting a course or even aiming for a destination point. I was filled with anger and hurt and at the same time, weirdly subdued; depressed. Just a year earlier I'd released a No. 1 solo album to wildly enthusiastic acclaim. How did things get so bad?

It began back in the early '70s. After leading my band Creedence Clearwater Revival through the most amazing three years that any band has ever had, the group collapsed, and disintegrated with a rather frightening level of jealousy and betrayal. I spent much of the next 30 years in litigation, battling with my record label, music publisher and former bandmates to protect the artistic integrity of my music and my financial rights to what I'd created. By the mid-1980s the emotional and financial toll of fighting these battles for so long came to a head. One day I was giving yet another deposition and found myself so angry that I couldn't remember my own address or telephone number! I remember going into a department store and being so fearful and dysfunctional that I could not ask a salesperson about buying a pair of socks. I couldn't sleep. I couldn't feel. Music was who I was and I could not understand why or how I could lose so much.

But everything changed one night in September 1986. I was on tour in Indianapolis. I'd wandered into a club near the hotel. After about 15 minutes, I had decided to leave, but suddenly the shadows parted. There she was. I actually said to myself, "That's the most beautiful girl I have ever seen." Her name was Julie. It was extremely lucky that we met at all. Julie was helping her sister move across the state and they had stopped in Indy for a break. They were just about to leave. Fifteen minutes—either way—and we would never have met.

We fell in love. Let me say that again. We fell in love. To me there is no more meaningful occurrence in this life. Though I had been married once before, in Julie I experienced what happens when another person becomes more important than one's self. I learned the concept of sharing—that's a big one. My psyche at the time was in such bad shape. I was a self-destructive mess. But in Julie I had total acceptance, something I'd never felt. She became my wife, my love, my best friend. Finally, my heart began healing. Meeting Julie opened that path.

Steeped in anger and hurt, I'd chosen not to play any Creedence Clearwater Revival songs—no "Fortunate Son," no "Bad Moon Rising," no "Born on the Bayou"—since 1972. But in 1987, less than a year after meeting Julie, I played them again for the first time at a concert in Washington, D.C., for Vietnam Veterans. It felt good. But you don't just snap your fingers and everything gets better. For a few years after that, whenever Creedence music would come on the radio, I still had to change the channel. I wouldn't pick up a guitar.

Slowly, with Julie's loving guidance, I began to move beyond the bitterness I'd carried for so long. It was five years later that she came into the house one day and saw that I was playing again. She says it was one of the happiest moments of her life. Thanks to her encouragement, I was rediscovering my voice as a songwriter. Over the years I had been sued for allegedly writing songs as a solo artist that sounded too much like the music I'd written for Creedence—for plagiarizing myself, as it's been described. I successfully defended myself in those suits. But whenever I'd sit down to write a song and it got anywhere near to sounding like Creedence, a little gremlin would pop up on my shoulder in the form of a lawyer saying "Don't do that." One day I said to the gremlin, "Get out of my life. I own this. I sound like this. I'm embracing this." I finally was able to put that to rest and become comfortable again with my sound.

It is fitting that it was Julie who came up with the title of my new album, "Revival." There's a song on it called "Broken Down Cowboy." As I was sitting down to write one day, the line came out of nowhere: "A broken-down cowboy like me." I realized I was writing about myself. That broken-down guy is someone I was a long time ago. When you're in the middle of so much pain, you're just trying to keep from drowning. Now there is enough perspective to write about it. Today I am 62 years old and Julie is 47. We have been together for two decades and have four children. To think that had Julie and I not met on that night so long ago, I could have missed all this. No way. I have my music and my family. I'm the luckiest man in the world! So when you ask about the revival of John Fogerty, it's really a celebration, a gift, the return of the real me. Article and photo © 2007 Newsweek, Inc. 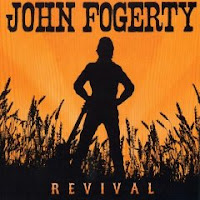 Charlie Ricci said…
I always loved both Fogerty and CCR. It's nice he found love and revitalized his career. Proof that not all rock n' rollers lives end poorly. Thanks for posting this.
12/31/2007