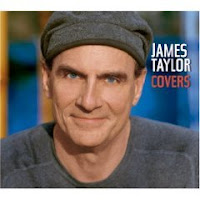 One of James Taylor's greatest strengths is his uncanny ability to do cover versions in a way that both retains the quality of the original composition but at the same time make it sound totally like a James Taylor song. There are many instances of this over the course of his career, "Handyman" is a classic example. His next album will be all cover versions, the cleverly titled CD, Covers

will be released on September 30th on Starbucks' Hear Music label. James describes the album thusly on Amazon where the album is already available for preorder.

I've done covers of other people's songs since the beginning. Looking over the various collections of my tunes a fair-sized portion of my "hits" have been covers: "You've Got a Friend", "How Sweet it Is", "Up On the Roof", "Handyman"...so this is not uncharted water for me. I've always thought that writing an original song and reinterpreting someone else's were similar processes; just as making music is a lot like listening to it.

What has been so memorable about this album were the sessions themselves: ten days in deep January in a converted barn in the woods of Western Massachusetts. It's remarkable and unusual today to put 12 musicians in the same place at the same time. It's a type of "live" recording sadly seldom seen in these days of the overdub. You get an immediate energy and it's a whole lot of fun. It sweeps you up and it carries you along and when it's done, it's done.

Charlie Ricci said…
I'm very interested in hearing this. I agree. JT is one of the best at covering other artist's songs even though many credit him with popularizing the whole singer-songwriter genre.
9/10/2008