Melody Gardot - My One and Only Thrill, Set for Spring Release 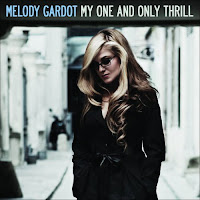 Listen to "Baby I'm a Fool" from the new album.


Melody Gardot's second full length album, produced by Larry Klein and much anticipated since she signed with Verve about a year and a half ago, is set for release this spring. The cover and track list are up on the Amazon sites in the U.S. and U.K. where the album can now be pre-ordered. "Baby I'm a Fool" is already out in the U.K. as a single & EP, and Melody put the song (above) up on her myspace player to give the rest of the world a preview listen. The listings show an extra track on the U.K. release, the last song, "Where Do I Begin".

Click over to Melody's UK website for a nice ten minute video on the making of the record, with lots of the music to hear, interview with Melody, and shots of her in the studio while recording.

Here is a three part conversation between Melody and producer Larry Klein about making the album, from the Sundance Channel's Inspiration Sessions. The content here is well worth sitting through the ad three times.

Melody's been doing "Baby I'm a Fool" live for some time now, it knocked me out the first time I heard her sing it at Rockwood; on "Les Etoiles" she sounds awesome singing in French, and her solo take on "Somewhere Over the Rainbow" always kills. Here are two songs recorded live for XM's The Loft program in June, 2007.


The track list on Amazon UK includes personnel for each track (names only) which reveals that in addition to Melody and her band (Ken Pendergast, Charlie Patierno, Bryan Rogers, and Patrick Hughes), producer Larry Klein plays on almost every track along with a core group of additional players and some beautifully arranged strings. "Where Do I Begin" is listed as just Melody solo.

The My One and Only Thrill EP which leads with "Baby I'm a Fool" is already out on iTunes UK, and even though we can't buy it from the United States, you can listen to the thirty second samples from two more incredibly gorgeous songs from the album, all beautifully arranged with strings and Melody's amazing voice. The fourth track on the EP is "High Night" which is a duet with Till Brönner from his Latin jazz album Rio, also produced by Larry Klein, which was released in September 2008 in the U.K., but is also not available here.

Anonymous said…
This album really impressed me .. I didn't think she could top herself .. but this album lyrically musically is brilliant. I love her voice soo soothing. My favorite track is Our love is easy .. whats your favorite track ?
4/29/2009

Danyelle said…
The bonus track on the UK album doesn't seem to exist. Is it a hidden track or has it been replaced?
5/15/2009

William Kates said…
Good catch Danyelle. The tracks as listed in last December's press changed between then and release. The bonus track on both the U.S. and U.K. editions of the album is "If the Stars Were Mine (Orchestral Version)". There is no sign of "Where Do I Begin", perhaps it is being held in reserve for a future EP bonus track. I haven't detected that it's a hidden track anywhere. There is an additional bonus track on the U.S. iTunes edition of the album, "Pretend I Don't Exist", you must purchase the entire album on iTunes to get this track. There is also a new six song live EP, Live from Soho, available at iTunes, both U.S. and U.K. When she played recently at Rockwood Music Hall in NYC, a nice midnight set on U.S. release day, 4/28/09, she did do a song that she described as a bonus track, I will check further, and I will post an article soon about that RW show, perhaps with some video, keep checking back.
5/15/2009

Danyelle said…
OK now you've said that I'll order my cd from play.com (I already got Melody's new album the day it came out on itunes but for those really great albums I always buy the physical also). I'm in the UK but a friend sent me the bonus track "Pretend I Don't Exist". I really like it. I'm not bowled over by the orchestral version of "If the stars were mine" - maybe because I really like the original. The orchestra doesn't gel for me at all on that one. I guess I generally prefer stripped down stuff. On youtube I discovered "Wade in the Water" by Melody. Very nice. I also love the "Ain't No Sunshine" she does live - hoping it turns up as a bonus track somewhere..... Is it just me or does she just come alive when live. Just a bit more soul in it somehow. I love that. Saw her on Graham Norton earlier this year (in fact I recorded it) and I also have her Jools Holland performances from last year. Brilliant stuff. O and yes thanks for mentioning the Soho EP - I got that from itunes but tbh I am disappointed that they didn't shield her mic somewhat. It's really good but the "ffff" on "fool" gets really distracting... Think they could have done better there. Still nice to have some live stuff. Collecting b sides, bonuses and live tracks from my fave artists is what I like to do. Is there any chance you can send me those XM live Melody tracks in a higher bitrate please? When and where were they recorded anyway?
5/15/2009

William Kates said…
Well allright Danyelle, nice to meet another music obsessive! "Collecting b sides, bonuses and live tracks from my fave artists is what I like to do." That's where I live as well. Drop me an email to wkates@hotmail.com.
5/15/2009