Saturday Video Fun: Celebrating the Release of Chimes of Freedom: The Songs of Bob Dylan (2012) 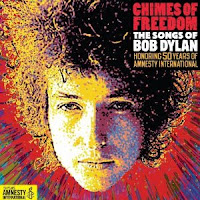 Chimes of Freedom: The Songs of Bob Dylan

This week Amnesty International released Chimes of Freedom: The Songs of Bob Dylan, to celebrate the 50th anniversaries of both Bob Dylan's career and the Amnesty Organization. As a socially conscious crusader for human rights, Dylan was a great fit. The album is a sprawlng tribute of 73 tracks filling four CDs with artists covering Bob Dylan's songs and the proceeds go to support Amnesty International.
There are many major and well-known names as well as plenty of unknown artists but the one thing they all have in common is a love for the man, his music, and his message. Thomas E. Davis of Seattle summed up Dylan's influence nicely in his Amazon review.
As for Bob Dylan, few artists have been offered accolades to match those laid at his feet. He's among the greatest poets of our age, a transformational figure in the history of music. There's not a singer or songwriter alive who doesn't owe a debt to his wit and wisdom, and thousands cover his inspiring, compassionate songs every day.

For starters we have "Tangled Up in Blue" from what is arguably Dylan's last great album (maybe his best), Blood on the Tracks, from 1975. This live version is from the Renaldo & Clara movie, filmed on the Rolling Thunder Revue tour of 1975.

Since Chimes of Freedom: The Songs of Bob Dylan is all about cover versions, next up is a favorite Dylan cover by Eric Clapton, also from 1975.

Next we have "Hurricane" from Desire (1976), the follow-up album to Blood on the Tracks. The song was about a boxer named Ruben "Hurricane" Carter who was believed to be not guilty of the murder he was incarcerated for. This live performance comes from 1975.

Finally, for a bonus video we go all the way back to 1965 for one of the first ever music videos, "Subterranean Homesick Blues".