Lorde - "Royals", From New Zealand to Nine Weeks at Number One in Billboard and World Domination; The Album's Good Too 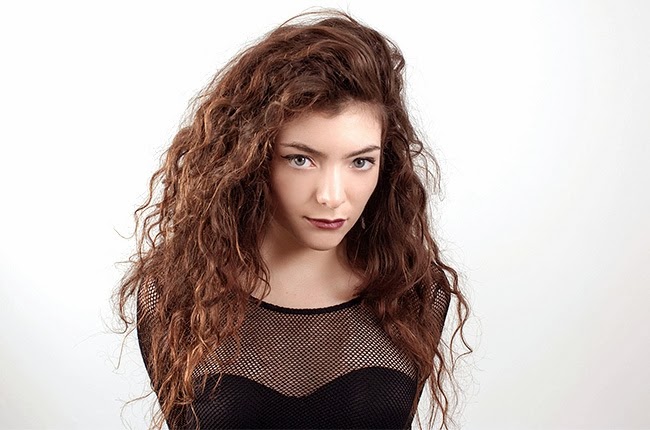 The top three on Billboard's Hot 100 this week looks like this:
1. "Royals" - Lorde (87M views)
2. "Roar" - Katy Perry (176M views)
3. "Wrecking Ball" - Miley Cyrus (291M views)
Totally unknown at this time last year, Lorde (Ella Yelich-O'Connor), a sixteen year old singer-songwriter from New Zealand, muscled aside two of the behemoths of the pop chart, not only displacing Miley Cyrus after "Wrecking Ball" had spent but two weeks in the top spot, but owning the Hot 100, this being the fifth consecutive week for "Royals" at number one.

On November 1st "Royals" entered the British singles chart at number one, as it also did in New Zealand when it was first released there in February. Lorde and "Royals" are a genuine phenomenon, and not just for the amazing chart performance. Lorde and her song are, in almost every way, the opposite of what normally fills the pop chart. We'll leave the sociological analysis to someone else, but we will suggest that maybe after a steady diet of dance and hip hop, and calculated outrageousness (marketing), maybe the pop world was ready for something real.

If you are not already familiar with "Royals", you may be living a sheltered life. In any case, let's start there. 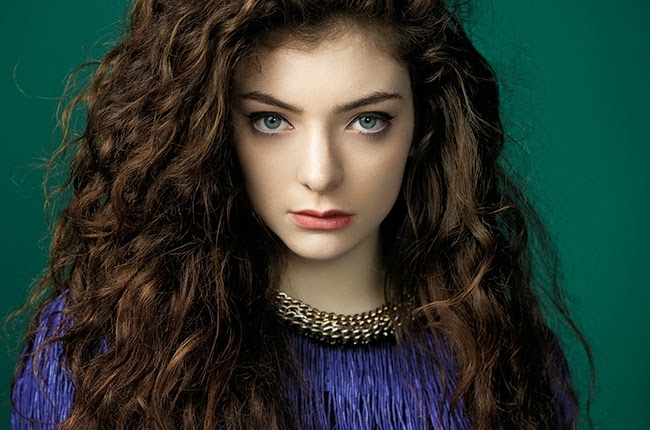 "Royals" has gone platinum with more than a million copies sold in the US. One huge reason for this kind of success is its massive crossover appeal. Even though the music audience has been splintered as many ways as there are flavors of music, "Royals" has been embraced by a wide array of listeners. At radio, "Royals" gets played on most every format, pop, most types of rock, urban, soul, and hip hop. Gather together any random group of people a who listen to different stations and odds are that they will all know "Royals". This kind of crossover has the magnitude of "Crazy" by Gnarles Barkley. 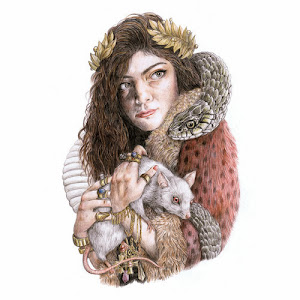 Lorde was discovered singing in a school concert and was signed to a recording contract. She had never written a song. She was all of twelve years old. In the Guardian of 10/10, Alexis Petridis wrote, "As it turned out, it took her a couple of years, and the arrival of co-writer and producer Joel Little, to come up with the songs she began posting online last year, insisting that her record label "leave it alone – don't promote it, no ads, let it grow organically"."

Jon Pareles, in the NY Times, 10/1, wrote, "What is “Royals,” by Lorde, the New Zealand songwriter who performed at Webster Hall on Monday night, doing in the Top 10 alongside Miley Cyrus’s “Wrecking Ball” and Katy Perry’s “Roar”? Most of all, it’s insisting that pop listeners don’t have to settle for clichés." Petridis continued, "You can understand why people have compared its chilly, hip-hop influenced electronic pop to Lana del Rey, but the real difference lies in the words, which Yelich-O'Connor writes alone, and which are uniformly fantastic, big on withering critiques of the glaring disparity between the moneyed glamorous lifestyle pop culture presents to its teenage consumers and the reality of their suburban lives." 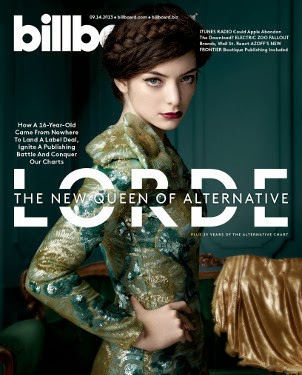 In a 9/6 cover story, Billboard wrote, "In a generation of endless selfies and attention-hungry YouTubers, Lorde courts enigma, harking back to the mid-'90s heyday of alternative dark-stars like Mazzy Star and Portishead that preferred to let their music do the talking."

"Speaking on the phone, Lorde is as demure as she is incisive, but for the most part, the biggest breakout star of the year is a disarmingly regular teenager. She enjoys going to the beach, riding her bike, making dinner and "mucking around," as she puts it. She's a huge fan of Nicki Minaj ("She's so fucking good I can't even fathom it"). She's the kind of whip-smart teen who has a lot of older friends as a result." Read the complete article. 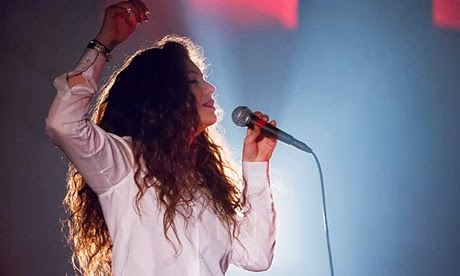 Pareles' piece was a review of Lorde's 9/30 performance at New York's Webster Hall, "She’s a reflective, even somber young woman. Her set at Webster Hall — the first of three sold-out New York City shows this week — was purposely stark.

She wore a demure black dress and was accompanied by only a drummer, a keyboardist and recorded tracks with her multilayered vocals; behind the musicians were spotlights on stands, nothing elaborate. Apart from the backing vocals, which welled up like phantom choirs, her songs were similarly austere: keyboard parts that might be as sparse as a bass line and a chord or two and subdued, unflashy drumbeats." Read the complete article. 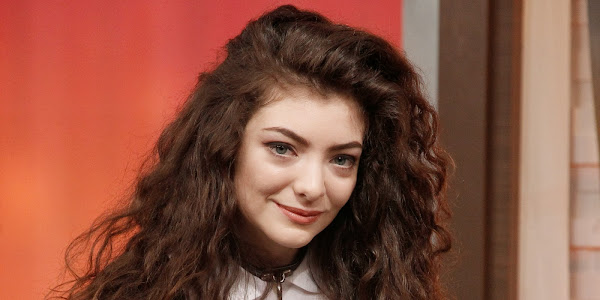 Photos courtesy of Lorde, Billboard, and the Guardian

The Petridis article is a fascinating interview piece titled, "Lorde: 'I'm just a freak', which continues, "They suggested she put out an album of soul covers: she refused, telling them she wanted to write her own material, even though she had never written a song in her life, only short stories (albeit short stories influenced by Raymond Carver, her favourite author "when I was a kid") and had no idea what she wanted her music to sound like.

"They were pretty open-minded about it," she shrugs, as if a major record label taking orders from a 12-year-old who doesn't seem to have a clue what she's doing is the kind of thing that happens all the time. "They got straight away that I was a bit weird, that I would not be doing anything I didn't want to do, and they completely went with that. I dunno," she says, noticing my faintly incredulous expression, "maybe it was because the record company was in New Zealand. Anyway, it's cool that they were cool with that, because if they hadn't been," she laughs, "it wouldn't have been a very good outcome"." Read the complete article. 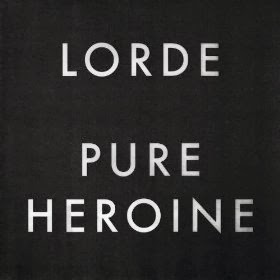 The album, Pure Heroine, was released September 27th and after a few spins it's clear that "Royals" is no fluke. Lorde and producer/co-writer Joel Little are excellent songwriters with a great sense of melody. Lorde's voice is compelling in a variety of different contexts. Little's production is as open and uncluttered as it is on "Royals", which really makes the songs that much more powerful, both musically and lyrically. The music is a co-write; Lorde writes all the lyrics herself. This week Pure Heroine is number five on Billboard's top 200 albums chart.

In the Pitchfork review of Pure Heroine, Lindsay Zoladz wrote that "there’s something endearing about Pure Heroine’s more unfiltered impulses—though she’s had a record contract nearly a quarter of her life, you get the sense Lorde is still being given a lot of room to breathe and hone her own particular songwriting voice. These tracks all feel like they were written by a very precocious teenager, and that’s a big part of their charm." It really is quite exciting to listen to an album like Pure Heroine, and find that there's a lot to like and that substance-wise, as extraordinary as Lorde's story and single are, they are only the tip of the iceberg.

Bonus Video #2: Whether you enjoy the fact that "Royals" knocked "Wrecking Ball" out of the number one spot or not, we can all agree that this next video is hilarious: Construction Workers React to "Wrecking Ball".