Rihanna & Kanye West & Paul McCartney - FourFiveSeconds, What the Hell is Paul Doing in This? 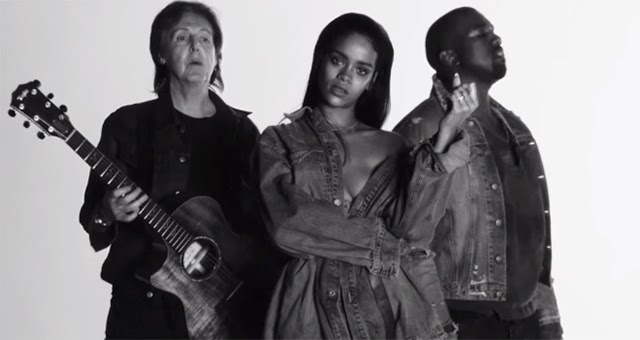 Rihanna & Kanye West & Paul McCartney released FourFiveSeconds on video and download on January 28, 2015. This track will be on Rihanna's eighth album, executive produced by Kanye West; release date is uncertain. Rolling Stone reported that Kanye also intends to include the track on his next album.

What the hell is Paul McCartney doing in this? His primary participation in the song and video seems to be instrumental only. In the Grammy performance (video below), Paul has a microphone and appears to be singing but he cannot be heard. Here is what we know.

1. The video is better than the song (it's an excellent video).

2. I like the song, but considering that Rihanna and Kanye are frequent flyers in the tabloids maybe it's not such a great idea to be "FourFiveSeconds from wildin'."

3. McCartney has a writing credit for FourFiveSeconds, but like most songs on the pop charts, this one was written by committee*. I would guess that McCartney's participation was just part of the deal.

4. This seems to be a package deal to write this song, record the song, appear in the video, and join Rihanna and Kanye for the Grammy performance.

5. There are two ways to look at this. After considerable review, I think that both are true.

a) Paul is a genius, who at 72 can record with anyone he wants for his own enjoyment, to surprise his audience, and to confound his critics. By collaborating with such well known purveyors of pop and hip-hop, Paul is expanding his own boundaries.

b) Paul McCartney is one of our greatest living songwriters who continues to write, record, produce, and perform and does not need the validation or publicity to continue to seem relevant. This is rather sad.

Here is the Grammy performance: 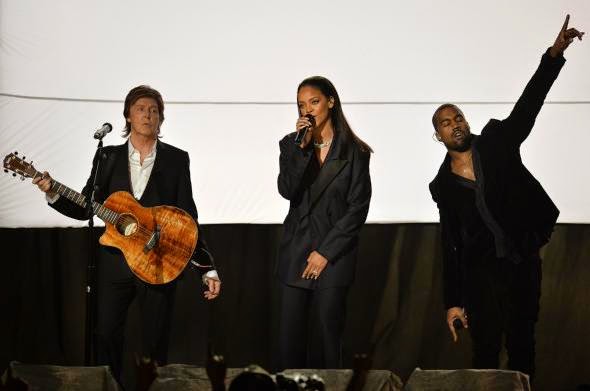 Bonus video: This is an excellent cover version of FourFiveSeconds by Jaime Wyatt.

Charlie Ricci said…
I really wanted to hate this song. However.....