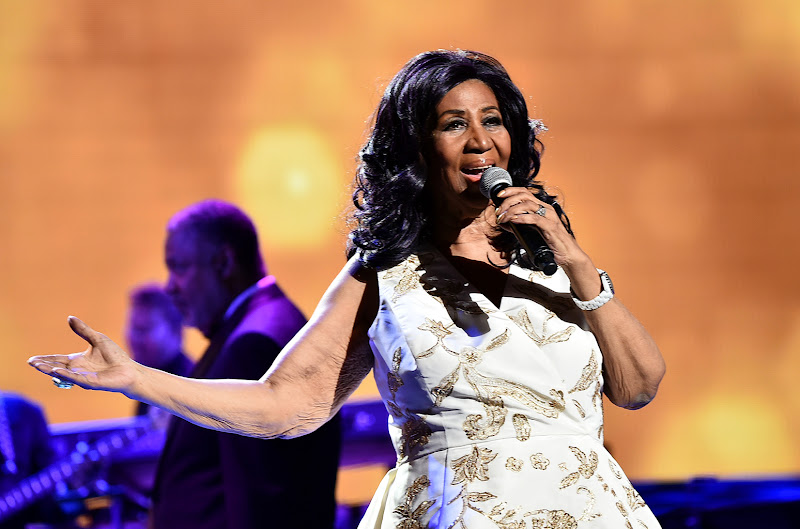 When I first started hearing Aretha Franklin on the radio in 1967, I knew that one day I would see her singing live. I didn't imagine that it would take fifty years though. Actually, we had tickets to see her last year in Bethlehem, PA as part of Musikfest, but the concert wound up being cancelled.

So it was with maximum anticipation that we took our seats at the Mann Music Center on Saturday night, August 26th.

The show was an old fashioned big production with no opening act and a large band on stage. In addition to four backing vocalists, there were as many as 21 other musicians, including a couple of dancers.

The band performed a medley of Aretha's hits. An announcer then introduced the Queen of Soul with a very old school style as Aretha took the stage.

She opened with "I Knew You Were Waiting (For Me)", a song that she sang with George Michael on her 1986 album Aretha. Then she dipped back to her 1976 soundtrack album Sparkle, written and produced by Curtis Mayfield for the title track.

Next up was the first of many highlights of the evening, "Until You Come Back To Me", a song written for her by Stevie Wonder. She followed that with a cover of Ben E. King's "Don't Play That Song (You Lied)", drawn from her 1970 Grammy winning album Spirit in the Dark. At last count, Aretha is the proud owner of eighteen Grammy awards.

On what has been called her "classic diva setlist", she next sang her 1967 hit "(You Make Me Feel Like) A Natural Woman."
Carole King wrote the song, but Aretha made it her own. Staying in the sixties, she followed that with "Chain of Fools", a song which reached #2 on the U.S. pop chart in 1968.

Aretha then left stage for a short intermission, during which her band stretched out with a nice instrumental take on Earth, Wind & Fire. I'll take this opportunity to mention a few things. It's been reported that when Aretha resumed her performance schedule earlier this year after a string of cancellations for health reasons dating back to mid 2016, she surprised audiences with a new svelte figure. Even though there is apparently less of her on stage, she still has that voice. The many musicians and singers in her band threatened to drown her out at times, but most of the time she surpassed the backing.

In my opinion, the large band is overkill; they may provide security but I don't think she really needs that much. The show's best parts I thought, were when the backing arrangements were minimal, or the times like in "Respect" when her high throttle voice dominated the backing. The other aspect of this show which was really special, took place in the second half when she spent considerable time talking to the audience with just the organ riffing behind her.

After the "intermission" Aretha retook the stage and talked about one of her mentors, Clara Ward of the Philadelphia based gospel group the Ward Singers, and with that Aretha transformed the Mann into a gospel church in which the band and back up singers sounded totally appropriate. Watch the video and you'll see and hear what I'm talking about. "Giving Him Something He Can Feel" was next, the set's second song from the Curtis Mayfield composed Sparkle soundtrack.

Before launching into "A Brand New Me", Aretha talked about starting her career in Philadelphia, reminiscing about some of the places she had played, and then she talked a bit about boxing and about growing up watching boxing with her dad, and introduced the daughter of boxing great Joe Frasier. These topics seemed spontaneous, which made a nice counterpoint to her otherwise scripted show. "A Brand New Me" is said to be the title track from an album that is planned for November release and according to reports will also include guest appearances by Stevie Wonder and Lionel Richie.

Aretha seemed revved up for her second set and next performed the B.B. King penned blues, "Sweet Sixteen". "My Cup Runneth Over" is an Aretha rarity, an outtake from her 1972 album Young, Gifted And Black; the track eventually found release on Aretha's Rare & Unreleased Recordings From The Golden Reign Of The Queen Of Soul (2007).

Next was the crowd pleaser "Freeway of Love", an extra long version, which with intro clocked in over fifteen minutes. Late in the song, Aretha left the stage for a short time, returning for the finish. She then tore it up with "Respect" as the encore. After the main vocal part of "Respect", she left the stage as the announcer said, "The Undisputed Queen of Soul, Ar...etha... Franklin," sounding like a boxing announcer. After the song ended, the band started playing a lengthy version of "There's No Business Like Show Business" during which Aretha came back out to take her bows, and when she left the stage again, the (ring) announcer repeated, "The Undisputed Queen of Soul, Ar...etha...Franklin." The instrumental music continued as the crowd filed out.

Earlier this year Aretha announced her retirement, see the full text below. She is retiring from touring but not performing. She plans to open a self-titled venue in Detroit that sounds very much like the one that B.B. King opened in NYC. That would make this concert part of her farewell tour, but she did say to the Mann audience that there are just a couple of places where she intends to perform a second time before she hangs it up, and Philadelphia is one of them. Seeing Aretha perform at age seventy-five is a complete privilege. She may be going off the road soon, but her music career shows no sign of slowing down.

Watch "Until You Back Come To Me"

She’s going home to Detroit, but that’s not all.
by Hilary Weaver, Vanity Fair
AUGUST 17, 2017

Aretha Franklin is settling down into retirement, but she’s doing it her way. The famous diva, who announced in February that she would be retiring after this year, now has a plan for her post-performance days. Per the Detroit Free Press, Franklin will be moving from her current home of Bloomfield Hills, Michigan, to a residence in Detroit. But she’s not just going to hole up in a luxurious home, watch old recordings of her performances, and lay low. This is Aretha Franklin. She’s building a nightclub in her hometown Detroit, where—yes—she will sometimes sing.

Franklin told the paper that she and Bruce Schwartz, Detroit relocation ambassador for Bedrock Real Estate Services, have been talking about this move for some years. Now, at 75, the singer is finally ready to make the jump.

“From time to time I would sing, and of course, I would have special artists come in to perform for the city that people in Detroit like—Detroit favorites,” she said of her future plans.

Giving up a life on the road for a regular gig in a single location is a common move for singers, and especially women lately, who have become famous enough that the fans will come to them. Celine Dion has been a Vegas staple since her show began in 2011. Britney Spears has been a regular face around Sin City since 2013. Even Billy Joel took on a Madison Square Garden residency in New York City. Bruce Springsteen, whose tours last years, is coming to Broadway!

But none have opened up their own clubs, much less named it after themselves; the Detroit spot, yes, will be called Aretha’s.

For now, Franklin will continue singing for the masses; the next stop on her tour is the Mann Center in Philadelphia, on August 26. Per Billboard, she is also working on an album with Stevie Wonder, Elton John, Lionel Richie, and Yitzhak Perlman, which will likely be released in January.