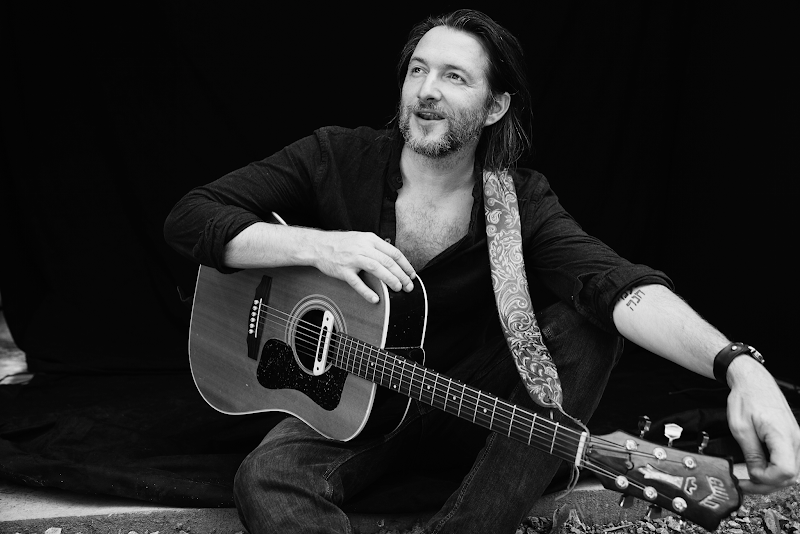 Matthew Perryman Jones brought his album release tour to Newtown Square's Burlap and Bean on Thursday, October 18th. This tour gave the Philadelphia area a chance to catch two Nashville based singer-songwriters at one of the area's best venues.

To play his most excellent new album, the The Waking Hours, Jones brought a band consisting of Erick Cole on bass and Josh Kaler on drums (Kaler also produced the album). With Jones on guitar and vocals, this show may have been as loud as it gets at Burlap and Bean. Opener Molly Parden also added some backing vocals to Jones' set.

After a lovely opening set by Parden and an intermission, Jones and his band took the stage and played the first five songs from his new album, in order, on the way to playing a total of eight out of nine songs that make up The Waking Hours.

After seven from the new one, he shifted gears and went to his trusty acoustic guitar for a solo, "O Theo", from the Land of the Living album. Next he fielded requests from the audience, offering up two gems complete with some detailed discussion of his songwriting process and what makes a song special to him.

The band, including Parden, came back on stage to play an emotional "Wrestling Tigers", which you can watch below. Jones and his band finished the set with four more songs from his catalogue.

“Close your eyes. Forget where you’re going. Joy can take you by surprise. Just let it in.” Those lyrics come from “Carousel", the one track from The Waking Hours that Jones didn't play at Burlap and Bean. The thought, however, comes very close to what Jones explained was the meaning of his final song, the cover of Tom Wait's "Take It With Me". The Waking Hours, which Jones described as cyclical, ended on that perfect note.

For that encore, he went solo acoustic. I won't go off on a Tom Waits tangent here. Suffice it to say that Jones shared his opinions of Waits as a songwriter and as an artist. I totally agree with him, and I would further add that I have come to think of Waits as a national treasure on the order of Bob Dylan.

Jones seemed to be enjoying himself during his set. As he got further along, he told more stories such as the fact that he was born in the Philadelphia area, Levittown to be exact. Having spent his first eleven years here, he picked up a Philadelphia accent. He said that when he moved to Atlanta, "My friends kept asking me how do you spell wooder? And I said W-A-T-E-R, and they said, 'That's water', and I said, No, that's wooder. Yeah, I've kind of lost a little of that, but when I'm around it I really like it."

It got really funny when Jones told the story (at Parden's suggestion) about pretending to be Irish the last time he played in Philadelphia. He described talking to a couple of women who were sitting at the bar after his show. In a perfect Irish accent he asked if they knew where to get a good Philly cheesesteak. They responded, "Are you Irish?" Yes, I'm from Ireland. "We were just at your show and you're not Irish." As he tried to explain, the bartender (with a thick Irish accent of his own) turned and said, "Oh, you're from Ireland, lad, where are you from?" The audience cracked up and Parden piped up that her favorite part was when they said, "We were just at your show."

"So, I make my Siri on my phone Irish so when she tells me directions it's like, 'Take a right.' But, I want her to say things like, 'You missed your turn love. Ah, it's alright, we're gonna work it out. Stop for a beer, we'll work it out.'"

Bonus Video: Watch "Anymore of This" by Matthew Perryman Jones and Mindy Smith 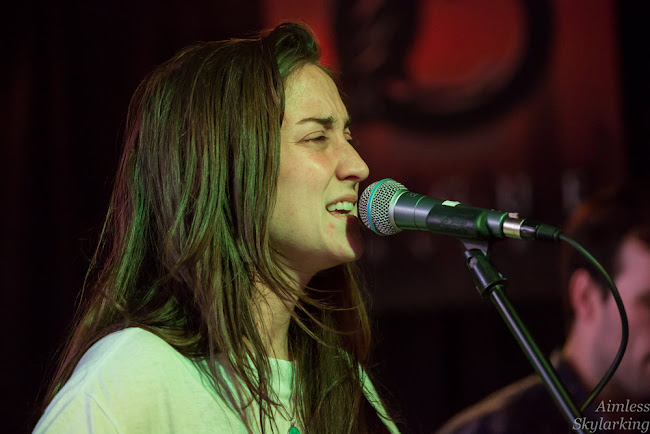 Not to take anything away from Matthew Perryman Jones but the real impetus to see the show was Molly Parden. Here's what happened.

Regular readers may remember my friend Dave, the retired exec from Sony/BMG Music. Dave also authored a website that was (and he is still) the web's best authority on singer-songwriters. One day last summer, Dave dropped an email about Parden. In only one listen to her recent recording of "Who Did You Leave For Me", I was taken; by the voice, by the song, by the production, everything.

The first stop was her website to see just what the deal was. While there, I looked at her tour dates and noticed that she was booked to play at Burlap and Bean with Matthew Perryman Jones. Having seen Jones at least twice before with the loose aggregation of independent Nashville artists, Ten Out Of Tenn, I knew that he was good. So, the decision to go was a no brainer.

My next move was to listen to more of her music. There were two recent singles and an EP, With Me In the Summer, plus a full length album, Time Is Medicine streaming, that was recorded when she was just seventeen (by my count). In addition to that voice, her music has an honesty that you don't often hear. The heartbreaks are not the product of any songwriting session, they're hers. She's lived the pain that she writes about.

At Burlap and Bean she performed a six song solo acoustic set, which took an emotional rollercoaster ride. As she put it, "Mostly down." We're not just talking everyday rejection or heartbreak here, "My heart ripped out of my chest and smashed on the ground."

Parden also talked about her songwriting process, which might involve a cold or dreary day driving around in her car. She also mentioned a morning when she was on her second cup of coffee and wondering if it was too early to have a drink (it was).

The set was good to hear; I would have liked more but it was nice that she brought the With Me In the Summer EP to sell.

The two recent singles, which both sound amazing, are from the new album that she's working on. I'm seriously looking forward to it.

Watch: "Who Did You Leave For Me"

*I didn't note the name of the song I am listing as unknown; when I asked Molly about it, she didn't recall either.

Bonus Tracks: Listen to the official singles of "Who Did You Leave For Me" and "Sail on the Water"