On the surface, few artists would seem more antithetical to the image of Frank Sinatra than Willie Nelson. We'll skip the revelations about his voice not giving away his age and I'll just point out that he knows his way around a standard; he's written a few in his long, storied career.

I'll rely on the Wikipedia to tell you that this is Willie's 71st solo studio album. That means that the number doesn't include groups that he was in, live albums, best of, etc. When you think about it, that number is truly staggering. That's Life is Nelson's second Sinatra tribute, his first being My Way (2018), and he's quite good at it.

On That's Life, we have fairly simple arrangements led primarily by piano, ably played by arranger Matt Rollings, and some exquisite steel guitar by Paul Franklin. The rest of the musicians are too numerous to name here, but there are plenty of gorgeous strings and saxes (among other instruments), and also, Dean Parks on guitars.

As many such tributes have done, That's Life was recorded primarily at the Capitol Records studio in Hollywood, CA where many of Sinatra's classic recordings were made. You may not be able to put your finger on it, but there is a definite vibe that is achieved when recording in that famed studio. It may be the resonance of the room, or it may be psychological, or maybe a little of both.

That's Life offers eleven tracks of prime Sinatra favorites. There are some standards like "Nice Work If You Can Get It" and "I've Got You Under My Skin." The Sinatra catalog is rife with tunes from the Great American Songbook. While this record includes some of those, That's Life concentrates more on songs that are associated with Frank and his legacy. I'm talking about material like "That's Life," the title track.

Play this album and I could go on and on about each song, but, I'll just mention a couple right here. Willie does a dynamic duet with Diana Krall on "I Won't Dance" (see video below). That's one of a great many songs in the Sinatra catalog that started out on the stage and /or screen, Also, I think of Jane Monheit when I hear it; it's clearly been covered so many times by classic artists from Sinatra to Louis Armstrong & Ella Fitzgerald and Tony Bennett all the way to Lady Gaga. Even with all that, there's no denying the delightful appeal of this duet version. I was about to wax on about how much I love the tune, but then came the title track, which is phenomenal in its own right.

There was no time to go further into That's Life when I heard the first notes of what I consider Sinatra's piece da resistance, "In the Wee Small Hours of the Morning." On most days I would tell you that it's my favorite of all Sinatra's songs, and I must say that Willie does it proud. Sinatra recorded it as the title song for his album in a series on Capitol Records that came to be known as the concept albums. Willie not only nailed the track, but the Sinatra album by that name served to inspire the cover art for this tribute. 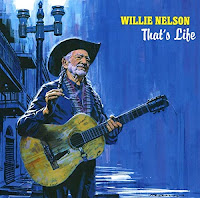 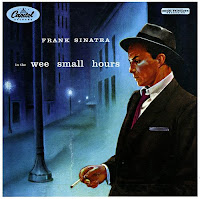 Producers Buddy Cannon and Matt Rollings put together a great sounding record commensurate with the excellent vocal performance by Willie Nelson. This album is a huge accomplishment for all concerned.

I feel like appreciation for Sinatra's music continues to grow over time and the field of tributes is getting well populated. But even though he is no Sinatra sound-alike, when it comes to tributing Sinatra, nobody does it better than Willie Nelson.

Songlist: 1. Nic
e Work If You
Can GeNathaniel Shilkret & Gene Austin © 1927
"Mr. Willie, you've done my daddy proud." Nancy Sinatra said to Willie Nelson on his SiriusXM show Willie's Roadhouse. "Such a great album. It's a good thing I wasn't on when you were playing 'A Cottage For Sale', such a beautiful rendition, 'cause I was sobbing."
Willie Nelson's Website
Willie Nelson's Facebook
Willie Nelson's Twitter