Photo courtesy of EMI/Black 47
To celebrate the band's 30th anniversary, Black 47 have released a superb tribute featuring seven guest artists who each recorded their choice of Black 47 song. Just one problem, leader Larry Kirwan disbanded Black 47 five years ago after they celebrated their 25th anniversary as a band. They had recorded a final album and gone out on a highly successful farewell tour with the last show broadcast live on the radio. 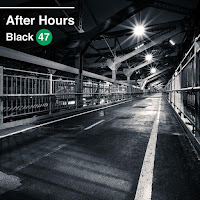 Fast forward to 2021. Even as a long term listener to Kirwan's Sirius XM radio program Celtic Crush, After Hours came as a bit of a surprise. Kirwan recently played the Screaming Orphans' version of "Sleep Tight in New York City," and while I was tracking that down I made the happy discovery of After Hours. When I asked Kirwan about the genesis of the briliant concept and execution, he replied: "The concept came from Pete Walsh of The Gobshites and Jon Birgé of Valley Entertainment. I merely suggested some of the artists."
I'm liking all seven of the tracks on this EP, especially the songs by Celtic Cross, Screaming Orphans, and The Gobshites. Kathleen Fee and her band Celtic Cross do a phenomenal job with "40 Shades of Blue" to start the record. Check out the video below.
If you are a regular listener to Kirwan's program, you'd probably know the voice of longtime friend Pat McGuire and when you hear his "Too Late To Turn Back," you'll know it's him without even having to check the credits. This one sounds almost like progressive Celtic rock. It strikes me as the kind of song that doesn't reveal all its secrets the first or second time through, sounding better and better over time.
On track 3, the Screaming Orphans exquisite version of "Sleep Tight In New York City" may be my favorite tune on the record. According to Kirwan, Screaming Orphans appeared on four or five tracks of the Black 47 album Bankers and Gangsters. They apparently chose their name to be the opposite of the reality that they are four sisters from Ireland. Their gorgeous vocals are partially responsible for one of the most compelling songs on After Hours. Kirwan went on to say "I love their version. It's great to hear the woman's side of the story. They are from Donegal so it's a perfect fix [sic]. The idea for that choice came from Staten Island Tom Marlow. The full story of that song and why the two lovers can't "connect" can be got from reading my novel, Rockin' The Bronx which was inspired by the song. I guess it's a Donegal/Bronx story." 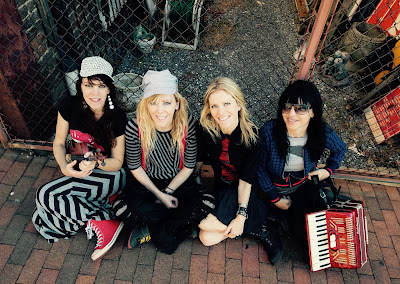 Photo courtesy of Screaming Orphans
Another track that I'm loving is The Gobshite's "Living In America." It sounds like the centerpiece of After Hours and not just because it's track 4. It sounds somewhat biographical (for Kirwan) and interestingly, the lyrics offer the guy and girl points of view while The Gobshites provide the corresponding vocals. The Gobshites seem like Boston's answer to Black 47. They describe their music as Celtic punk. Leader Pete Walsh has surrounded himself with a number of configurations, they now are taking an acoustic approach. With "Living In America" The Gobshites have made a track that you can't get out of your head, in the best possible way.
According to Kirwan, "Each artist was encouraged to interpret the songs - but not necessarily to imitate them. So, they had a lot of freedom." On "Desperate," Rory K. (Larry's son) does precisely that. It's a new version, but it still rings true to the spirit of Black 47's original.
Gary Óg, from Glasgow, Scotland and a disciple of singer-songwriters like Bob Dylan, Christy Moore, etc., turns in a fine version of "James Connelly." I couldn't help noticing the wee lyric change on the cover version. The few times that the original refers to "the working man"  Óg changes that to "the working class," which is consistent with the rest of the song. Although the distinction is close enough for rock and roll, it's worth noting that  Óg's cover is now gender neutral. Like Black 47, Óg shares a penchant for songs political.
Martin Furay closes the EP with a most imaginative take on "Rockin' the Bronx" that puts the punk in Celtic punk, reminiscent of Ian Dury and the like.
About the song selectons, Kirwan said, "... Kathleen Fee from Celtic Cross and Pete Walsh from The Gobshites are old and dear friends. They knew exactly what songs they wanted. In fact each of the artists on the EP was adamant about their choice. And they were right."
This EP is but the first installment of the After Hours project. Kirwan explained, "Yes, there will be 3 other EPs of roughly 6-7 songs each. My guess is that the next one will be for September and then we'll see when the third one will be."
The more I listen to After Hours the more I am liking it in its entirety. What that says is that these artists have done an outstanding job interpreting the songs of Black 47. They also shine a spotlight on some great material, which we kind of knew. I'm seriously looking forward to the next one.
Watch the Celtic Cross video for "40 Shades of Blue"
Larry Kirwan has not exactly been sitting on his arse since 2016 when the group disbanded. At any given time, Kirwan has a number of active creative projects brewing, be they broadcast, musical, theatrical or literary. Recently, Kirwan released his latest novel, "Rockaway Blue." Here is a preview.
Song list: Click on song name to listen
Black 47 Website
Black 47 / Celtic Crush Newsletter - Request by emailing blk47@aol.com