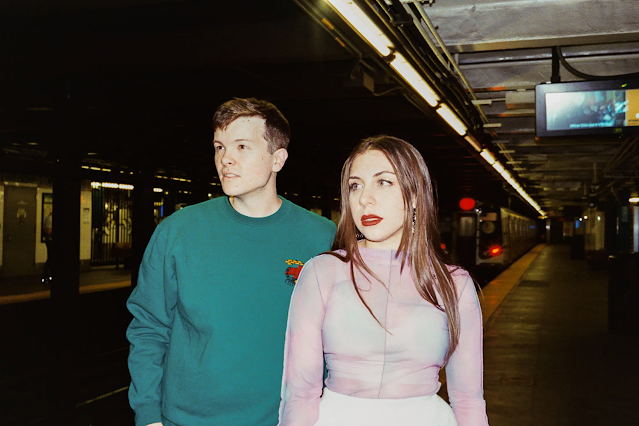 Photos courtesy of the artists

Having gotten their start in 2014 posting DIY videos that went viral due to their artistic excellence, Martina DaSilva and Dan “Chimy” Chmielinski performing as ChimyTina, released their debut full length album in 2019. The album, which featured their take on a number of Christmas classics, knocked me out with its groundbreaking arrangements and the sound of their performance, especially the voice of Martina DaSilva. I enjoyed it so much in fact, I sought out DaSilva's earlier work with The Ladybugs. The jazz repertoire of Christmas music has been done so many times in so many ways that to break through you really need to do something different and do it quite well. That they did. 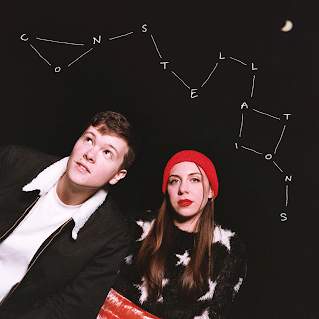 For their second album Constellations,  ChimyTina applies their innovative arrangements to some jazz standards, as well as a pair of new originals penned by DaSilva. The originals are "Twin Flame" (watch the video, below) and "My Universe".  The basic composition of ChimyTina is Dan Chmielinski (Chimy) on upright bass and Martina DaSilva (Tina) on vocals. The amazing part is that their combined sound is so complete that you won't even miss the players that aren't there.
Even still, most of the tracks on Constellations
feature special guests whose solos beautifully add to what Chimy and Tina are laying down.
The original, "Twin Flame", has no special guest on the album version, but it does have Chmielinski playing triple-bass by multi-tracking. The other original, "My Universe", features a superb vibraphone accompaniment by Joel Ross.
Marquis Hill adds his distinctive trumpet to two tracks, starting with the jazz standard "I Want to Be Happy," which opens the album. Hill also plays on "Smile," the Charlie Chaplin standard (written by Charlie Chaplin, John Turner and Geoffrey Parsons), which rarely sounds as good as it does in ChimyTina's capable hands.

Regarding the second song, the press release refers to DaSilva's background, "A common thread throughout the ChimyTina discography is the nod to Martina’s Brazilian heritage. Here, this is realized on “As Praias Desertas,” a lesser known Antônio Carlos Jobim composition. Augmenting this entrancingly beautiful arrangement is Ken Kubota whose versatility as both a classical cellist and accompanist, with his guitar-like strumming mastery, shaped the arrangement into a full-fledged spectacle that paints a vivid image of 'deserted beaches'. " "Deep Night" (Charles E. Henderson, Rudy Vallee) features special guest Andrew Renfroe on a very mellow guitar. Renfroe similarly brings his tasteful touch to "It's All In Your Mind", written by Charles LaVere.
Most listeners will recognize the George and Ira Gershwin tune, "Nice Work If You Can Get It", which features the tenor saxophone of Lucas Pino in a splendid arrangement. Pino's sax is also key to the arrangement of "I'll Never Be The Same". The song, another jazz standard, was written by Matty Malneck, Frank Signorelli and Gus Kahn.
Special guest Grace Kelly's alto saxophone helps give "Trouble In Mind" a decidedly noir-ish feel. Kelly is a gifted young phenom; a singer, songwriter, and musician with an enormous list of accomplishments. "Trouble In Mind" was composed by Richard M. Jones.
I feel like Norah Jones paved the way for the type of arrangement that ChimyTina gives to the Hank Williams' composition "Cold, Cold Heart".  You have to love the way that with just a bass backing, DaSilva's vocal makes all other instruments unnecessary.
For the last song: "The album finale features a triple-bass arrangement of a song near and dear to both Chmielinski and DaSilva: Billy Strayhorn’s “Lush Life”. Here, Chmielinski aims to invoke awe, reflection and elegance in a fresh take on a classic recorded so many times. Inspired by his upbringing around bass ensembles, the bassist demonstrates both accompaniment, lyrical bowing and a virtuosic solo aiming for nothing short of an authentic relationship that he has to this song" (from the press release).

So, I would say that ChimyTina is two for two in long players released, and we can enjoy this one while we see what this dynamic duo does next. Below the tracklist for Constellations, watch the complete album release show at Joe's Pub for a taste of what they sound like live.

"I wrote this song specifically for our new album, "Constellations". We recorded it a few months after the other songs were finished, and we unfortunately didn't get any of that session on film. I still really wanted to make a video for this song, so we decided to do a live version in my living room! Chimy wrote & played a gorgeous, triple-bass accompaniment for this one, which can't be done live (he's only one person lol) so we enlisted our dear friend, guitarist Gabe Schnider, to help us bring it to life at home. Hope you enjoy :)" - Martina DaSilva