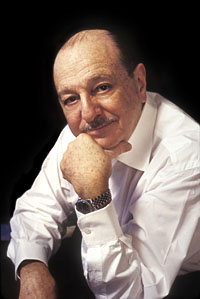 Arif Mardin, one of the all-time great record producers died on June 25th at age 74. In conjunction with the two founders of Atlantic Records (Ahmet Ertegun & Jerry Wexler), Mardin's extraordinary talent as a producer not only aided the success of the label, but his steady hand helped create a large catalogue of music that we've known and loved over the last forty years. Many excellent articles have been written on Mardin, a good reference point would be the Wikipedia biography, but the following appreciation was written by Alan Gorrie of the Average White Band and posted as a "White Paper" (one of his continuing series of diary style essays) on the AWB website:

We sadly say goodbye to Arif Mardin who passed away on Sunday. It would be fair to say that none of what we have today could have happened without him. Like so many of his protégées, almost all of whom became his musical family, he gave us the knowledge and the poise which turned our raw talents into something magical, and set us on the road to explorations and achievements we might only have dreamed of.We all remained close to Arif and his family – he and Latife were like an aunt & uncle to us - and their children, Nazan, Joe and Julie have grown up to be our friends. I can only imagine their sense of loss, and our hearts are with them in the void that he has left.

Luckily, Steve, Onnie and myself had the great fortune to be able to contribute to his last recording session just a week ago in New York, and the album he was finishing will be safe in the hands of his son, producer Joe Mardin, to lovingly add the finishing brush strokes to his life’s work – a luminary career which helped launch and establish everything from The Young Rascals in the late 60s, to Norah Jones in this new Century, and with accolades, triumphs and associations along the way which include Aretha Franklin, Donny Hathaway, Roberta Flack, Bette Midler, Chaka Khan, Bee Gees and ourselves to name but a smattering of those he has gifted with his inimitable touch.

Unfortunately we won’t see his like again; his manifesto was always that of the artist and his priority was devoting himself to showing each of us the right voices and grace notes to add to the expression of our ideas - and turn them into records that would not only stand the tests of time, fashion and changing cultures, but would become icons for generations of music lovers. His opinion was still currency and his word was bond. He never wavered in his belief that music, while the queen of our souls, was still an unfinished & imperfect lover and that there was much yet to be discovered, molded and experimented with. We will try to carry that torch on as our legacy from a consummate master, a beautiful soul, and a great friend to us all.

We love you, Arif. Thank you and farewell.