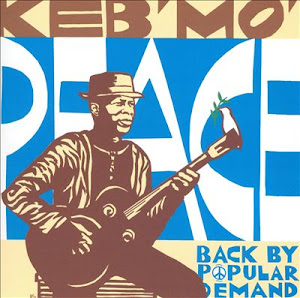 Continuing Series:  Keb Mo started out in 1994 playing acoustic blues inspired by Robert Johnson, usually filed with Taj Mahal. His voice has a highly appealing mellow tone with a touch of world-wearyness that makes him feel like an old friend and makes anything he sings eminently enjoyable. Although he still gets the bluesman tag, he hasn't made a blues album in years. He is a gifted singer, guitarist, and songwriter whose records have more in common with Carole King than B.B. King. He has a soulful James Taylorish vibe, and impeccable taste in covers. On his last album for example, he did the Eagles' "One of These Nights", a tremendous song to start with, and I like his cover as much as the original, if not more.

His choice of covers was key on 2004's Peace....Back By Popular Demand because the album is all covers save for one original. It's a collection of peace and protest songs from the sixties and early seventies, the track list is below. These songs have held up really well; they sound fresh and somehow, no matter how much progress each new decade seems to bring, these songs remain as relevant as ever. Considering that America is divided on everything from race to politics, that we have a steady stream of mass shootings with no hope of meaningful gun control, and that we live in a world where there are too many wars, too much oppression and too much suffering, we need these songs now more than ever.

Listen to "Wake Up Everybody"


Listen to "The Times They Are A Changin'"