The Grateful Dead - 30 Trips Around the Sun, Massive 80 Disc Box Set Celebrates the Dead's 50th Anniversary, Yes I Did, Updated With Unboxing Video 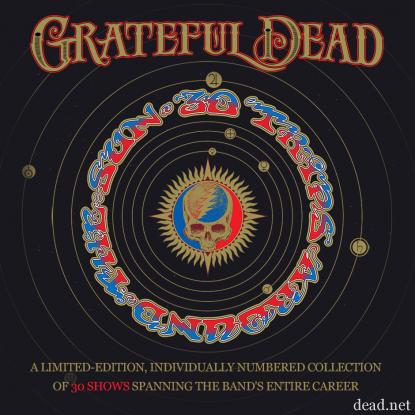 To celebrate the 50th anniversary of the Grateful Dead, Dead.net will release a ginormous 80 disc live box set, entitled 30 Trips Around the Sun. The set includes thirty complete concerts, one for each year that the band was active; they have selected the best show of each year (all shows previously unreleased). I may be in the minority here, but since first hearing The Dead in 1969, I have always been in it for the music.

I tie-dyed my speakers after seeing The Grateful Dead's first annual dance marathon at the Manhattan Ballroom in NYC (1971). The New Riders of the Purple Sage opened, then after what seemed like an hour of tuning, the Dead started their set, around 11PM as I recall; they were still playing at 4AM when we left. In the 80's, I saw them at the Philadelphia Spectrum with my younger brother who had followed the Dead on tour, selling grilled cheese sandwiches in the parking lot, etc., etc. In 2004, I took my daughters to the Tweeter Center in Camden, NJ to see the Dead, the post-Jerry band that featured Warren Haynes; I wanted them to experience the phenomenon, and it surely was, with a virtual city outside the venue selling anything and everything. The Dead culture had come a long way since grilled cheese sandwiches.

Between Dick's Picks, Roadtrips, and all of the various vault releases, I certainly have more recorded Grateful Dead shows than I will ever have time to listen to in this lifetime. Still, I find this box set completely irresistible, and the fact that these shows will not be released any other way is not the only reason. Read the full scoop from Dead.net below. And if you have any idea of ordering, they are almost sold out. This set is due to ship September 18th with a limited run of 6,500 and of that less than 500 cd sets remain as of Monday, and there were less than 250 USB drives left. Full information is at Dead.net. 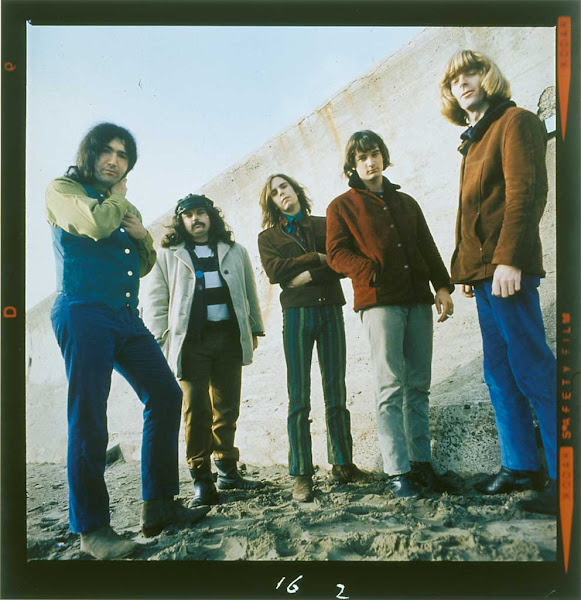 10/08/2015 Update: In late August, Dead.net informed purchasers of the box that there were production delays and that in order to make the box as good as possible, shipping could be delayed up to a month. This morning's email brought the following news:

"We are pleased to inform you that the beautiful sold out 30 TRIPS AROUND THE SUN boxed sets are beginning to ship (yep, finally)! In the spirit of the 50th anniversary and giving back to the fans, we've also included a couple of surprises. Along with the aforementioned book and scroll, you will find an original Grateful Dead concert ticket and backstage pass from the UCSC Grateful Dead Archives included as a token of our appreciation for your patience."

The following is from Dead.net:
"When we began discussing audio projects to commemorate the 50th anniversary of the Grateful Dead back in 2012, we knew we wanted to do something completely unprecedented. We could think of nothing more exciting or ambitious than a career-spanning overview of the band's live legacy focused on what best tells the story: complete concerts. Our first criterion was the very best live music to represent any given year in the band’s history. We wanted to make sure that there were not only the tent-pole shows that fans have been demanding for decades but also ones that are slightly more under the radar, but equally excellent. For those who listen to the entire box straight through, chronologically, the narrative of the Grateful Dead's live legacy will be seen as second to none in the pantheon of music history." - David Lemieux

We are more than pleased to announce the Grateful Dead's most ambitious release ever: 30 TRIPS AROUND THE SUN. Available as both an 80-disc boxed set and a custom lightning-bolt USB drive, the collection includes 30 unreleased live shows, one for each year the band was together from 1966 to 1995, along with one track from their earliest recording sessions in 1965. Packed with over 73 hours of music, both the boxed set and the USB drive will be individually numbered limited editions.

The 80-disc boxed set is individually numbered and limited to 6,500 copies, a nod to the band’s formation in 1965. Along with the CDs, it also includes a gold-colored 7-inch vinyl single which bookends the band’s career. The A-side is “Caution (Do Not Stop On Tracks)” from the band’s earliest recording session in 1965 with the B-side of the last song the band ever performed together live, “Box Of Rain” recorded during their final encore at Soldier Field in Chicago on July 9, 1995.

The box also comes with a 288-page book that features an extensive, career-spanning essay written by Nick Meriwether, who oversees the Dead archives at the University of California, Santa Cruz, along with special remembrances of the band submitted by fans. Also included is a scroll that offers a visual representation of how the band’s live repertoire has evolved through the years.

The USB drive version will be shaped like a gold lightning bolt with the Grateful Dead 50th anniversary logo engraved on the side. The drive includes all of the music from the collection in both FLAC (96/24) and MP3 formats and is an individually numbered limited edition of 1,000 copies.

GRATEFUL DEAD: 30 TRIPS AROUND THE SUN will not be available in stores or from any other online retailer - only at Dead.net. Shows will NOT be sold individually on CD. This Dead.net exclusive is sure to sell out quickly so pre-order your copy today and stick around as we will be revealing a mighty fine selection of music, art, and much, much more right here. FREE STANDARD U.S. SHIPPING ON PRE–ORDERS ONLY.