Halsey - New Americana, [Earworm Alert] Report From the Front Lines of Pop, The Next Generation Is In Good Hands, Debut Album Badlands Is Out Now 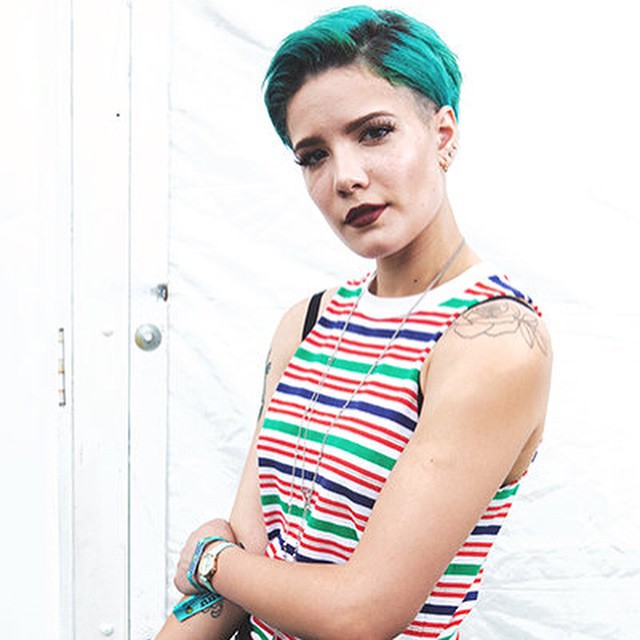 The other night I received the following text, "Halsey is on the radio right now on 104.5. I think she's from around here. Her voice is really good, check her out!!"

WRFF-FM, also known as Radio 104.5, is playing a song in heavy rotation called "New Americana" by an artist who goes by the name of Halsey. When they play it, they are also airing a station promo which says something like "This is Halsey and you're listening to Radio 104.5, the station I grew up listening to." Halsey was born Ashley Nicolette Frangipane in Washington, New Jersey. She thinks it's cool that the station she grew up on is playing her song, but this is hardly a local phenomenon. Now you have to hear "New Americana"; this chorus has a hook that's undeniable.

The chorus is somewhat biographical. Halsey's parents played lots of music as she was growing up; Biggie Smalls was one of her dad's favorites while Nirvana was one that her mom played a lot.

Explaining the video, Halsey recently tweeted "...it touches on a few subjects: police brutality, the martyr-ship of artists and the paradox of how an artists supporters more often than not save THEM, and the power of a youth collective and how they can make a change and become victorious when organized for a united cause. Its political, racially charged, and mildly disturbing. But not to mention incredibly beautiful and visually stunning."

The video suggests a number of parallels to the revolution in the Hunger Games' fictional dystopian future. "New Americana" really should be the soundtrack theme for the new Hunger Games movie that is opening this Thanksgiving, Hunger Games - Mockingjay Part 2.

"New Americana" comes from her remarkable debut album Badlands, actually one of the best pop albums I've heard this year. The first thing that strikes you about Halsey is the sound of her voice, so fresh, so strong, so soulful. The production places her vocal right up front and it is never upstaged by the music. It's all about her voice, the lyrics, and the music always amplifies the emotions in the songs, heightens the drama, but even when the musical fireworks are going off, it always knows when to get out of the way. Filled with great songs, Badlands has plenty to say, and never succumbs to pop cliche. She says, "I am Halsey. I will never be anything but honest. I write songs about sex and being sad."

Take the opening track "Castle". I'm not sure about the implications of "now my neck is open wide, begging for a fist around", but taken in another light, with or without a Game of Thrones consciousness, this song serves up the perfect metaphor for Halsey's place in the music universe.

I've listened to this album a number of times and there is a lot to consider. I'm not quite sure what she's going for in "Hold Me Down", whether she means the song literally, or if it's a fantasy, or it's a metaphor for something else entirely. On the other hand, Halsey's got some love songs which strike a different note, they're flat out romantic. The lyrics to "Roman Holiday" are all so good it's hard to pick a few lines. It opens with:


"Do you remember the taste of my lips that night,
I stole a bit of my mother's perfume.
Cause I remember when my father put his fist through
the wall that separated the dining room.
And I remember the fear in your eyes,
The very first time we snuck into the city pool.
Late December with my heart in my chest and the clouds of my breath
Didn't know where we were running to.
But don't look back."
There are two versions of Badlands, there is an eleven track standard version and a sixteen track deluxe version. The album is good either way. It seems like there are more explicit songs on the deluxe but either way, the lyrics serve the songs; the explicit language is never used for the sensationalism of the language itself. Compared to other top selling explicit albums, Halsey's explicit lyrics are downright sweet. Otherwise all originals, the deluxe version has a cover of "I Walk the Line" by Johnny Cash. This totally unexpected treat sounds so much like a Halsey song that most of her listeners may not realize that this song is over 50 years old.

As I was listening to "Control", I couldn't stop thinking that this artist does not seem to have a problem with self doubt, "and all the kids cried out, please stop, you're scaring me', I can't help this awful energy. Goddamn right, you should be scared of me. Who is in control?" The vocals on Badlands are so strong, so self-assured that this is a most accomplished debut. It's kind of cool that Halsey is just all of 21 years old. In late 2014, she released Room 93, a five song EP on the Astralwerks label. In 2015 she released her debut full length, Badlands. The song "Ghost" first appeared on the EP; it's also included on the album. Watch the video.

Continuing the "Castle" analogy, Halsey does, indeed, seem headed for the castle. A look at her tour dates reveals that almost every show is sold out. She has been getting excellent exposure, such as touring earlier this summer with Imagine Dragons, as their opening act. Just last Friday night (October 9), Halsey appeared on the Late Show with Stephen Colbert and performed "New Americana". 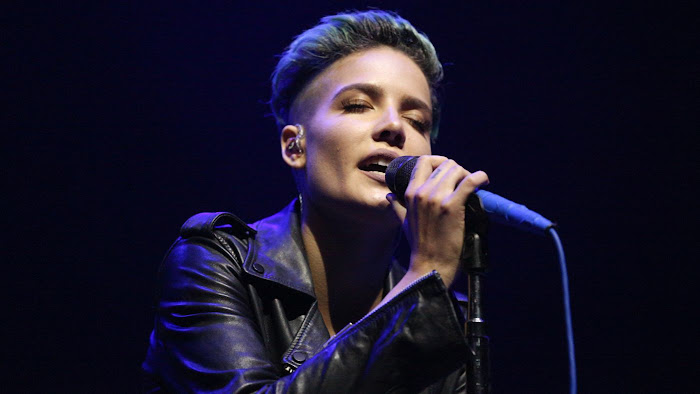 Regarding lost soundtrack opportunities, "Drive" really should have been playing at the end of the finale episode of the first season of Fear the Walking Dead. [spoiler alert] I can hear this song as the boat sails away from LA.

Halsey got her start DIY, posting live cover songs to YouTube. She was one of the lucky ones to make it, but it's clearly not all luck. Regarding the stage name Halsey, she has said in interviews that "Halsey is an anagram of my first name, Ashley. I grew up in New Jersey, and I would always take the train into New York, and I was getting into a lot of trouble. When I was 17 I was seeing a guy who was 24 and he lived on Halsey Street in Brooklyn. That’s where I first starting writing music and where I started to feel like I was a part of something bigger than my town in middle of nowhere New Jersey. Halsey is kind of like a manifestation of all the exaggerated parts of me [Ashley], so it’s like an alter ego." -Nylon Magazine

In this Vevo Q&A video, meet Halsey and hear her answer some interesting questions from fans. 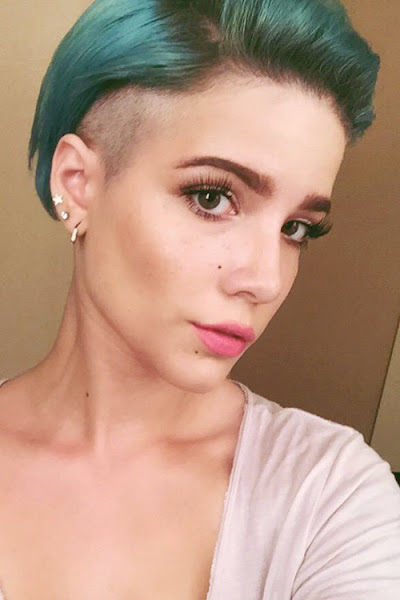 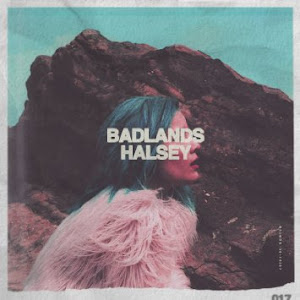