The Mar-Y-Sol Festival Album Headlined By The Allman Brothers Band, B.B. King, ELP, The J. Geils Band, And Dr. John; Long Out Of Print But Now You Can Download It Free And Much More Including Billy Joel 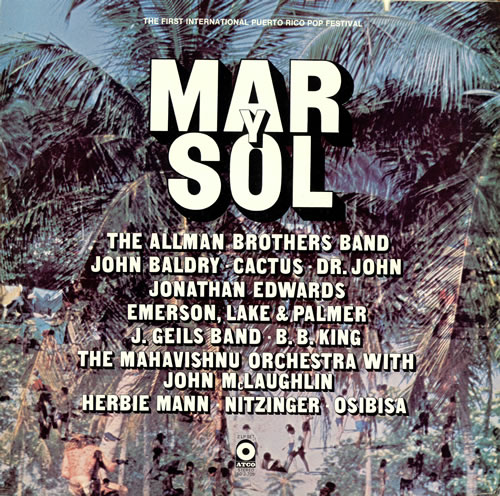 Why I Love the Internet: The other day, I was listening to some new two disc remasters by Emerson Lake & Palmer, their first three albums in what will be a major overhaul from their catalogue this year (I will write, in detail, about these soon). The reissue of Pictures At An Expedition has some extraordinary bonus material, including a nearly 15 minute recording of a live Pictures medley from the Mar Y Sol Festival, a rock festival held in Puerto Rico in 1972.

In the wake of Woodstock, a number of festivals were held attempting to recreate the magic. They were usually followed by an album; The Atlanta Pop Festival comes to mind. I remember the Mar Y Sol album from playing it on the radio; it was a two record set with a wealth of great and interesting artists represented. As I listened to that ELP Pictures album, I was thinking about the eventual blog article and I started to wonder if this live Pictures medley had been included in that Mar Y Sol album back in '72. It only took a couple of minutes with Google to determine that the original vinyl album was long out of print and it had never been issued on CD. Inside of another minute, I was on a Mar Y Sol Festival history site and I was looking at this download page.

In the next minute or so that original album was downloading to my computer and I was listening to it. That's not all, this same page offers a bootleg of Billy Joel's complete set and a three volume audience recording made at the festival, more about those two boots in a bit.

It was such a joy to just be looking for the tracklist and have the entire record essentially fall into my lap. This was not the only time I've had that sort of experience, just the latest, and it makes me say that's why I love the internet. 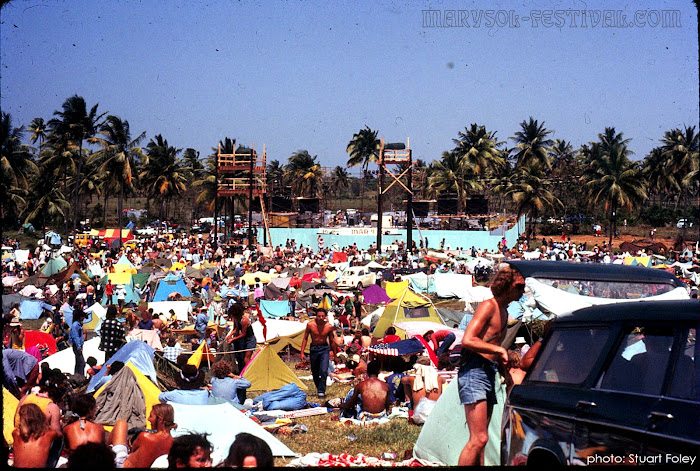 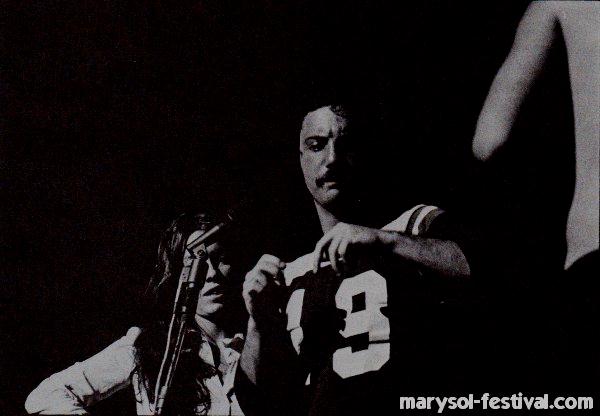 About The Boots: The Mar Y Sol download page for the Billy Joel boot links to a detailed discussion of Joel's set sequence and composition. The download consists of seven tracks, and although it has some sound problems, on a typical boot rating scale I would rate the sound quality very good. It probably has to do with speed and EQ; it sounds somewhat thin, lacking in bass. For Billy Joel fans, this recording has real historical value. This is one of his very earliest live performances and he sounds very young. The killer tracks for Joel fans are the two encore cover songs. His first encore is "The Letter" and he does a fine impression of Joe Cocker's cover of the Box Tops classic. He sounds amazingly like Cocker. The crowd holds him for a second encore and he comes back with a rockin' version of "Jumpin' Jack Flash" which owes as much to Johnny Winter as it does to the Stones. Joel fans will love this.

The other offering on the downloads page is a three volume set of audience recordings made during the festival, The Collazo-Mandry Tapes, named for the two guys who made the recordings. There are thirty-eight tracks in all, and they vary in sound quality from very good plus to excellent. These recordings are remarkable; many tracks make you feel like you are front row center at the concert. During B.B. King's "How Blue Can You Get" for example, you can feel every pluck of his guitar strings and his vocal has such presence that you feel like you are looking back at him. Collazo and Mandry recorded a number of artists who weren't represented on the official album, including Dave Brubeck, The Faces, and Brownsville Station. One look at the track list below and you will see that this is truly a treasure trove of music from the Festival. 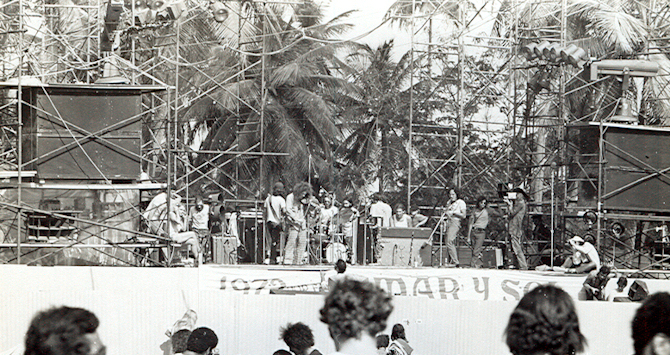 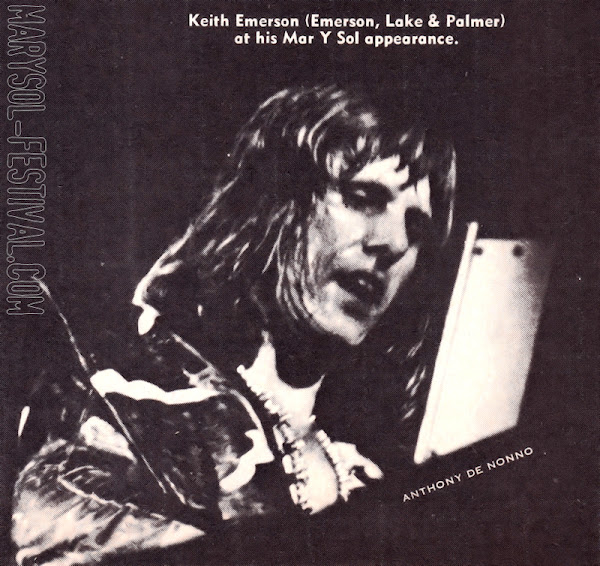 Notes:
About that ELP live medley of Pictures that I was originally looking for, although it was not part of the official Mar Y Sol album, it did eventually see release sometime later. It seems that in 2004, someone in the ELP camp discovered the original 16-track master tape of their Mar Y Sol performance in its entirety. It was lovingly remastered and released in 2011. It's now out of print.

The Mar Y Sol Pop Festival took place on April 1-3, 1972 at a site on the north shore of Puerto Rico. The location was in Manati, which according to Wikipedia, is about 30 mile west of San Juan. Estimates of festival attendance range between 30-35,000.

I want to single out Reniet Ramirez Rivera and say a major thank you for both the website and the downloads.


Even though I was born 5 years after MAR Y SOL took place, I’ve always had a passion for this subject. Always been a fan of rock music and always loved history. Add the fact that I have a special love for rock events/concerts that took place in Puerto Rico (I was born and raised in Puerto Rico, 1977 – 2003). The last day of the festival (April 3, 1972) was also the day my oldest brother was born.

I felt that since there was no web site, book or anything to learn about this event I might as well be the first one.

I’ve been very curious about this subject since 1993 when I accidentally saw the LP ‘ot ‘n’ Sweaty’ by Cactus (which contains 3 songs from this festival). But there was no source whatsoever to find out more about this legendary festival. In 2004 I officially started collecting everything I could related to Mar y Sol (eBay) and that same year I made a trip to Puerto Rico to visit family and friends and took the opportunity to go to 2 archives of old newspapers (1) El Nuevo Dia newspaper and (2) El Sagrado Corazón University where they have the archives for the “El Mundo” newspaper. That was the first time I really got a hold of a lot of detailed information and pictures I had never seen before. In early 2005 I decided to make the web site to be able to share all this information with the rest of the world. This would be my “book” about Mar y Sol.

It’s been a lot of hard work which for me is a very pleasant hobby. - RRR 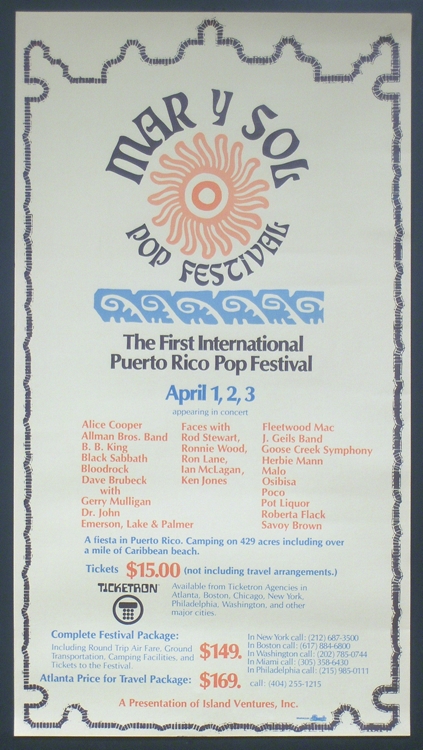 Charlie said…
I never heard the whole thing but I have a DJ sampler from a radio station on a 33 RPM, 7 inch record with ELP's "Take A Pebble/Lucky Man" on side 1 and and 2 great songs on the flip side: a version of J. Geils' "Lookin' for a Love," that is better than the one on Full House and a truly outstanding track from Jonathan Edwards' 1st album, "Sometimes in the Morning." On it his bass player backs his voice and guitar with a fiddle, turning this song into something really special. I'll have to listen to the rest of the downloads. If the album is as good as these 3 tracks Woodstock needs to apologize for its existence.
8/09/2016