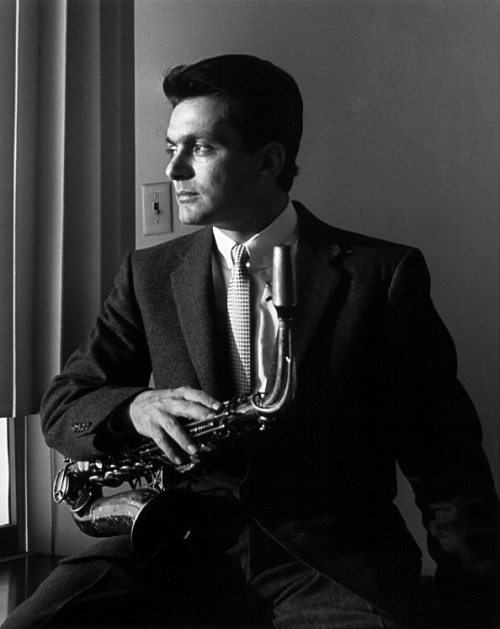 Art Pepper was an iconic jazz saxophonist who was fifty-six when he died in 1982. Laurie Pepper has made it her mission to maintain Art's legacy and to keep his work available. She has acquired many of his master recordings and oversees the reissues, sometimes with bonus material.

The Art Pepper Quartet is one of those classic albums that has just been remastered in honor of its sixtieth anniversary. This outing is one of Art's masterpieces, showing the range of his prodigious talent. The three other musicians in the quartet are also extremely high caliber: Russ Freeman on piano, Ben Tucker on bass and Gary Frommer on drums. "Diane" is a gorgeous composition that, we learn from the liner notes, was written about one of Art's previous wives. "Blues at Twilight", in addition to having some beautiful saxophone, also features extended solos by Freeman and Tucker.

The bonus tracks offered here take a terrific album and make it even better. Being able to hear the studio process, recording "Val's Pals" with the false starts and alternate takes, is utterly fascinating.

Pepper was a master saxophonist in all of his styles, but I want to draw your attention to the second bonus track, "Blues at Twilight" (track #9). I love, love, love when Pepper plays blues, ballads, and mood pieces. I can't think of anyone who is better at painting an emotion or mood with a sax. The released version of "Blues at Twilight" excels in all the ways I've described, and even though the bonus track is an alternate take of the same song, you can hear a difference of interpretation. While I love the original, the alternate take positively blows my mind.

I thank Laurie Pepper for this remarkable reissue. This album is extraordinary in a number of ways. It sounds absolutely amazing. You would never know that these sessions are sixty plus years old: this record sounds like it could have been recorded yesterday. I want to specifically recommend either the CD or the iTunes download of the 2017 remaster because they both come with the CD booklet. It contains the liner notes that Don Clark wrote for the original album cover. There are also new liner notes penned by Laurie Pepper, and in an excellent essay she describes buying the master from the original label as they were about to go out of business. She talks about all the labels who fail to pay royalties and she weaves a compelling tale. Laurie has become a musicologist and a jazz historian with a most unique vantage point from which she is able to describe events first-hand. Her piece gives context to the music with insight that is very rare. In Laurie's notes we also learn that this album is her personal favorite of all Art Pepper's career. I think that with some repeat listening, it could become mine as well. 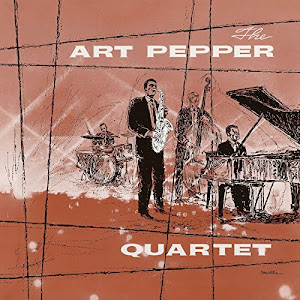 About the versions: This article refers to the 2017 remaster. There is also a 2015 release of this album, which is still available at Bandcamp. That version has the tracks in a different sequence with the bonus tracks first. It also contains fewer takes of "Val's Pals". And although I don't have definitive information on this, in my estimation the 2017 remaster has upgraded sound quality. There is just one more difference; the 2015 version has an additional track that is not contained on the 2017 remaster. That is track #13, which is labeled "Bésame snip, stream." For the sake of completeness, I will mention that iTunes also has a bargain priced download of the original seven track album, which is credited to the K-Tel record label. It is unclear whether this is the 2015 version of the album or some prior master. 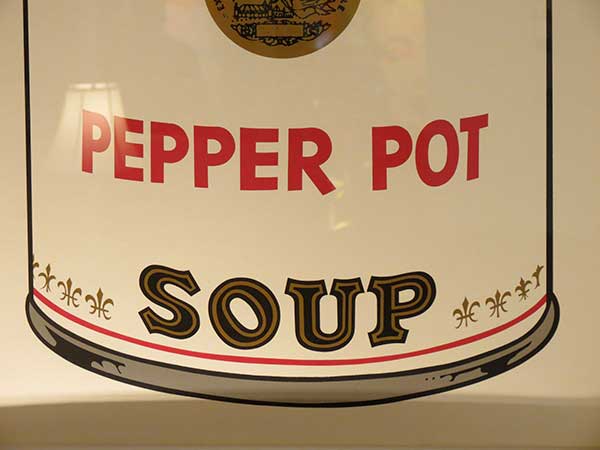 Recorded in late 1956 and released in early 1957, the same year as the landmark Art Pepper Meets The Rhythm Section, The Art Pepper Quartet (Art Pepper: saxophone, Russ Freeman: piano, Ben Tucker: bass, Gary Frommer: drums) is back for its 60th anniversary. Mastered from the original mono tapes by Grammy®-winning engineer Michael Graves, this CD and Digital edition was overseen by Art’s widow, Laurie Pepper, and Grammy®-winning producer, Cheryl Pawelski. In addition to the album’s 7 classics, this remaster includes 5 bonus tracks—alternate takes of “Pepper Pot” and “Blues At Twilight” (originally issued in 1990 in Japan) and a journey through the creation of “Val’s Pal” (including previously unheard incomplete takes and false starts) via 3 more tracks. New liner notes from Laurie Pepper trace the story of how her (and many folks’) favorite Art Pepper record was not only conceived, but ended up back where it belongs—with Art’s estate, and in the eyes, ears, and hands of jazz lovers everywhere. A gem on all fronts—this is how Jazz (and its history) should be experienced. Ladies and Gentlemen, please welcome back The Art Pepper Quartet. 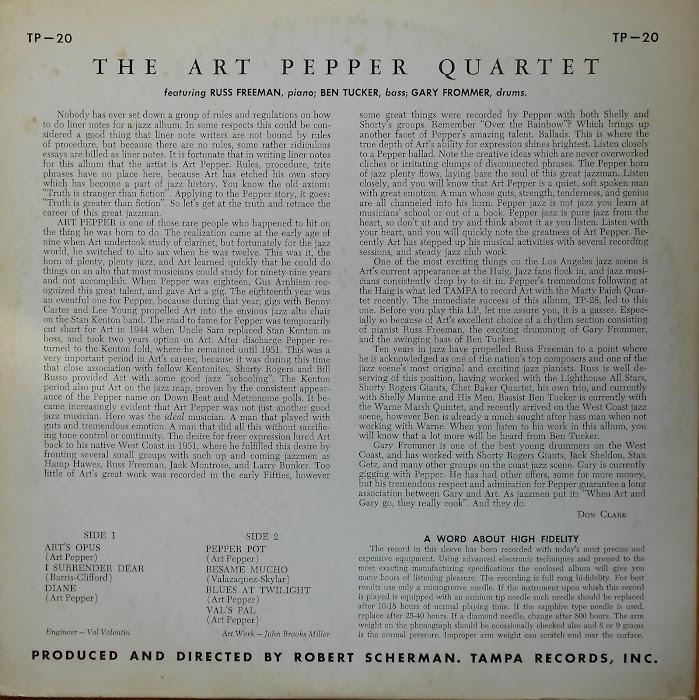