Bluebirds of Paradise - Balcony, A Jump To Lightspeed On This Exquisite Second EP 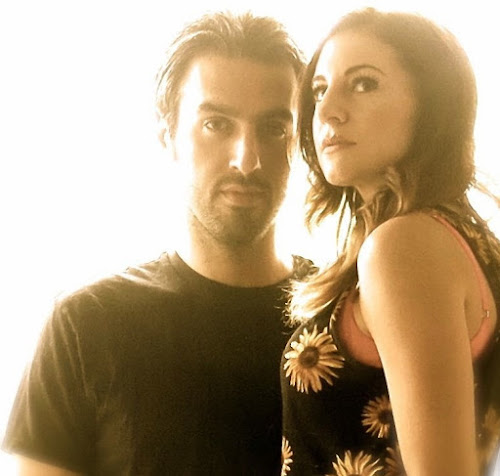 Photos courtesy of Bluebirds of Paradise
Bluebirds of Paradise is a project of singer/songwriters Chrissi Poland and Ari Hest who formed the group to express their mutual affection for the marriage of Brazilian jazz and pop known as Bossa Nova. They released their first EP, In A Night, in 2015.

Producing themselves this time, the Bluebirds convened some familiar faces to record within the friendly confines of The Carriage House in Stamford, CT. Joining Poland (vocals, Rhodes) and Hest (vocals, guitars) were returning musicians Will Lee on bass, Doug Yowell on drums and percussion, and Gary Schreiner on chromatic harmonica. In addition, Dave Eggar (cellos) and Aaron Heick (tenor sax) made their Bluebirds debut on Balcony. All songs were written by Poland and Hest. The recordings were engineered and mixed by Brendan Muldowney at The Carriage House. Additional vocal recording was engineered by Carl Barc at The Distillery in Brooklyn.

Before we continue, click on track one "Jenny" and listen to it, then I'll see you on the other side of the tracklist. 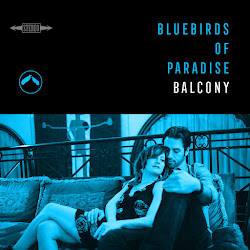 Buy at iTunes
Buy at Bandcamp
Stream on Spotify

Balcony is a total delight, all five tracks. The record opens with "Jenny"; it features cello, which gives the Bluebirds a fantastic new sound. "Jenny" also represents some terrific songwriting. The music and the vocals seem to be taking different leaps and dips, while the lyrics are more intense than you normally get with Bossa Nova. I'd say that "Jenny" would defy any genre label that you might want to put on it. They say, "'Jenny' has a darker tone, propelled by swirling cellos and a story of someone staring down their own mortality." This song is a triumph and a great way to kick off the record.

Much the same could be said about the next track, "Balcony". There is also some cello to be heard, but "Balcony" really sets itself apart with a gorgeous saxophone solo combined with another new peak in Bluebirds' songwriting. Track two is another gem.

Next up is "Brown Eyes", a track with a little more of that Bossa Nova beat and some serious harmonica that brings to mind the playing of Toots Thielemans. Schreiner's harmonica underlines the happy tone of this tune. They call this one "joyous", I wholeheartedly agree.

Track four is called "As It Should Be", which might be a fervent wish. The Bluebirds describe it as having a "70's feel in the groove that is reminiscent of Stevie Wonder's Talking Book era, with words that wonder if this world will ever come to a peaceful place." Schreiner's harmonica punctuates the track with a mixture of charm and hope, culminating in a glorious solo. This is Bossa Nova with a message.

Following that last song, logically, comes track five "What A World We Have Made". The Bluebirds tell us that it is "a lullaby and a love letter to the twists and turns of life with another, how all things must rise and fall, come and go." This, my friend, is nothing short of the very vicissitudes of life. The music is the basic Bluebirds band, with a bit of cello in a supporting role. There is a touch of wistfulness in the songwriting, which provides a perfect ending.

During some of these songs Chrissi and Ari sing together, note for note, and while that might not work so well for some vocalists, this pair sounds perfect together. Although I adore In A Night, I must say that with Balcony the Bluebirds of Paradise have raised their game to a whole new level. This record succeeds in every aspect: songwriting, performance, and production. Welcome to Bossa Nova that leads with its head as well as its heart.

Sara said…
Wonderful EP, great article. I loved the complexity of Jenny, but I think What a World We Have Made is my favorite Bluebirds song. Great hook, great harmonies and so refreshingly optimistic. Love it!
5/01/2018