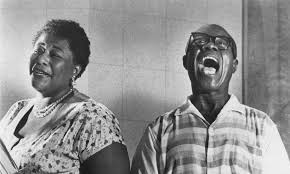 Photo: Phil Stern/Gilles Petard/Redferns
As I was going through the new releases recently, I noticed that Verve had released a 23 track deluxe edition of their Ella & Louis For Lovers, so I gave it a spin. This entry in the label's For Lovers series previously contained 11 tracks. This new expanded set is so good that I had to write about it.
Ella Fitzgerald and Louis Armstrong were already stars in their own right in 1955 when they got together to record an album of duets called  Ella & Louis. A year later, they made a second LP, Ella & Louis Again. This release is drawn mostly from those two LPs with the addition of three bonus tracks for good measure (two singles and a stereo version).
When these LPs were recorded, Fitzgerald and Armstrong were both at the top of their game. These selections sound like the cream of the Great American Songbook and the backing by Oscar Peterson and his trio could not be better.
Russell Perry (All About Jazz) shared the following regarding the recording of these LPs:

While Ella Fitzgerald was, like Oscar Peterson, managed by Norman Granz, recording exclusively for his labels from 1956 through the end of her recording career in the mid-1980s, Louis Armstrong made only a brief stop with Verve. The result was a series of discs from 1956 and 1957 that stand with the best of Armstrong’s massive catalog. Finally, Louis was teamed with musical peers of his own calibre in relaxed, swinging sessions that showcased his increasingly solid singing and mellow blowing. The sessions with Ella Fitzgerald still blaze with the glow of two topnotch masters; the two albums they shared are liberally peppered with classic renditions of some of Pops’ greatest standards. The Oscar Peterson Trio provided all the backing these two needed, resulting in the cleanest sound of any of Louis’ records.  - Michael Minn's “Louis Armstrong Discography"

This album opens with "Cheek To Cheek," and with all due respect to Lady Gaga and Tony Bennett who made a phenomenal album by that name, Fitzgerald and Armstrong make it seem so easy to achieve pure perfection.
Having grown up in the sixties, I used to think that the Mama Cass Elliott version of "Dream a Little Dream Of Me" had everything that you could want in that song... then I heard the Ella Fitzgerald version that's included on this album.
I'm sure I have heard shorter versions of "Let's Do It (Let's Fall In Love)," but this almost nine minute version adds whole new realms to the lyrics and in the buttoned up world of the 1950s, double entendre like this is as spicy as it got. And, this tune is really funny. I could go on like this about all of the songs, but I would certainly run out of superlatives.
When and if you decide to purchase this expanded deluxe edition of Ella & Louis For Lovers, there is one further thing you should know. Verve has also marketed a complete box set of everything Ella and Louis recorded for the label. Sold under different titles with different graphics in different countries, the three CD set contains the 3 LPs that they recorded together (Ella and Louis, Ella and Louis Again, and Porgy & Bess). Sharp-eyed shoppers might find a super low price on the set competitive with the new release.
Depending how much of a completist you are, that might make a difference. But, whichever way you go on this, you can't go wrong. 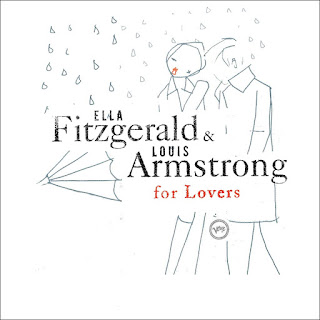